Global Plug-In Electric Car Sales March 2021: Over Half A Million

Global passenger plug-in electric car sales increased in March by 173% year-over-year to over 531,000, which is the second highest monthly result ever!

According to EV Sales Blog, plug-in market share increased to 8.2% (including 5.4% BEVs).

See more of our sales reports for March 2021.

From the global perspective, all-electric cars are still in a majority, but PHEVs notes a higher growth rate: 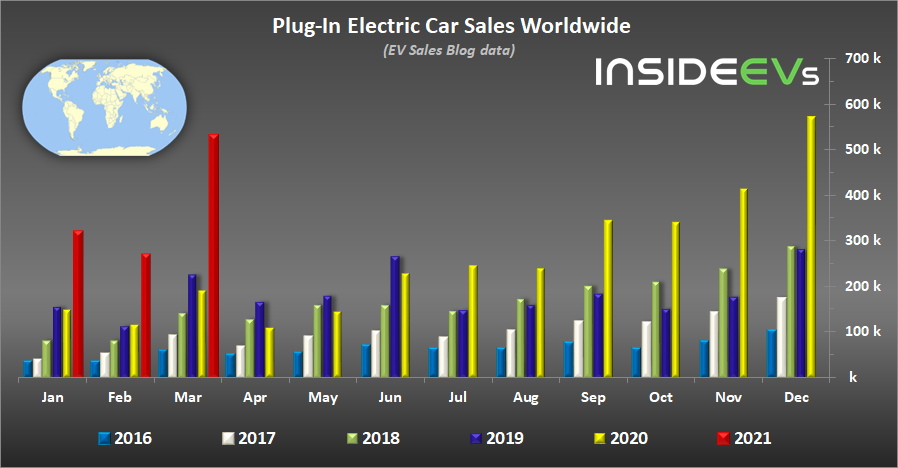 So far this year, more than 1.13 million of passenger plug-in electric cars were sold, which stands for about 5.8% of the total global market (3.8% falls on all-electric cars).

The Q1 rate is more than 4.5 million a year. Combined with the usual pattern of increasing monthly volumes down a year means that we might see more than in 2021 we will see 5 million units for the very first time.

March 2021 was the Tesla Model 3's month as a new all-time monthly record of close to 76,000 units was set. The Model 3 also returned to the top year-to-date with a big advantage over the second-best.

The second best is the tiny Wuling's Hong Guang MINI EV (not really a car, but rather a kei car), while the third is Tesla Model Y, which also stands out by its high volume.

In our opinion, it's a matter of time when Tesla Model Y will the #2, especially with the two additional manufacturing plants.

The next three best for the month were Hyundai Kona Electric, Nissan LEAF (surprise) and Volkswagen ID.4 with 6,568 (already above ID.3).

Volvo's plug-in hybrids (XC60 and XC40) continue to be the top PHEVs.

Tesla remains the top-selling electric car brand and in March it set a new monthly record of over 108,000 (first six-digit result ever) for a total of 184,500 YTD (all Tesla numbers estimated). 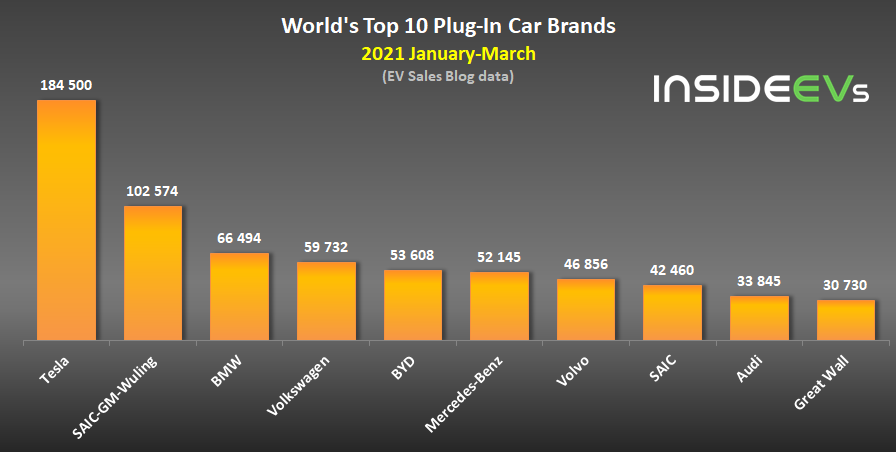