Mercedes-AMG EQS Spied On The Nurburgring

It’s not going to give the Tesla Model S Plaid a run for its money, but at least 600+ hp, it will still be really quick.

Mercedes-Benz recently revealed the brand new EQS, its first electric vehicle designed from the ground up to be electric. There’s a lot to like about the EQS, namely its range, interior and gadgets, as well as the impressive acceleration provided by the EQS 580 variant that can sprint to sixty in around 4.1 seconds. However, there’s currently no dedicated performance variant.

Well, that will change come 2022 when Mercedes will unveil the AMG version of the EQS. The most powerful current model, the EQS 580, has two motors that together put out 516 horsepower and 611 pound-feet (830 Nm), but given its 2.5-ton weight, it can’t really do the benchmark sprint in under 4 seconds, and that’s not really good enough these days.

We don’t know how much more power the EQS AMG will have, but rumor has it that it will be in excess of 600 horsepower (some reports say it could have as much as 750 horsepower, but we’re still a few months, possibly a year away from learning the actual numbers). And we’re sure the numbers wouldn’t be the final ones, even if we asked Mercedes what they were and the manufacturer actually told us.

The Mercedes-AMG EQS is still undergoing testing and our spies spotted it doing the rounds at the Nurburgring Nordschleife, in Germany. They are sure this is the AMG model judging by the distinctly AMG-style wheels with gold AMG-branded calipers, as well as the completely covered front and rear fascias, as well as the doors and side skirts.

This is all consistent with places where Mercedes would change the EQS to turn it into an AMG. The car also appeared to sit lower on its suspension, which again would confirm it is a sportier offering. If it’s consistent with other AMG products, then its fenders should be a bit more flared compared to the standard car’s but we can’t really tell from the photos.

More on the Mercedes EQS 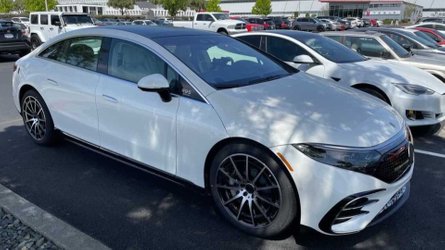 Mercedes EQS Seen Parked Outside Tesla Fremont Factory, But Why? 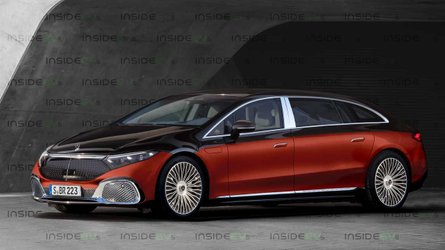 Mercedes EQS Maybach Would Be The Pinnacle Of Electric Luxury