As standard, it comes with a conventional circular helm, but if you opt for steer-by-wire, you get a yoke instead.

The exterior design of the newly revealed Toyota bZ4x may not be the most striking thing about the vehicle. While it is still branded a concept by Toyota, to us it looks production-ready in every single way, and while it will undoubtedly have many options for buyers to choose from, one in particular caught our eye.

Browsing through the official photos, we saw shots of the interior that featured a conventional round steering wheel, but also ones that showed a futuristic yoke (very similar to the one Tesla showed off not long ago, although this one from Toyota one looks closer to yokes used in aviation). Reading the press release, we learned that the yoke won’t come as standard on the vehicle (more traditional types will still probably opt for the traditional wheel), and that it will be optionally available if buyers will spec the available steer-by-wire system.

Toyota’s explanation as to why it also changed the steering wheel for a yoke with the steer-by-wire is simple: with the system, that no longer has a physical connection between the helm and the wheels, the driver will need to apply a lot less lock to make the car to turn, thus eliminating the need to take their hands off the steering wheel when negotiating tighter turns.

The automaker announces that this is the first time this has happened in a mass produced vehicle, while also adding that with the yoke, the fun-to-drive factor of the bZ4X is enhanced. Not much else was said about the system, but it’s one more reason to look forward to this model (co-developed with Subaru) hitting production in order to experience the yoke and steer-by-wire combo first hand. 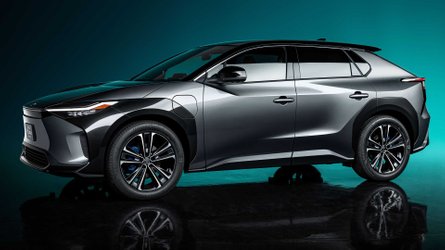