Someone Spotted The Ford Mach-E GT In Traffic

We don’t have any information about this photo, but the vehicle appears to be on Michigan manufacturer plates.

Ford will launch a performance-oriented version of the Mustang Mach-E electric crossover, the Mach-E GT and GT Performance, sometime this summer, but we have yet to see anything other the official photos of it - this is the first unofficial GT sighting that we know of. Ford still hasn’t officially revealed the GT, but we did find this photo on Reddit that appears to show an early example being driven in Michigan.

Why do we believe this is the GT Performance? Well, it's pretty obvious: it bears the same orange paint color that Ford revealed it with, it has a big GT badge right in the middle of the rear hatch and the bumper has an integrated faux diffuser that most likely serves no aerodynamic purpose; it’s most likely there just to lend the Mach-E a sportier, more racing-inspired look.

We wonder if this rear bumper design is final, though. It looks a bit weird all painted in the body color, and we suspect that the final version will have it in satin black.

As a reminder, the top of the range Mach-E GT Performance model will have 480 horsepower, 634 pound-feet of torque, an 88 kWh battery pack (with a promised 235-mile EPA range), and a sprint time from nought to sixty of around 3.5 seconds. You’ll be able to tell it apart from lesser Mach-Es through its unique front fascia (dominated by a ‘carbonized gray grille’), special 20-inch machine-faced wheels and the rear bumper with the integrated diffuser.

The interior will feature sporty touches too, like racing-inspired bucket seats, a unique look to the digital gauge cluster, as well as Performance Gray ActiveX upholstery with unique metallic stitching. 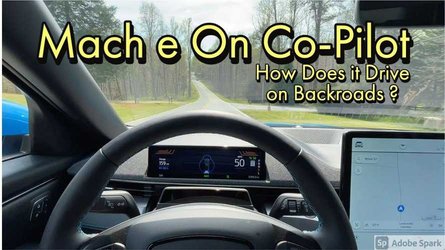 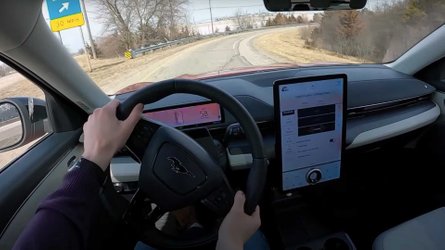 Go For A POV Drive In The Ford Mustang Mach-E