All indications suggest Autopilot wasn't engaged, and the driver has been charged with a felony.

Last week, in the middle of the night on Thursday, March 11, a Tesla vehicle proceeded through a Detroit intersection – reportedly ignoring a red light – and crashed into a semi-truck. The white Tesla crashed at 3:20 AM and ended up stuck underneath the large tractor-trailer, which dragged the car a considerable distance before stopping.

Editor's Update: Detroit Police Department Assistant Chief David LeValley told local 4 news, “It appears that speed was a major factor in the collision. All the indications that we have at this point are that the vehicle was not in autopilot mode, that the driver was in control of the vehicle at the time of the crash."

The driver has been charged with reckless driving causing serious injury, which is a felony. He was also charged for driving on a suspended license. An online fundraiser has been started to help the 21-year-old female passenger, who's in critical condition.

LeValley added, “We believe that once we look at that black box and download that information along with the information that is on the SD card, we’ll be able to determine for sure whether or not the vehicle was in auto pilot mode or not.”

Fortunately, both occupants survived, though the passenger is said to be in the hospital in critical condition. The driver was also hospitalized, but no details related to his condition had been revealed at the time of writing.

This isn't the first time a Tesla vehicle drove under a semi-truck. Several years ago, two different Tesla owners passed away after their Teslas (on Autopilot) drove into and/or under moving semis on highways in Florida. However, in this case, there is not yet any word on whether or not the Autopilot semi-autonomous driving system was engaged during the Detroit crash.

According to the National Highway Traffic Safety Administration (NHTSA), it's aware of the Detroit Tesla crash, and it has launched a Special Crash Investigation team to gather details in search of the cause of the crash. After seeing images of the crash, and what's left of the Tesla, it's surprising that the occupants survived. We can only hope the injured passenger, a 21-year-old woman, recovers.

The NHTSA has opened investigations at least 14 times into Tesla vehicle crashes. It's working to figure out if the Autopilot system is responsible for this recent crash, as well as others. Thus far, Autopilot has been found responsible for three fatal crashes in the U.S. since 2016.

Tesla continuously reminds drivers to keep their hands on the wheel and remain alert and ready to take control when using Autopilot. The automaker is currently using Tesla owners as beta testers of its reportedly more advanced Full Self-Driving (FSD) system. The company says there have been no accidents while testing FSD Beta.

According to Automotive News, Tesla didn't immediately respond to request for comments about the crash.

This is a developing story. 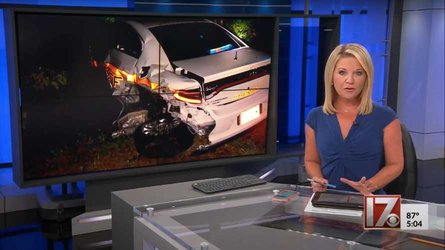