To be in the room when Sandy Munro sits down for a talk with Elon Musk is an EV geek’s dream.

Posted on EVANNEX on February 15, 2021 by Charles Morris

Sandy Munro has become an expert on the technical details of Teslas—the innovative components that most of us will never see, but that make these trend-setting EVs such delightful and disruptive vehicles. He’s also become an unlikely internet star, thanks to his insightful comments and his folksy, engaging speaking style. To be in the room when Sandy sits down for a talk with Elon Musk is an EV geek’s dream.

In this new video on the Munro Live channel, the two automotive superstars do not disappoint—they cover a wide range of topics, with detailed discussions of some of Tesla’s upcoming game-changing technologies, including megacastings, structural battery packs and much more.

Elon generated a tsunami of headlines (and a brief plunge in the TSLA stock price) with a comment from early in this interview—Sandy asked him why his Tesla had several quality-control issues, while other specimens he had seen were flawless. Elon’s answer was something that every tech customer knows, but that no ordinary CEO would ever admit: when a product first comes out, it’s going to have problems, so savvy consumers wait until production is ramped up before buying.

“My friends ask me, ‘When should I buy a Tesla?’ and I say, either buy it right at the beginning, or when the production reaches a steady state, but during that production ramp, it’s super-hard to be in vertical climb mode and get everything right on the little details...so if you really want things to be dialed...very early cars or once production has leveled off—that’s when it’s going to be best.”

Technically minded Car Guys may not think about seats much, but for some car buyers the comfort of the seats is very important indeed. Tesla is believed to be just about the only carmaker that makes its own seats.

Sandy, a gentleman of a certain age, noted how much more comfortable Tesla’s seats are than those in his Jeep. Elon explained that this is the result of “a long journey and a lot of effort”—early Model S seats were so uncomfortable that he dubbed them “stone toadstools,” but thanks to Tesla’s hands-on attention, they developed into what Sandy calls the best seats on the planet. This is illustrative of a larger issue—things like seats, that people actually touch, are critical, and they should be made in-house, says Sandy.

Sandy talked about his recent ride-along with John Stringer, head of Tesla Owners Silicon Valley, to check out the new FSD package, and his praise was effusive in the extreme. “This will save more lives than seat belts and airbags,” said he. “Absolutely stunning.”

Above: John Stringer takes Sandy Munro for a ride in his Tesla in order to experience the new FSD package (YouTube: Tesla Owners Silicon Valley)

Another fascinating topic: Tesla’s new megacastings, which many are calling a major breakthrough in automotive manufacturing. Musk tells us that replacing the rear underbody assembly on Model Y with a single casting allowed Tesla to eliminate 300 robots and reduce the required body shop space by 30 percent. When the front casting is implemented, it’s expected to save another 300 robots and another 30 percent of the space in the body shop.

In his talk with Sandy, Elon draws a parallel between the convoluted corporate structure of legacy car companies and the complex hodgepodge of parts found in their vehicles. “Organizational structure errors manifest themselves in the product,” he quips.

Different types of metals and alloys have to be joined in different ways, so a complex assembly ends up with a variety of fastening technologies: rivets, spot-welds, adhesive resin, and loads of sealant to fill the gaps between pieces. The end result is what Elon has called a “Frankenstein monster” in the body shop. Single-piece casting eliminates most of this complexity.

Eventually, the underbody of a Tesla vehicle will consist of just three major components. “There’ll be a rear casting, a front casting, and then the center will be a structural [battery] pack,” Musk tells Sandy. These innovations will be introduced in the Berlin and Texas factories, where they can be incorporated into the design of the new production lines, rather than shutting down the existing Model 3/Y production lines (and Tesla’s cash flow along with it) to retool.

The structural battery pack will allow the cells to do double duty as both energy storage and structural components. “The cells today in every car are carried like a sack of potatoes,” says Elon. “They actually have negative structural value,” because they have to be isolated from vibration and shock loads. “By bonding the cells in there, the bonding foam serves as both an adhesive and a fire retardant.”

The honeycomb structure will also add a lot of stiffness. “The torsional rigidity will be much better.”

Elon and Sandy get into some highly technical discussions about the various materials used in cars, their coefficients of temperature expansion, etc. If you’re of an engineering bent, I highly recommend watching this video all the way through. Those who are more interested in the business aspects will find some choice comments about MBAs and short-sellers near the end of the interview.

Check Out More Details From Musk's Talk With Munro: 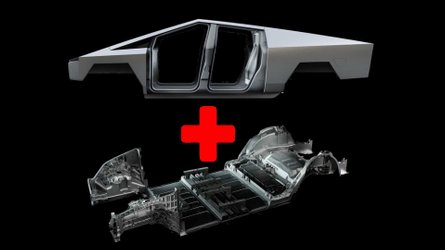 Tesla Cybertruck’s Structure Will Be Unique, According to Sandy Munro
⠀ 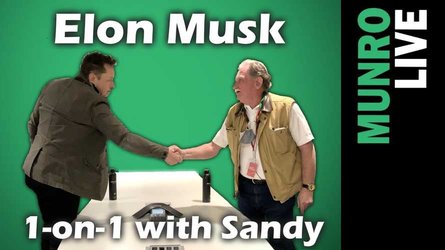