We have no idea what caused this Chevy Bolt to burn to a crisp, but fortunately, no one was hurt.

This is a developing story since all we have at this point is the above video showing a Chevrolet Bolt EV that was reportedly destroyed by a fire. The car was reportedly parked in the driveway when it caught fire for no apparent reason. The person filming the fire and the aftermath says he owns a Bolt EV as well, so he's looking for some answers.

Just like the Tesla fire story we reported this week, there is no official information on the cause of this fire. For all we know, it could have been arson. In addition, we don't get to see the car actually burning, but rather, photos of it on fire, as well as the baked electric car afterward.

We have no reason to believe that the video or story is made up. The car is clearly burned, and nothing else around it is burned. The owners of the Bolt also chimes in on the YouTube comments. He shares:

"Owner of Bolt; we only charged at home using a certified Electrician installed ChargePoint Home WiFi Enabled Electric Vehicle (EV) Charger - Level 2 240V, 32A Electric Car Charger. No problems during the 22 mos before burn out."

We can only assume the story will hit the news at some point, potentially providing us with more details. We do know that the National Highway Traffic Safety Administration (NHTSA) has opened a probe into Chevrolet Bolt EV fires.

It's not yet a recall and may never amount to that, but NHTSA's Office of Defects Investigation received two complaints stating that Bolt EVs caught fire while parked. All incidents showed a fire starting under the cars' rear seats, so perhaps an investigation will help prove whether or not this Chevy Bolt EV fire is related. Since we have little information, there's a chance this Bolt fire could be one of those already reported to NHTSA.

As you can see in the shot above, the flames are clearly under the rear seat/cargo area, but that doesn't substantiate anything. 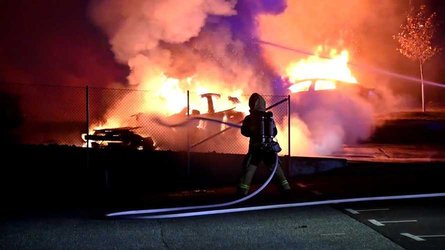 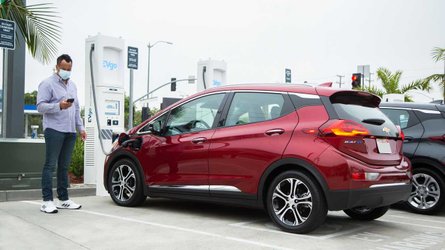 As more information becomes available, we'll update this article or share a new one. If you've had any issues with a Chevy Bolt fire, share it with us in the comment section below.

Editor's Note: YouTuber MrKistel notes that the Thumbnail image for this video that you see at the top of the page before clicking play is a composite and was created using photo-manipulating software. It is not an actual representation of the vehicle when it was on fire. However, the image directly above shows the Bolt when it was actually burning.