Off-roader on a race track? Sure!

The Tesla Model Y Performance is not exactly a track car. Sure, it has plenty of power, but it's still a crossover SUV and continues to lack the "track mode" found on its sedan-shaped sibling, the Model 3 Performance.

Add a bunch of overlanding-type mods to the equation and One Lap of a race track – in the wet, no less – becomes a very interesting preposition. Now, we've seen this spiciest version of the Model Y on this track before, and its abilities impressed. Sporting a lift kit, large off-roading tires, and a roof rack and everything changes.

With Kyle Conner behind the wheel and the car put into Sport with slip-start engaged, the Model Y begins its damp, hottish lap of the North Carolina Center for Automotive Research (NCCAR) track with the battery at a 78% state of charge. As the pedal meets the floor, the front wheels slip, but it still rockets away from the starting line.

Approaching the first turn at 90 miles per hour, Conner remarks he can feel the car "weave" a bit as he applies some brake. Despite taking it relatively easy, the car still slide around. A lot. Conner describes it as driving on "air balloons, basically." 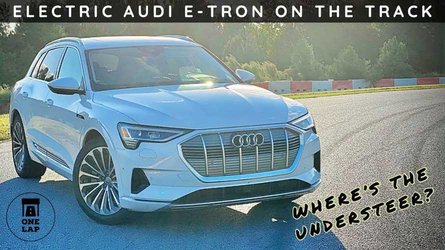 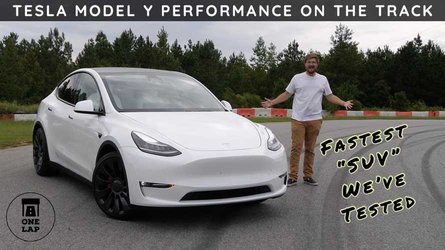 As you can see in the video above, the lap is an entertaining one, with the car understeering, then oversteering, then hydroplaning. Conner reports no top-heaviness feel despite the addition of the roof rack with a spare tire suspended over the glass roof. He notes that with the wet conditions, chances of a roll over are diminished in any case.

Hitting 106 mph as it crosses the finish line – the stock version had managed to reach 115 mph at this point in its lap – our lap-time expectations are tempered. During his recap, Conner informs us its official time is 2:02.99. Looking at the lap-time list, that puts it just behind the surprising Chevy Bolt EV and ahead of the Lexus ES330. Not bad. Not bad at all.