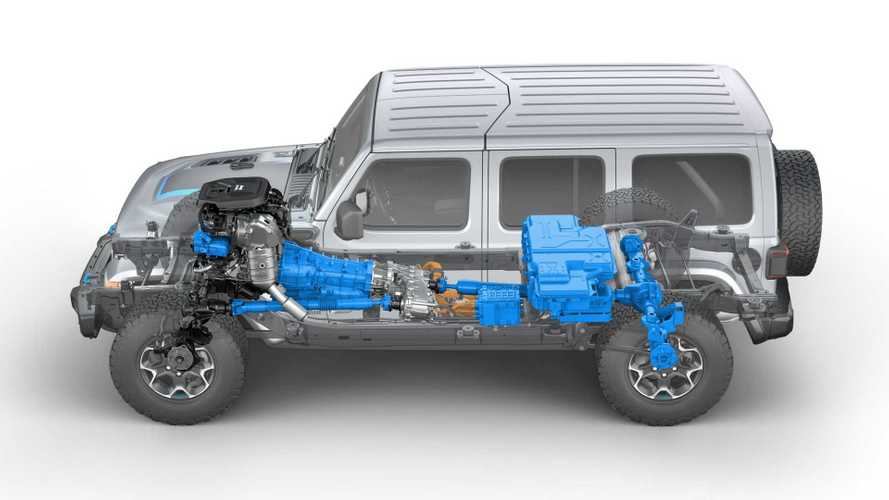 We have new information on the upcoming Wrangler plug-in hybrid and it promises a lot.

The Jeep Wrangler has been able to take you up some of the most treacherous mountain tracks ever since it was conceived, but what it’s not been able to do is get you there in silence. That’s why the upcoming plug-in hybrid version of the Wrangler is quite an enticing prospect for off-road enthusiasts.

Experiencing nature and remote places is a real treat, but were you not to have the thrum of an engine milling away in the background, it’d be even better. The launch of the Wrangler 4xe PHEV is a few months away, but until then let’s see what exactly it will offer, based on some new information published in a GreenCarReports article.

Concerning the 4xe’s powertrain, we've covered it before and there’s nothing particularly notable about it. Up front there’s a 2-liter gasoline engine that drives the wheels and acts as a generator. There’s a 134 horsepower / 181 pound-foot electric motor (P2) located on the end of the eight-speed automatic gearbox to which a shortened drive shaft is connected. The engine is also aided by a smaller belt-connected electric motor (P1) that provides an additional 44 horsepower and 39 pound-feet of torque (it’s used as part of the eTorque mild hybrid in other FCA offerings).

Peak combined power is 375 horsepower, while maximum torque comes in at 470 pound-feet (that’s more than the EcoDiesel model). By adding the electric motors in these specific places, Jeep has managed to retain the selectable 2WD, 4WD and 4WD Low modes that any Wrangler has. Electrification won’t affect the locking front and rear differentials - it will all behave and have the same functionality as a normal gas-burning Wrangler, but with a lot of extra (instant) torque.

Prototypes have been put through some 1.5-million miles of testing to ensure the safety, performance and smoothness of the system, according to the head of global propulsion Fiat Chrysler Automobiles, Micky Bly. He points out that

' We’ve tried our best to make it feel alike. In fact, when we do these off road courses, we actually have the same evaluator...he's the reference point and actually scores these vehicles for us. And he's ensuring that this thing feels equal—no head bobbing, no swaying, no lean, very controlled, not herky-jerky, coming down-grade. '

Powering the electric motors will be a 17 kWh battery pack comprised of 96 Samsung SDI lithium-ion cells. It sits just in front of the rear axle, under the rear bench and in front of it. The pure-electric range it provides is expected to hover around the 25-mile mark, which doesn’t sound like much, but it should enable the aforementioned silent off-roading that is the 4xe’s main draw (on top of the impressive torque figure); the vehicle will have an E-Drive mode which will prevent the gas engine from firing up, unless juice in the battery is running out or the vehicle is towing something up a hill.