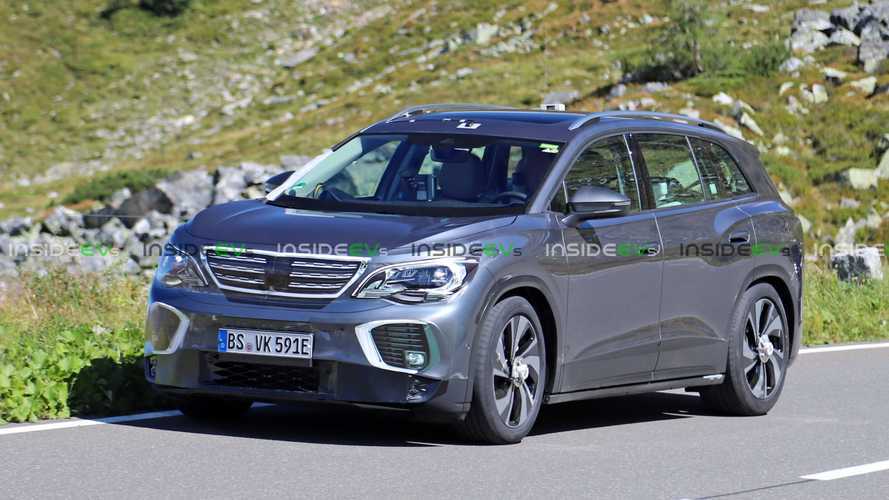 Back at the 2019 Shanghai motor show, Volkswagen took the wraps off a study it called the I.D. Roomzz concept. That vehicle was the preview for a production model called the ID.6 and this is the first batch of spy shots we have of this upcoming models.

Based on this camouflaged prototype, the ID.6 won’t differ too much from the smaller ID.4 in terms of styling, essentially being a stretched version of it (both are underpinned by the same MEB platform, so they will share powertrains and battery packs). Its key selling point will be its larger size and seating for up to seven people - it’s a three-row vehicle, whereas the ID.4 can only provide two rows of seats.

The study had rear sliding doors, but it appears that in production form these will be ditched for conventional rear doors. This is a bit of a shame given the fact that it will try to rival the Tesla Model X which has rear doors that open in a fancy and unusual way.

In terms of design, there isn’t anything to really differentiate it from the smaller ID.4 - it just looks like a slightly longer version of that vehicle, because, well, that’s exactly what it is. There may be some subtle differences on the front and rear fascias, but they will certainly look a lot alike.

Check out the ID. Roomzz

And since it was revealed as a concept in China, it’s pretty clear that VW is aiming it at that market. In fact, it is expected to be locally manufactured as of 2021 or 2022, although it may reach Europe and other markets at some point after it debuts in China; it is unclear whether it will be exported out of China to other markets of if it will be manufactured in several locations.