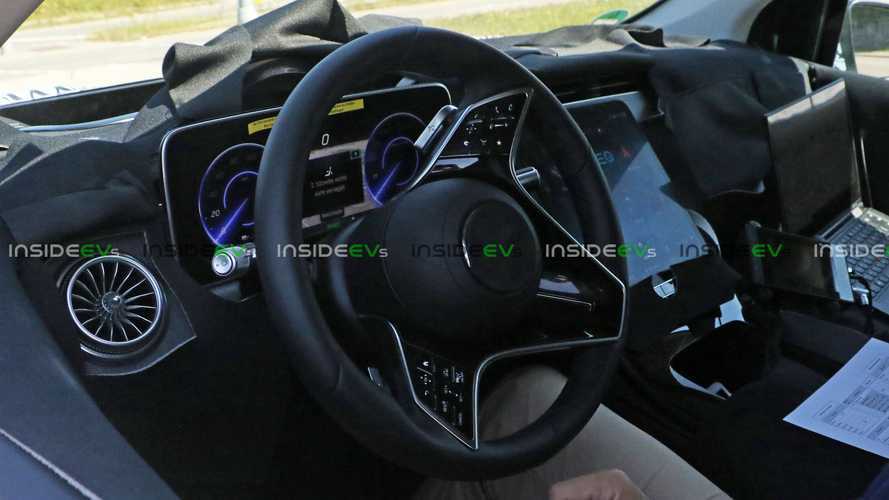 It’s going to have a fully digital gauge cluster, as well as a big screen that does away with almost all central console buttons.

It was only a few days ago that we posted the first batch of photos showing what we are pretty sure is a prototype for the next generation Mercedes-Benz EQC. We noted how it had different proportions compared to the model it’s bound to replace, as well as the fact that it will ride on a new platform that will allow for better packaging and more space for passengers.

What we hadn’t seen, though, was its interior, but now we have thanks to a new batch of photos showing a different camouflaged prototype (they have different number plates). However, it looks like it’s the exact same model and unlike with the previous set of shots, this time we get a very good look at the car’s (mostly uncovered) dashboard.

This is what we think of the current EQC

Mercedes-Benz has been offering a twin-screen setup for a few years now, but that paired two 12.3-inch displays placed at the same height; one in front of the driver, the other atop the center stack. This prototype, though, has a different layout - it still has a big (and possibly curved) screen in front of the driver, but the central screen style and position is very different.

It is a 12.8-inch screen that handles infotainment, climate settings and all other options that the driver has access to. This setup appears to have been lifted straight out of the new S-Class and if this is so, then it means it packs quite a lot of new features too.

Firstly, all screens will feature OLED technology which has better contrast, as well as more vivi colors, and it also uses around 30 percent less energy. As with the current setup, the driver will be able to cycle through several different styles of gauges and these will be complimented by a head-up display.

Well, actually two different head-up displays: one will be a conventional one like what is currently already on the market, while the second, more advanced HUD will span a much larger surface area of the windscreen and feature augmented reality (AR) tech. The final detail revealed in this fresh batch of photos is that even though Mercedes opted not to give the current EQC turbine-style air vents inside, these will make a comeback for the next-gen model.