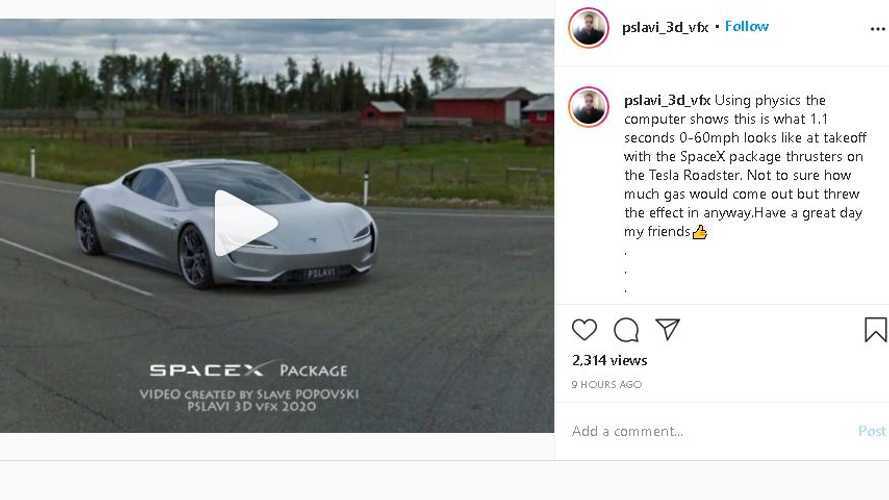 A few years ago, Tesla CEO Elon Musk said the upcoming all-new Tesla Roadster will offer a SpaceX package that includes rocket thrusters for quicker acceleration. He also said it might fly, which is clearly not the case.

More recently, Musk made an appearance on Jay Leno's Garage. While the episode focused on the Cybertruck, the whole Tesla lineup was present, including the upcoming Roadster. Musk mentioned yet again that the thrusters would be a thing. However, he explained that they will use compressed air from behind the rear license plate, which will automatically flip up when the feature is engaged.

If Tesla were to pull this off, the Roadster could potentially accelerate to 60 mph in about one second. While it's likely almost impossible for this to happen, it's definitely neat to see what it might look like.

Can The Tesla Roadster Really Have Rocket Thrusters? How Will They Work?
⠀

Tesla Cybertruck Racing Game Teaser: Should We Build It?

CGI artist and Aircraft Avionics Engineer Slave Popovski used computer software to work out the physic and render the Roadster pulling off a 1.1-second zero-to-60-mph sprint.

As soon as we see anything about the Tesla Roadster with rocket thrusters we wonder, will it ever really come to be? Sure, it's possible, and Musk continues to say it will be a reality, but it's not uncommon for his Musk's visions to adapt over time. Not to mention any regulatory challenges.

What do you think? Will there ever be a Tesla with rocket thrusters? If so, will it really be able to hit 60 mph in one second?