Netherlands: Plug-In Electric Car Sales In April 2020 Down, But Only 14%

The lockdown slightly slowed down the Dutch plug-in car market, but no drama so far.

In April 2020, passenger car registrations in the Netherlands were 53% lower than a year ago, due to the COVID-19 lockdown.

Plug-in electric car sales also decreased, but not as much, as the number of registrations amounted to 2,139 (down 14% year-over-year). The market share remained high - about 14% (including 10% for all-electric cars).

Last month, the top-selling model in the Netherlands was the Kia Niro EV with 364 registrations, although during the lockdown, logistics play a big role so it's impossible to tell which models are in the highest demand.

Relatively decent numbers were noted also by the Volkswagen e-Golf (200), Tesla Model 3 (191) and Hyundai Kona Electric (180), while the fifth-best was the all-new Ford Kuga PHEV (Escape PHEV in the U.S.) with 106 units.

It seems also that the PSA Group is finally running out of Opel Ampera-e (the European version of the Chevrolet Bolt EV), but it's still fourth best for the year. 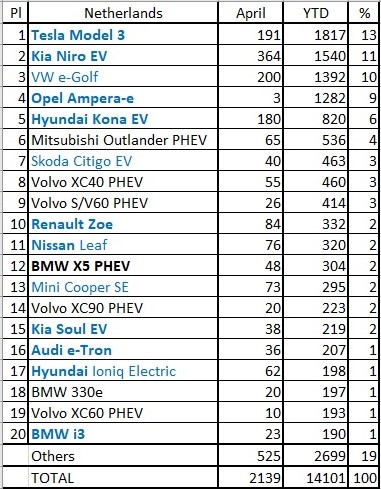