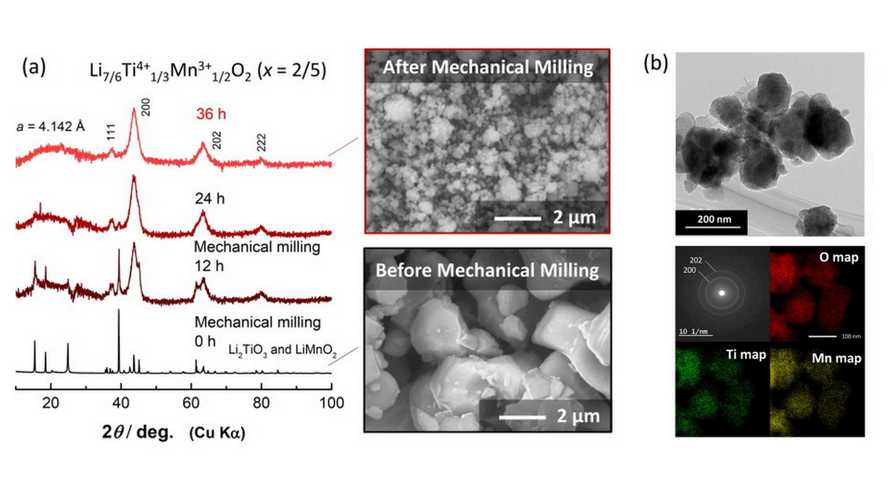 Many scientists pursue better batteries with new chemistries, such as lithium-sulfur. Or new structures, such as solid-state batteries. What few may have thought about is that building technics could help not only improve efficiency but also replace cobalt and nickel in electrodes. This is the discovery Yokohama National University researchers made with an apparently simple procedure: milling.

The study was led by Professor Naoaki Yabuuchi and published at Materials Today. It improved previous findings that showed input-output of electrons and lithium ions was much favored by their combination with manganese, titanium, and oxygen ions.

The issue is the exchange speed proved to be too slow for battery applications in real life. The Japanese researchers decided to ask why that was the case and realized the particle’s size could be one of the reasons. With that in mind, they milled the titanium and manganese particles to nano-scales with a mechanical process.

Electrodes made with these nano-sized particles managed to present a more robust exchange of electrons and lithium ions. That helped the battery to hold and disperse more charge with no negative impacts on cells’ longevity.

Yabuuchi celebrated the fact that the study will help to bring the price of current lithium-ion batteries down as soon as he and his team manage to perfect the electrode reversibility by eliminating cobalt and nickel.

"Both titanium and manganese are abundant elements, meaning we can make cost-effective, without nickel and cobalt ions used for current electric vehicles, and high-performance electrode materials with them."

If the research proves that it is possible to replace cobalt and nickel efficiently from batteries, that can be crucial to achieving the $100/kWh magic number or even lower prices than that. As you will remember, that is regarded as the point in which electric cars have price parity with combustion-engined vehicles.

If titanium and manganese really do the trick, that may reduce the pressure to control raw materials supply for batteries Benchmark Mineral Intelligence talked about. Anyway, we hope the recycling efforts Duesenfeld presented are still recognized as necessary and welcome.