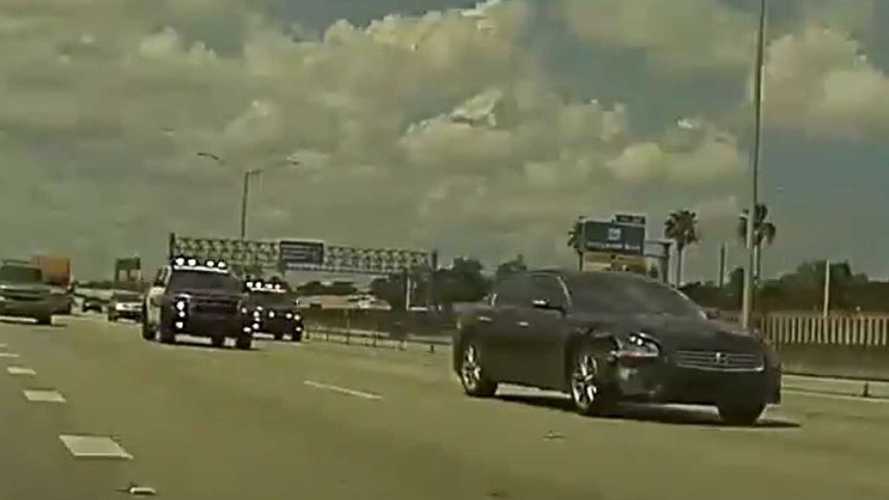 The police eventually caught up to the speeding Nissan, but we're surprised to find out who else was inside the car.

This TeslaCam video captures a high-speed police pursuit in action. Watch as the police cruisers fly by in pursuit of a car that's attempting to flee at high speeds.

Though the YouTube video provides us with no details as to why the car is fleeing, who's within or why it's being chased down by so many police cruisers, a bit of digging uncovered the story here.

Okay, let's turn our attention back to the chase scene in the video. News reports say that a woman who was wanted for a string of robberies was behind the wheel of the Nissan Maxima seen in this video.

The pursuit took place in Broward County, in the Miami-Dade area of Florida. Police were able to catch the Nissan and stop the car with a tactical maneuver. the Nissan crashed following this maneuver on the southbound lane of Interstate 95 near 151st Street.

What we're shocked by though is the fact that a child was within the Nissan. Did the police officers know this? If so, is a tactical stoppage maneuver acceptable? The local news reports:

Officers were seen removing a child from the backseat of the car following the crash.

The female driver of the Nissan was arrested on the scene and charged with robbery, fleeing and eluding authorities and child endangerment.

Fortunately, it seems nobody was injured but we just can't comprehend why one would flee and put the life of a child at risk like this. Let's hope the driver of the Nissan spends a good long time behind bars so that she learns a lesson.

This video is about Caught on TeslaCam I-95 Chase