Does The Tesla Model Y Rear Bumper Comply With FMVSS 581? Do Any Cars? 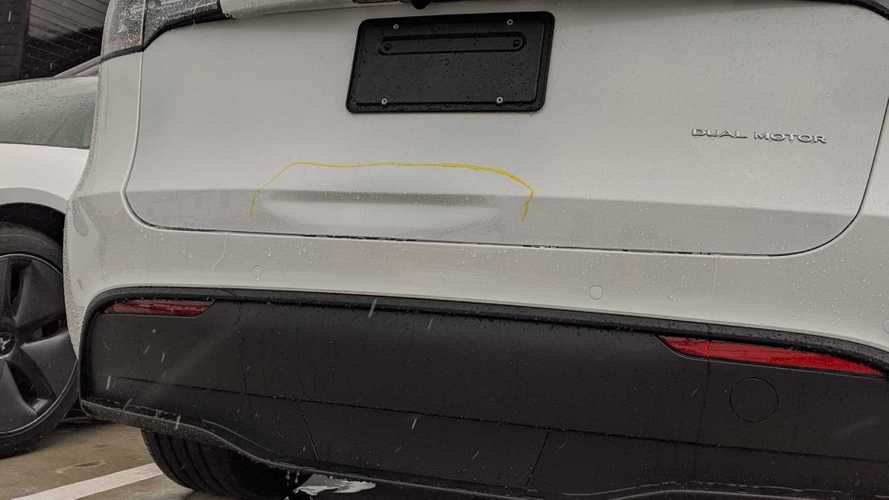 After a reader’s suggestion, our investigation pointed to a worrying situation.

Our articles often find the attention of very qualified readers. And for that, we are grateful. You may remember that with our posts about the Tesla Model Y castings, we received fantastic clarifications from the very people that visit InsideEVs. A new case, also surrounding the Model Y, proved that our readers continue to be very helpful. This time, it is related to the possible design flaw that makes the rear hatch more exposed to damage.

Lloyd Marcum reminded us of an essential component in all this discussion: Federal Motor Vehicle Safety Standard, also known as FMVSS. There is one specific to bumpers. It came to existence as 215, back on April 9, 1971, and became the current FMVSS 581.

Marcum gave us a lesson on these standards and mentioned this:

“When bumper standards were first initiated and then revised, the standard became that it had to withstand a 2.5 mph flat collision without damage to the sheet metal. I doubt that the Model Y rear bumper can meet that challenge and will need to be revised. Someone needs to test compliance with these standards.”

Who evaluates that? That was what we tried to discover besides whether or not the most affordable Tesla SUV passed these tests.

More than talking about the Model Y design flaw, this article shows many more vehicles may have similar issues, and nobody will ever tell you that because, well, that is basically up to the manufacturers to do so.

The official government agency in charge of that is NHTSA, the National Highway Traffic Safety Administration. To be even more precise, that's OVSC's (Office of Vehicle Safety Compliance) business. Its mission is described in this link and below:

It could be reassuring if that were effective, but NHTSA itself tells us more about said tests:

"Is there a need for DOT Approval?

Can NHTSA tell whether my vehicle is conforming?

According to this statement, the manufacturers are in charge of the tests. They do not even have to submit these tests to NHTSA, just put a sticker on the car saying it complies with all FMVSS. How does it enforce certification regulations without checking if they are respected or not? Without proper tests?

Joseph Young, director of media relations at IIHS, told us more about this situation:

“The OEMs are largely left to self-certify that a vehicle meets FMVSS. If it were to come out that something didn’t comply, it could lead to a recall.”

A recent example of vehicles that did not comply with FMVSS involved FCA. The list includes the Jeep Gladiator, Cherokee, Grand Cherokee, Wrangler, and Renegade, the Ram 1500, 2500, and 3500, the Dodge Durango, and Challenger and the Chrysler Pacifica.

We wonder how it came out that they did not conform to the standards. Or if they had the sticker saying they were okay with that respective FMVSS. Again, how can OVSC enforce FMVSSs without tests and any sort of financial punishment, such as a fine? Is the recall enough for a company never to oversee an FMVSS again?

If only IIHS could make these bumper tests to verify if the FMVSS 581 is respected...

“IIHS doesn’t test vehicle bumpers specifically in regards to FMVSS 581, but we have tested bumpers in the past extensively to assess their damageability. These low-speed bumper tests have found that different bumpers resulted in a large range of repair costs. As with our other consumer ratings crashworthiness evaluations, our goal was to publicize these results to encourage automakers to improve their designs and install bumpers that would actually prevent damage in low-speed crashes.”

Young was kind enough to send us a copy of its newsletter called "Status Report." It has one of the institute's last tests with bumpers.

“Notably, the 1981 Ford Escort, which had to comply with the stringent 1976 standards (which were rolled back in 1982), remains one of the best cars ever tested.”

It was an irony to have a Ford as an example. A little earlier, we had noticed by the main picture in an article from Bloomberg that the latest Ford Fusion could also disrespect these bumper standards. Check the image below to understand what we mean.

Just like the Model Y, the Fusion has a trunk lid that integrates into the rear bumper. That could mean any crash there could damage the sheet metal. But does it? We have searched for complaints and cases and found nothing so far.

Luckily, what we did find was that NHTSA does random tests to check compliance, even if not as many as necessary. They are gathered at the NHTSA Compliance Database. We have looked for the Model Y compliance with FMVSS 581, but, as a 2021 vehicle, it is not included there. In fact, the database only has model years up to 2019.

In that case, the Fusion would probably be there, right? It isn't. In the list of FMVSS, 581 is not even available. We contacted NHTSA to find out why. We have also contacted Ford and GM to learn respectively about the Fusion and Trailblazer compliance tests regarding the FMVSS 581. If you remember, we suspected that the new compact SUV from Chevrolet might have the same issue the Model Y seems to have.

If Tesla ever made that test with the Model Y, we would be more than happy to show a video or pictures of it in a new article. The problem is that the company does not talk to the press, so it will probably publish such tests in its blog or on Twitter. Again, if it has ever performed them, mind you.

If you are familiar with FMVSS 581 tests in manufacturers, please let us know more about them. What started with the Model Y may prove to be a much broader issue than we could imagine. Sadly, you are probably the one paying the bill for these design flaws, regardless of driving an EV or not.