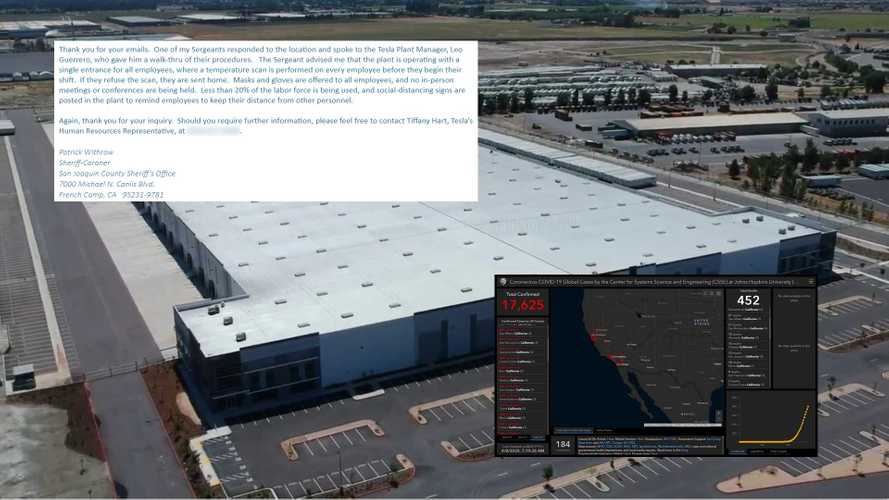 At the same time, another alleged employee says Tesla demands them to go to work.

If you are following our articles on the Tesla Lathrop operations, you already know alleged and confirmed employees at that facility claim the company is not taking proper steps to avoid COVID-19 infection. The last we heard about that was that the San Joaquin Sheriff visited Tesla Lathrop and would take measures about that. We were waiting for an official answer from him, and it is finally here.

Patrick Withrow clarified he was not personally there to inspect the facility, as Harlan Worker told us on April 3. He sent one of his sergeants there. Here is his official reply to our request for comment:

“One of my Sergeants responded to the location and spoke to the Tesla Plant Manager, Leo Guerrero, who gave him a walk-thru of their procedures. The Sergeant advised me that the plant is operating with a single entrance for all employees, where a temperature scan is performed on every employee before they begin their shift.  If they refuse the scan, they are sent home. Masks and gloves are offered to all employees, and no in-person meetings or conferences are being held. Less than 20 percent of the labor force is being used, and social-distancing signs are posted in the plant to remind employees to keep their distance from other personnel.”

Withrow also gave us the phone number of Tiffany Hart, Tesla's Human Resources Representative, so that we could call her to check the information. We have tried to contact the company through its PR department back on April 4 and received no answer whatsoever.

We don't know who this sergeant was, but he reported something very different from what Harlan Worker, Lathrop2, and Tesla GDC Employee told us. Summing up, they say they were not given masks when they asked for them, temperature check is not accurate, people still gather to eat, and everyone is still working apart from some office employees.

They are now joined by Lathrop4, who sent us the message below:

“I read your article a few days ago and wanted to see if the San Joaquin County Sheriff’s office has verified if the Harlan facility is closed?

I was contacted by the HR department on Friday after making it very clear several times that I was afraid to return to work. They stated I needed to return to my normal schedule shift which is (...). I have a tremendous amount of fear to expose myself to the virus as much as losing my job... I agreed to return but I am having second thoughts only to fear retaliation at a more convenient time for them. They say no retaliation will occur...

I would like to remain anonymous. I just want to reassure myself that if indeed they were ordered to shut down, I can have this for my records in case my situation goes south.

Thank you in advance for your help during this difficult time.”

As you can see, this alleged employee accuses Tesla of pressuring its employees to go to work. That contradicts the company's allegation that it is allowing them to decide whether to be there or to stay at home and respect the lockdown orders.

We named this employee Lathrop4 because of Lathrop3, who got in touch with us before Lathrop4. This person also clarified a little more what Lathrop's business is.

“It’s a distribution center. We make the parts there and send them to Fremont to get put on the cars but Fremont is closed so we are distributing nothing right now, only making parts and storing them. That’s why I don’t understand why they would put us at risk like this. I know you want to stay ahead but at the risk of your workers, though?”

The production focus is currently on a single vehicle.

“We manufacture Model S, Model X, and Model Y parts there. They shut down the S and X part production. Now, they are just running Y and they gave us nothing for coronavirus. They just said: ‘Don’t touch each other.’ They don’t care about masks or six-feet rules: they only care about numbers, not lives. As far as I know, they are still doing rideshare. They have said nothing about stopping it. I appreciate you being confidential with this because I don’t want to lose my job for telling the truth.”

Local authorities are convinced everything is ok. These employees fear for their lives. Who's right? We have no idea. If you work at Lathrop and would like to say something about the situation there, we're still waiting to present the most precise assessment of the situation. Including the official response from Tesla that never comes.