This Tesla Model 3 Towing Video Might Make You Cringe

After our recent discussion about towing EVs, is this method ok?

We still have the discussion about towing EVs fresh in our minds. We published it on March 9, 2020. When some readers gave us feedback about that, we discussed it again with the AA and AAA on March 17. Was it a coincidence that Ray Snyder posted this video at the Tesla Model 3 Facebook group? The tow truck driver must not have read InsideEVs lately.

Knowing the risk involved in flat towing an EV, our immediate reaction was to cringe from the footage. After watching it three or four times, we started hoping that this beautiful silver Model 3 is a rear-wheel-drive unit. Why don’t you make them in silver anymore, Tesla? Paint problems?

Did It Make Sense To Write About Rescuing And Towing EVs?

Greg Carter, the technical specialist at AA, told us some EVs could be towed at 30 mph for short distances. As we said, only to take them away from dangerous spots. This does not seem to be the case with this Model 3.

The video was made at the John J. Montgomery Freeway, in Chula Vista, California, also known as Interstate 5. The speed limit there is 55 mph, and the tow truck must be at least at 50 mph. We’d bet it is even faster. 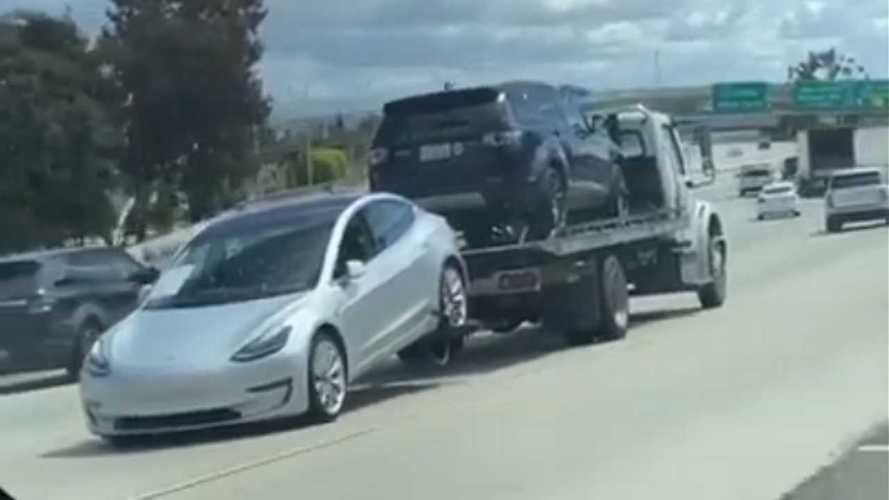 Considering it is in the middle lane, we also believe it was not on a short distance trip. That Tesla was probably going much further than Carter would recommend it to be flat towed, even if it is really a RWD version of the Model 3.

Tesla does not have any express prohibition for what Snyder filmed in the Model 3’s manual. It just mentions the “rear motor generates power when the wheels spin” and nothing else. There is no image of flat towing with the front wheels on the ground, for example. Does that imply it is not forbidden to do it this way, or were we right to cringe in the first place? Give us your impressions of this in the comments below.