Interview: Starman And Eli Burton Team Up To Fight For Tesla 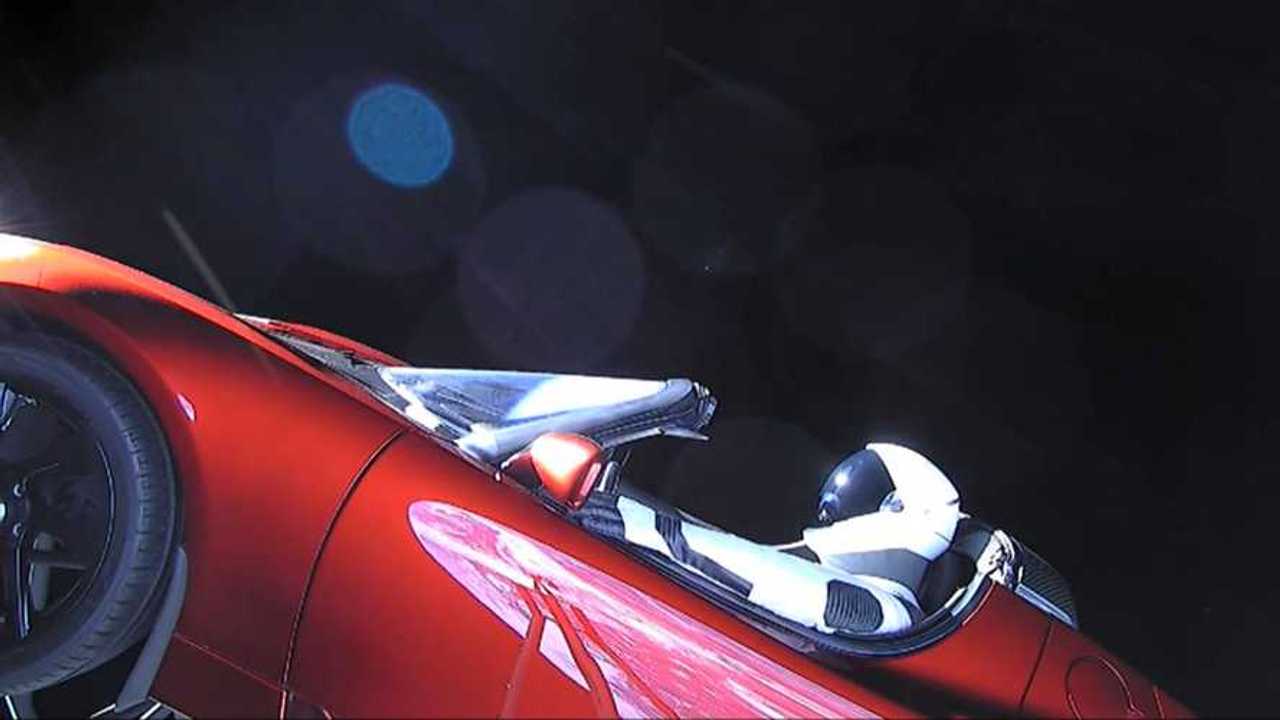 Advancing the cause of clean energy and transportation is a noble effort.

Join Us At EVs And Tea: The Largest EV Event On The East Coast
⠀

Fully Charged LIVE: How Will Tesla Still Win With No More Tax Credit?
⠀

By day, he’s a mild-mannered company director in the software industry. But when duty calls, he suits up and uses his powers to advance the cause of clean energy and transportation, foiling the nefarious schemes of fossil-fueled evildoers.

Above: Starman stands guard to protect Tesla and he's fully-equipped with his Boring Company 'Not-a-Flamethrower' (Photo courtesy of Eli Burton)

He’s Eli Burton, one of Tesla’s most active unofficial ambassadors. He’s not only brought to life the Starman superhero character who shows up to inspire the faithful at Tesla and SpaceX events. He’s also the creator of the graphic novel The Adventures of Starman, President of a Tesla Owners Club called My Tesla Adventure, co-host (with Anuarbek Imanbaev) of the weekly Tesla Geeks Podcast, and weekly guest on Alex Guberman's E for Electric YouTube channel. Eli is one of the go-to guys that journalists call when they need someone to comment on the latest Tesla news - he recently appeared on CNBC to talk about the Cybertruck. He also spends a lot of time “engaging Tesla owners and non-owners, answering questions for prospective buyers.”

As you can imagine, it wasn’t easy to track down this peripatetic do-gooder. When I did, there were a couple of things I was surprised to learn. For one, Eli was never really a comic fan - before he created the Starman comic, his main experience of fictional superheroes was through recent movies. However, “for the story I wanted to tell, a comic was the perfect medium.”

Above: Eli Burton with his Model S parked alongside its new pal, the Tesla Semi Truck (Photo courtesy of Eli Burton)

Like many of us, Eli watched the 2018 launch of the SpaceX Falcon Heavy, which sent Elon Musk’s personal Roadster on a Mars-bound trajectory, in fascination. Inspiration hit like a bolt of cosmic rays: all Starman was missing was his own comic book universe. “Within 24 hours I’d hired the artists,” Eli told me. “I’d never done a comic before. I started with a budget of $10,000, but it went way over budget. By the time it went live, my credit cards were maxed out. For the first couple months, revenue from sales just covered interest.” The $10k budget turned into $50k.

Eli created a superhero universe around Starman. The latest issue, Big Oil Strikes Back, which was written by William Frost and illustrated by Ronald Acosta, is based on a cinematic approach, so it also serves as a storyboard for film - an animated version is planned for the future.

Above: A look at the new issue of the Adventures in Starman comic book series, Big Oil Strikes Back (Photo: EVANNEX by Casey Murphy)

The process of creating the comic inspired Eli to bring the Starman character to life. “He needed to be a movement - he needed to return in real life. I had no idea what the response was going to be like - I first wore the suit at a Tesla Owners Club conference, at a tour of the Fremont factory, and people’s response was electric - it was like seeing the kid come out in everyone. It’s turned out to be bigger than I ever expected it to be.”

Needless to say, GM, Ford and other legacy automakers don’t have anything like Starman, and if they did, it would be seen as a promotional ploy, says Eli. “Part of the reason for the impact [of Starman] is that everyone knows Elon’s genuine commitment to the mission. It’s not just a marketing stunt.”

Above: The official trailer for the latest issue in the Adventures of Starman comic book series, Big Oil Strikes Back (YouTube: My Tesla Adventure)

The Adventures of Starman is of course based on real events, and it includes many real-life details. For example, the character Paul, who appears in episode #2, is a real person, and the conversation he has with Elon Musk during the Model 3 ramp-up actually took place. Each issue references a real tweet from Elon Musk.

The Iron Man’s arm’s-length relationship with the media is well known, so I wasn’t surprised to learn that Starman has never personally met Elon. However, he has talked to Tesla Senior Design Executive Franz von Holzhausen a number of times. While he was working on the second issue of Starman, he met von Holzhausen at the Model Y launch event, and got his input. “Make me a dynamic designer!” said Franz.

Eli is a fairly recent convert to The Tesla Way. He first became interested in Elon Musk after reading Ashlee Vance’s excellent 2015 biography. “It’s clear that this guy is intent on changing the world, and he’s actually going to do it,” thought Eli. However, as it has for so many of us, The Moment came when Eli test-drove a Tesla. “It was love from the first press of the pedal,” he told me. “What really got me was Autopilot. It was like alien tech from the future - nobody had anything like that at the time. From the moment I activated AP for the first time, that’s when I thought, ‘the future is finally here.’”

“Most things don’t live up to expectations, but Tesla does,” Eli continued. “Two and a half years into owning one, I’m still impressed every day.”

As I’ve written more than once in this column, most of the mainstream media, and financial writers in particular, still don’t understand Tesla - they continue to think of it as an automaker that’s trying to compete with the Toyotas and Volkswagens of the world. “Analysts have done a horrible job understanding Tesla,” agrees Eli . “Jim Cramer hit them over the head with the fact that it’s a tech company.”

Eli believes that before long, Tesla will take its place in the pantheon of big tech. “It’s on a five-to-ten-year course to become a trillion-dollar company. It’s going to be a result of Tesla’s software platform, battery supply, and autonomy.” Tesla will be the first to deploy a commercially viable fleet of self-driving cars, and this will bring in “a tidal wave of revenue.” The company will not become an actual monopoly, because it will never be able to produce enough cars on its own to meet global demand, but “they will own a very large segment of the auto industry, and they will be the largest-cap auto brand for at least a decade. They’re well on track to surpass Toyota within the next couple years.” He adds, “We’re much closer to the tipping point [for EVs] than people think.”

Eli shares my view that the auto industry will face a shakeout soon, and that some of today’s famous brands may not survive. The giant Toyota seems unlikely to be one of the ones that goes under, but the pioneer-turned-naysayer has made itself increasingly unpopular with its support for Trump’s war on emissions standards, and its relentless promotion of hydrogen “fool cells” and “self-charging hybrids” (aka perpetual motion machines). “It drives me insane,” says Eli.

Considering the massive media coverage of Tesla, is there any topic that’s not getting the attention it deserves? Eli thinks the upcoming Maximum Plaid powertrain, which Musk has referred to as “alien technology,” will be a game-changer. If, as expected, Tesla also unveils new battery tech this year, the company will be “coming at it from both ends. I think it’s going to be about more than just great performance.” The new powertrain and battery tech will extend range and bring down costs. “It’s about getting the best return on watts per mile - faster, longer range and cheaper. It also impacts on charge speed. Any of the concerns about EVs [range, charging speed] will be dead. It’s just going to fuel more demand.”

Above: Starman checking out the EVANNEX Tesla Model S before heading off to the SpaceX Falcon Heavy launch (Image: EVANNEX)

Another thing that seems to be dead is the notion - the talk of the media a year or so ago - that “Tesla killers” were coming to eat into the California upstart’s market share. Instead, the opposite has happened - put in motion with positive word of mouth and improved media coverage of Tesla (thanks in large part to the selfless heroic deeds of tireless partisans such as Starman). “Just because firms sell products in the same space don’t mean they’re competing,” says Eli. “Tesla has created a market not just for EVs, but for Tesla, because they’ve made such a superior product.”

Written by: Charles Morris; Editor's Note: If you want to catch up with Eli Burton and meet Starman in-person, be sure to RSVP for the upcoming EVs and Tea event happening this Saturday in Miami (details here).