How The Tesla Cybertruck Prevails In A Zombie Apocalypse

While some hardcores may disagree, we know that there will never be a real zombie apocalypse. Most people are pretty confident that we aren't going to be attacked by aliens either. However, anything is possible, and there's no hiding that fact that any number of natural catastrophes could occur in a moment's notice. Not to mention terrible events caused by humans.

No matter how you feel about the polarizing appearance of the Tesla Cybertruck, it's definitely capable, versatile, tough, quiet, future-proof, etc. Tesla fan, owner, and YouTuber/influencer Andy Slye says you need four things for survival: "Nutrition, Supplies, Shelter, and Travel." He asserts that the Cybertruck can provide all of the above.

More For The Zombie Fans: 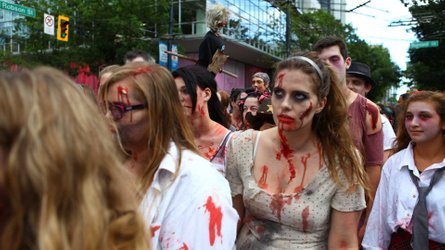 Tesla CEO Elon Musk has already joked about the Cybertruck and its "apocalypse protection," but only when prompted by a tweet from The Walking Dead:

While this may all come across as a bit weird and silly, you can never be too prepared for a catastrophic event. Tesla has already proven that its vehicles offer protection and features not found in other vehicles, and the Cybertruck takes it to a whole new level.

Check out the video above and Andy Slye's detailed description below. Then leave us a comment.

What would happen if you had a Tesla Cybertruck in a Zombie Apocalypse? Let's find out!

For hiding food & water there are numerous hidden compartments throughout the truck including storage space in both sail pillars, a hidden compartment under the truck bed, and a front trunk (frunk). We all know with any zombie apocalypse there's always those "bad humans" who have survived only because they're looking out for themselves and stealing other people's resources. As long as they haven't watched this video they'll have no idea where you hide your food and water unless they're one of the 250,000 people who have already pre-ordered a Cybertruck.

Since we're talking about storage let's talk about supplies because it's similar - you can also use the Cybertruck's storage space for not just food and water but for weapons and supplies that you need to use and hide from zombies and other human adversaries. The Cybertruck has adaptive air suspension so it can just tap into that and use it as an air compressor in case you need to air up a tire for example. And we all know how torturous it is even without zombies, to not have any power so having a truck that acts as a portable generator would be extremely valuable in a zombie apocalypse. If you're lucky you'll have the optional Tesla not-a-flamethrower flamethrower that can fry zombie heads instantly, but if you don't have that, the Cybertruck itself can be used as its own weapon where you plow right through them with the solid piece of metal.

The Cybertruck is made of a 30X stainless steel exoskeleton (same alloy that SpaceX uses for rockets). Zombies could literally run into the Cybertruck and hit it with their hands all they want or even beat it with hammers and you'll be fine. If there are any of those human traitors who are trying to shoot you and steal your food and weapons, the stainless steel exoskeleton is actually bullet proof. The glass that makes up the windows and windshield is actually called Tesla armor glass, and it's exponentially stronger than normal glass and the only zombie who can break it is the Franzombie who throws steel balls (one of the more rare zombie species). Tesla will need to improve their armor glass, but even now it's still the best zombie apocalypse glass on any consumer vehicle. During this apocalypse you'll want the maximum amount of space in your shelter, and it looks like it could be possible to fold down the center armrest to get from the cabin to the bed without having to get out of the truck. This truck may also have Tesla's Bioweapon defense mode that currently exists for their other vehicles in case you need to fend off an airborne zombie virus like in I Am Legend. If you're flying down the road at 80 miles an hour trying to get away from a flock of zombies then you'll want to be in the safest vehicle. Tesla vehicles are known to be the safest in their class.

For traveling, the Tesla Cybertruck is super quiet because it's all electric, and if you haven't driven an all electric vehicle then believe me when I tell you it's nearly silent when driving at lower speeds. And even better if you have one of the matte black Cybertrucks which Elon agreed to offer as a color, you'll be able to travel in super stealth mode without attracting attention from zombies. You might be thinking "If there's no power then how's this all electric Cybertruck going to get around?" Well with the Cybertruck, there's actually a solar power option that Elon has said will provide 15 miles of range per day or even better if the fold out solar wings come to fruition those can provide 30 to 40 miles per day. But what if your measly old Cybertruck doesn't have the solar options BUT it is the tri motor version, well then it should be able to travel 500 miles on a single charge which is one of the longest range electic vehicles available. The only negative is that people will be trying to tag along with you because you'll have this ultimate food-storing weapon-shelter on wheels and it only seats 6 people so just pick the 5 people you want to live with for the rest of your life, and you'll be fine.