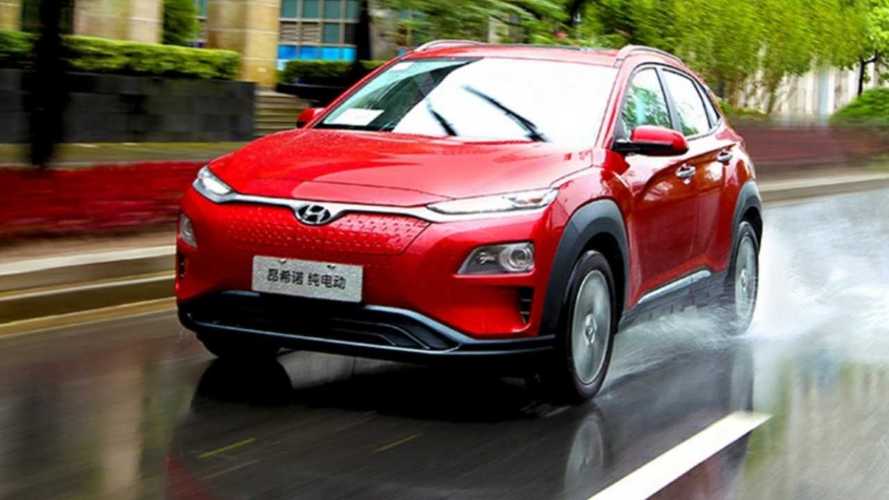 Yes, these people think that you can't drive an electric car if there's lightning.

South Korean automaker, Hyundai reached out to us with some interesting information. In a myth-busting survey, the automaker polled 2,000 licensed drivers about EVs in general. The results reveal Hyundai's "top ten EV myths."

The craziest one — and understandably the one Hyundai highlighted in its share — is that nearly one in five drivers think EVs are unsafe to operate during lightning storms. What the what!

You Should Never Drive An EV In The Rain: Ludicrous EV Myths Explored

Hyundai — maker of the Kona Electric, Ioniq Electric, and multiple plug-in hybrid electric vehicles — points out that while "Interest in green motoring continues to grow," at least in some areas, car buyers are still concerned due to a multitude of bullsugar. No, that's not a word the automaker used, but a similar one is what came to our mind as we were working this article.

Let's take a look at the crazy information Hyundai learned from respondents:

“It’s been fascinating to hear about some of the misconceptions that people still have about electric vehicles.

We’ve all been told you don’t mix electricity with water, but when it comes to EVs there’s absolutely no extra risk of driving in a lightning storm – they are just as safe as a petrol or diesel car.

Range anxiety is also an interesting one. When electric cars first came out the range was an issue we had to tackle, but these days you can get almost 300 miles on a single charge and this will increase further in time. The NEXO hydrogen fuel cell car can travel even further with a range of over 400 miles and takes less than five minutes to re-fuel with hydrogen."

On a much more positive note, however, Hyundai found that 56 percent of the 2,000 people surveyed agreed that the UK government is making the right choice by encouraging drivers to adopt alternative-fuel vehicles by 2040. Childs continued:

“It’s for us in the industry, working together with Government and electricity providers, to make sure drivers understand the reality of EV ownership.”

As stated, she agrees that automakers like Hyundai, in partnership with government entities and electricity providers, must commit to dispelling such myths. In conclusion to this valuable survey, Hyundai did just that. We've shared the information in its entirety below.

Range anxiety bringing you down?

Don’t panic. A typical electric vehicle (EV) covers between 100 and 200 miles on a single charge and even longer on some models with ranges of more than 300 miles. Hyundai’s KONA Electric can actually go as far as 279 miles with one charge.

No need to be! There are currently more than 14,500 public charging points in more than 9,000 locations in the UK[1] and the network is growing rapidly.

Think an electric vehicle is too expensive?

Think again. With more and more affordable and competitive options and fewer moving parts to fail or need replacing, EVs are in fact cheaper to run than conventionally fuelled vehicles.

Worried that electric vehicles are too sluggish?

Not true! Instant torque delivery means EVs can accelerate just as quickly and if not much quicker than their petrol or diesel counterparts. For example, Hyundai’s Kona Electric can accelerate from 0-62mph in just 7.9 seconds.

Think you can’t take an electric vehicle through the car wash or drive in a lightning storm?
Of course we’ve all been told that you don’t mix electricity with water, but when it comes to EV’s its perfectly safe to use a car wash and there’s no extra risk of driving in a lightning storm.

Not enough choice in the market?

The electric car market is expanding rapidly. In fact, Hyundai currently has the largest e-mobility fleet in the world including the latest in electric, hybrid and hydrogen fuel cell vehicles.

Worried that electric vehicles’ batteries are adding to the landfill crisis?
EV batteries can be recycled just like the batteries in petrol or diesel cars. EV power cells can be used to store solar and wind energy, or they can be broken down with their more-valuable elements reused[2].

Doubting the safety of electric vehicles?

Worried about your breakdown cover?

No reason to be. The majority of breakdown suppliers now provide services for all EVs as well as conventional vehicles.

Don’t think an electric vehicle will fuel your petrol head needs?
You won’t be disappointed. As soon as you push down on the accelerator, the transition from stationary to speed is almost instantaneous.