Probably not, but Tesla doesn't seem to even want to give it a try.

The Tesla pickup truck will venture where no other Tesla has gone before. Tesla is going straight at the most loyal vehicle buyers in the industry.

Pickup truck owners are often as loyal as car buyers come. Heated debates often center around which truck is the best: Ram, Ford F-150 or Chevy Silverado (GMC Sierra). These debates are often as hotly contested as political moves or even gun control rights/laws.

For Tesla, this is new territory. Does the electric automaker stand a chance here? Well, if you take a look at the graphic below (via Bloomberg) with data provided by IHS Markit, the answer is yes. 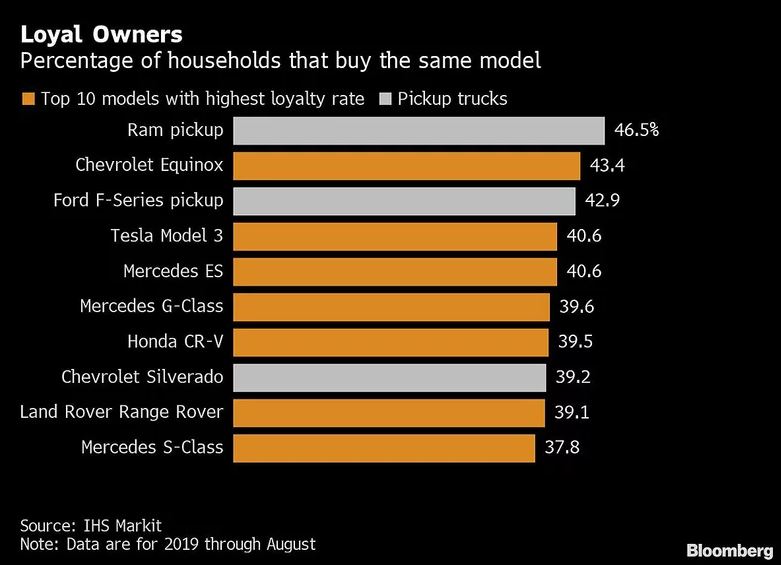 Just look at how highly placed Tesla Model 3 owners are on the list (40.6%). That positions Tesla above the Chevrolet Silverado and just slightly behind the Ford F-Series truck. The Model 3 is the highest-ranked car on the list, so there's reason to believe Tesla can sway buyers to its pickup truck and then retain those buyers at a high rate.

However, there's no reason to think Tesla is targeting conventional pickup truck owners. The polarizing design of the Tesla truck, as described by Musk, won't sway many of those truck owners. Furthermore, the production outlook for the Tesla truck is nowhere near say the Ram or F-150.

Dan Levy, an analyst at Credit Suisse, remarks on production in this statement:

“Given electrification cost constraints and customer preferences, we expect the large-truck segment will be among the last segments to see an inflection in volumes toward electrification.”

Levy says Tesla will sell around 50,000 trucks by 2025. So, it'll be a low-volume offering for Tesla and that's to be expected, given its expected appearance. Those who love it will buy it. Those who don't will look elsewhere for an electric pickup, perhaps to the Rivian R1T.

Hopefully, tonight we'll get some answers on expected production. You can watch the Tesla truck livestream right here.