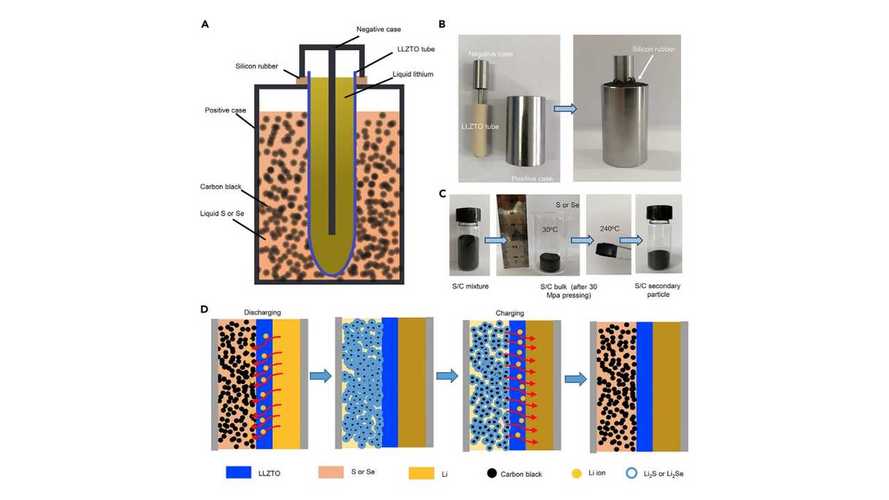 We have covered lithium-sulfur (Li-S) batteries quite often here at InsideEVs, but never one like this. These batteries use solid lithium as anodes and liquid organic electrolytes, but what if the electrolyte was solid and the lithium was liquid? That is what researchers from the Zhengzhou University, Tsinghua University, and Stanford University have proposed.

Gallery: This Li-S Battery Works With Liquid Lithium And A Solid Electrolyte

These batteries, using sulfur or selenium, avoid the growth of lithium dendrites and have high Coulombic efficiency and cycling stability, according to the researchers. All due to the way they work.

Due to the high temperatures involved, the research states these batteries could be used at concentrated and large-scale storage applications. One good example is the Hornsdale Power Reserve Tesla built and plans to expand. Were it made with these Li-S batteries, with more energy density, the expansion would probably not be necessary.

These batteries are cheap to build, have a long lifespan, and high energy density. Unfortunately, it may never be available for cars, but probably because of what you think that prevents it from being practical.

We have to remember engines reach temperatures way above those. There was also a converted electric car powered by sodium-nickel-chlorine batteries developed by the Swiss company KWO. It worked at 270ºC (518ºF), but it was vacuum-sealed, which kept temperature only at 5ºC to 10ºC higher than the ambient temperature.

The big problem of such a solution would be to keep the battery temperature that high. It would require the car only to be parked with an external source of energy so that the battery did not get damaged for cooling down. In other words, the problem would be keeping it heated, not making sure the driver did not get burned. Well, that too, but that is a concern for all cars.

In short, it would be improbable to see this solution in any production vehicle, but it is interesting to see how new battery technologies are evolving. EVANNEX has recently reported that it is going on at a much higher pace than we could imagine.