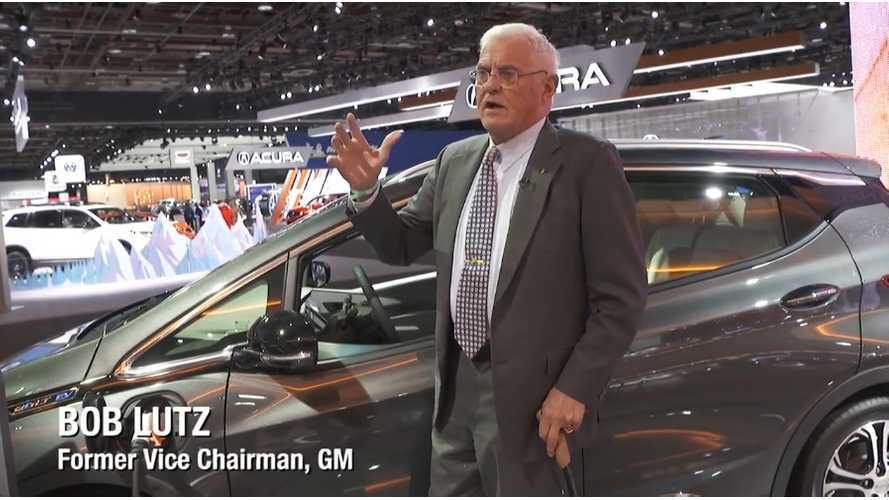 Bob Lutz said Tesla would fail at just about everything, years ago.

If Elon Musk had a master plan for Tesla, so did the auto industry's most prominent top executives. Perhaps the most notorious of the bunch (especially in Tesla lore) was GM's Bob Lutz. Much of this history dates back to the movie, Revenge of the Electric Car (you can watch it here).

Bob Lutz Unleashed On Autoline: Of Course He Talks Tesla

During that time, Lutz had retired from his post as Vice Chairman of General Motors after an illustrious career in the auto industry. Even before his retirement though, Lutz was outspoken about Tesla. After the launch of Tesla's original Roadster, the former GM executive voiced his doubts (and a trace of envy) questioning if the Silicon Valley startup could ever make it — in Revenge of the Electric Car he said:

Some believe in the Tesla announcement, 200-mile range, 0-60 in 4 point something seconds, 140 mph top speed, 6,831 laptop batteries, I basically said wait a minute, I've accepted everybody's arguments on why we can't do this, but here's this small startup company in California and they think they can get all these figures.

Above: Lutz wasn't a believer in climate change (Image: Revenge of the Electric Car)

Lutz wasn't sold on Tesla's all-electric strategy (and rhetoric) put forth by Elon Musk. But over time, Tesla was able to get its first all-electric sedan, the Model S, into production. Suddenly, the Silicon Valley automaker began its first major wave of disruption. In turn, the industry (often begrudgingly) started recognizing Tesla as a leader in the electric car arena.

In a joint interview with Elon Musk in 2011, Lutz praised the design of Tesla's Model S prototype and said he believed the car could open the window for broader market reach making the brand commercially viable. That said, Lutz and GM still didn't decide to initiate any pure EV strategy at the time.

Instead, under Lutz's direction, GM worked on the first "Tesla killer" — a part-gas, part-electric project, called the Chevy Volt (years after discontinuing the company's own EV1 electric car in 2003). Surely this would destroy the audacious plans of a brash young Elon Musk, right?

It didn't work. The Chevy Volt is now dead (discontinued in February) while Tesla continues to gobble up marketshare. Why? Lutz says that the Tesla community is like a 'cult' that worships Elon Musk. He also belly-aches that 'Tesla is going out of business' (Source: CNBC).

It turns out Lutz wasn't the only high-profile auto exec perplexed by vehicle electrification. The late Fiat Chrysler CEO Sergio Marchionne asked customers to not buy the Fiat 500e EV because the company was losing significant money on each vehicle sold, he said (via Reuters):

I hope you don’t buy it because every time I sell one it costs me $14,000, I’m honest enough to tell you that. If we just build those [electric] vehicles, we’ll be back asking... in Washington for a second bailout because we’ll be bankrupt.

Fast forward to 2019 and similar EV confusion is present in the executive ranks of other major automakers. Take the former BMW CEO Harald Krüger who recently lost his job because (among other reasons) he wasn't motivated to pursue an aggressive electric vehicle strategy, Bloomberg reports.

In any event, I'm not sure what Lutz might think if he looked at GM's website today. The home page is full of talk about electric vehicles, prominently featuring, front-and-center, the company's all-electric Chevy Bolt. While this is encouraging, GM was only able to sell 9,266 Bolts vs. 81,100 Model 3s during the first half of 2019 (Source: InsideEVs EV sales scorecard).

To put this all in perspective, Tesla Model 3 sales account for almost half of all US EV sales for the first half of 2019. At this stage of the game, Tesla's disruption is being felt industry-wide. In turn, more auto execs are beginning to acknowledge Tesla's impact.

Even Bob Lutz had to heap some praise on Tesla this summer, saying "it was impossible to find fault with the visual quality of that Model 3... [and] excellent fit and finish also requires leadership focus and will, something that Tesla clearly has." (Source: Road and Track)

Above: An analysis of Lutz and, on a larger scale, Big Auto's strategy to try to take down Tesla (YouTube: TeslaFanInsight)

Greg, from Tesla Fan Insight channel on YouTube, delivers some fascinating analysis on Bob Lutz, the auto industry, and how Tesla continues to create challenges for Big Auto. His take: if traditional automakers aren't able to embrace change quickly enough, they might face their demise in the coming decades or (perhaps) even sooner.