Porsche Is Reinventing Its Main Plant To Handle Taycan Production 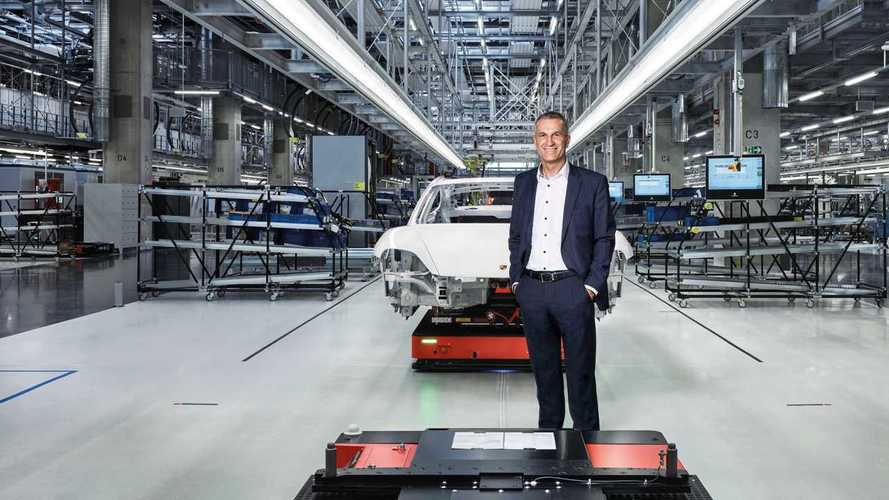 Porsche Taycan to be produced on multiple floors and in different building complexes using a flexi-line with driverless transport systems that move automatically from station to station.

The introduction of the all-electric Porsche Taycan turns out to be an unprecedented challenge for the German manufacturer.

Porsche is investing roughly €1 billion in its main production plant in Zuffenhausen, Germany, which should start making the Taycan from September of this year.

Because Zuffenhausen already produces more cars than ever, and there is not much space for a new high-volume model, Porsche was forced to design a completely new production process with the use of a flexi-line with driverless transport systems that move automatically from station to station. Particular operations are conducted on multiple floors and in different building complexes.

As we can see, not only Tesla is cramped with EV production (in Fremont).

In a new blog post, Albrecht Reimold, Member of the Porsche Executive Board—Production and Logistics, describes the project: “It’s Like Open-Heart Surgery”.

We encourage you to read the full story about this most important Porsche project:

Albrecht Reimold, Member of the Executive Board—Production and Logistics, on the Taycan and the dawn of a new era in Zuffenhausen.

Mr. Reimold, what does the launch of Porsche’s first electric sports car mean for you?

The Taycan opens a new chapter in our history. Porsche has deliberately decided to produce this iconic new car at its main site in Zuffenhausen, the heart and home of the brand. The Taycan is something very special. Its performance, range, and innovative 800-volt technology for the shortest possible charging times are one of a kind. It’s a pure-blooded sports car, yet also suitable for everyday driving—in other words, it’s a typical Porsche. More than twenty thousand people from around the world have already contacted Porsche with serious interest in buying the car—without even having seen it. That’s just overwhelming. What’s happening is light years beyond what we could have expected.

Of course. It would be a problem if we weren’t. We’ll be opening our plant in September as planned.

The Taycan is considered Porsche’s most sophisticated project ever. The company is building a completely new plant in Zuffenhausen and investing around €1 billion.

Yes, the Taycan is very important to us. You just have to look at the incredible pace of this project. We presented the Mission E study at the Frankfurt International Motor Show in September of 2015. In November we started building the new body shop, where we’re already making the bodies of the current 911. Six months after that, we began clearing the field for the new assembly facility. In parallel to that, the Taycan’s production facilities were being planned. And twelve months later, the first prototypes and development cars were being made at the pilot center.

That’s all very ambitious. What are the biggest challenges involved?

We’re reinventing our main site with the Taycan, building a factory within a factory. We’re integrating a completely new production facility with new technology and new processes—while running at full production capacity in our existing plant. Remember that we’re already making more cars in Zuffenhausen than ever before, with 250 two-door sports cars a day. That’s like open-heart surgery and affects all the relevant areas, from ensuring smooth ongoing production processes to preparing for the start of Taycan production and looking out for the interests of our neighbors. After all, our main site borders residential and industrial zones, and several roads and even a rail line run through it. That all requires sophisticated logistics, and is also why we’ll be producing the Taycan on multiple floors and in different building complexes.

Wouldn’t it have been easier to make the Taycan at Porsche’s plant in Leipzig? More space is available there than in Zuffenhausen.

Zuffenhausen is the birthplace of our sports cars. The Taycan is a clear sign of our commitment to this traditional site, which we’re leading into the future by preserving jobs here and even creating new ones. The pact with our employees means we’ve made the Taycan “our project.” In addition to good neighborly relations, the supervisory and executive boards also needed the support of the workforce before deciding to take such an extraordinary step. The employees are also participating financially in the project by putting a quarter of a percent of their negotiated pay raise into a fund. This type of arrangement is unique in the automotive industry. Moreover, we’re putting highly innovative production methods into practice with the Taycan and taking a step toward the factory of the future. We call it Porsche Production 4.0—smart, lean, and green. Smart stands for flexible and connected production. Lean means responsible and efficient use of resources. And green refers to sustainability and environmental protection. After all, our aim is to continually lessen the environmental impact of our products. Since 2014, we’ve reduced the CO2 emissions per car in our production and logistics by more than 75 percent.

So you’ve achieved your goal?

No. Because Taycan production in Zuffenhausen will be carbon neutral. And our vision extends even further. We want our production to leave no environmental footprint whatsoever, with respect to the supply chain and the entire life cycle of our products.

Regarding the products, does that mean Porsche will only be making electric cars?

By no means. Porsche is and will remain a sports-car brand with high-powered cars—regardless of whether they’re driven by emotional gasoline engines, intelligent plug-in hybrids, or soon by purely electric systems as well. We’re a premium manufacturer, so our share of the market is relatively small. But we stand behind the climate goals agreed upon in Paris on December 12, 2015, and are clearly responsible for reducing our CO2 emissions. We can already do that without losing any of our performance levels or emotional appeal. For example, more than two-thirds of our Panamera customers in Europe are already opting for the plug-in hybrid version. We’re pursuing this development further in the purely electric sports-car sector with the Taycan.

How far can that go?

We’re expecting half of Porsche’s entire product range to be sold with an electric or hybrid drive by the middle of the next decade.

That must be a real culture shock for traditional Porsche customers.

Perhaps. But I can assure them that they’ll find everything they expect from our brand in a purely electric Porsche like the Taycan: extremely sporty driving dynamics, outstanding performance figures, and not least of all, a high degree of emotional appeal. I’m entirely convinced that the more attractive these products are, the faster electric mobility will be accepted. We’re sure that we’ll succeed in this and meet our customers’ expectations.

How does producing a fully electric sports car differ from producing one with a conventional engine—and how is it similar?

It’s not the case that we simply put a battery where the gas tank was and replace the combustion engine with an electric drive. And installing a battery, an electric motor, and the requisite cooling system is obviously a different matter than installing a combustion engine with its exhaust system. But the Taycan is also a car whose body needs to be assembled and painted. Large parts of the production process are the same. However, new specialized knowledge is needed to handle the high-voltage systems, which is why we’re giving all of our employees additional training. After all, we want to ensure that the Taycan embodies the high standards of quality that have always been associated with Porsche. Moreover, we want to ensure that purely electric sports cars can be individualized to the same degree as the current range of models. Our customers value the high degree of individualization that Porsche offers. Everyone gets exactly the car they want. You could say that we do series production of one-of-a-kind cars. That’ll be true of the Taycan as well.

There won’t be a conventional assembly line anymore for producing the Taycan.

You’re right. We’ve restructured the Taycan’s production from the ground up. That has the advantage of letting us integrate highly innovative production standards. We’ll be assembling the Taycan on what’s known as a flexi-line with driverless transport systems that move automatically from station to station. That gives us more freedom not only in our production operations but also in the architecture of our new plant. The flexi-line offers enormous benefits in terms of both investment and flexibility. We saved around 30 percent of the investment costs by not setting the conveyor systems into the foundation. And because the line isn’t rigid we can modify it at any time, integrate new elements, or do bypasses to meet special customer wishes.

The Taycan production system is also setting standards in digitalization.

That’s true. People often use the word “revolution” in connection with Industry 4.0, but I see that differently. Because what we’re doing today is a further development of what we’ve already been doing in the past with automation, simulation, and virtual product and production planning. Digitalization is enabling us to design work environments more ergonomically. At the same time, it supports our employees in analyzing complex processes and procedures. It also generates transparency, for example, by letting us examine where and why a certain data flow might not be taking the best possible course. It helps us identify potential that we might not have recognized otherwise.

Is this a precursor to a factory without any people?

No, we have a tradition of focusing on people. Nothing will change there. We’re automating our processes to make things easier for our colleagues and to support them in their work, but we continue to place a premium on highly qualified employees. For the very complex work that our company does—putting superior-quality, individualized, and top-notch sports cars on the roads—it’s essential for us to combine the latest technology with the expertise of our specialists.

So you won’t be cutting any jobs?

Over the last few years we’ve nearly doubled the size of our workforce—to more than 32,000 employees. We’re hiring an additional 1,500 colleagues for the Taycan and Cross Turismo alone. At Porsche, electric mobility is an engine for job growth.

Reimold, fifty-eight, started his career with a toolmaking apprenticeship that led to top honors in a national toolmaking competition. After studying production engineering at the Heilbronn University of Applied Sciences, he joined Audi in Neckarsulm as a trainee. He later directed the body shop there as well as production of the innovative aluminum space-frame A8 and A2 cars. In 2002 he supported the run-up to production for the Lamborghini Gallardo in Sant’Agata Bolognese, Italy. One year later he took on production planning in Neckarsulm for pioneering Audi models like the A6, A8, and R8, before assuming directorship of the site in 2009. As the CEO of Volkswagen Slovakia in Bratislava from 2012 to 2016, he also prepared the launch of production for Volkswagen’s fully electric e-up! compact car, as well as for the Porsche Cayenne. He joined Porsche AG’s executive board in February 2016 as the member in charge of production and logistics. Reimold places a high priority on sustainability. Achievements under his leadership include a dramatic reduction in production-related CO2 emissions and carbon-neutral production of the Taycan in Zuffenhausen in the future. His declared aim is the Zero Impact Factory—production without environmental effects.