You've got to be a true POS to do this.

There's a new rash of vandalism that involves an individual jumping on cars and kicking the windshield. A brand new Tesla Model 3 was attacked (as were some other cars) and it recorded the entire incident thanks to the owner-installed dashcam.

See it here (above and below) and let's see if we can't collectively identify and catch this POS. 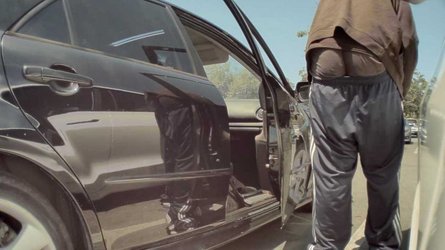 Glass-Breaking Butt Is Filmed In Action By Tesla Sentry Mode

Some details on the incident below via Fox 12 Oregon:

Wickwire says other people nearby have also reported damage to their vehicles, but they haven’t caught it on video.

“I’m so glad I got this footage because other people don’t have video of this guy,” Wickwire said. ‘There would have been no chance of finding out who it was.”

Wickwire says he posted about the damage online and discovered that other people’s cars were also damaged early Thursday morning.

“Turns out, a couple other people within a few blocks of where I live had the exact same thing happen,” Wickwire said.

If you recognize the vandal or have any additional information to provide on this incident, Portland Police would like to be contacted. You can reach them at this phone # here: (503) 823-3333

Vandalizing Teslas seems to be some sort fo sick craze. We suggest you enable Tesla Sentry Mode at all times when/if parked in an area outside of your own property. It may not prevent vandalism, but it could help to catch the perpetrator.