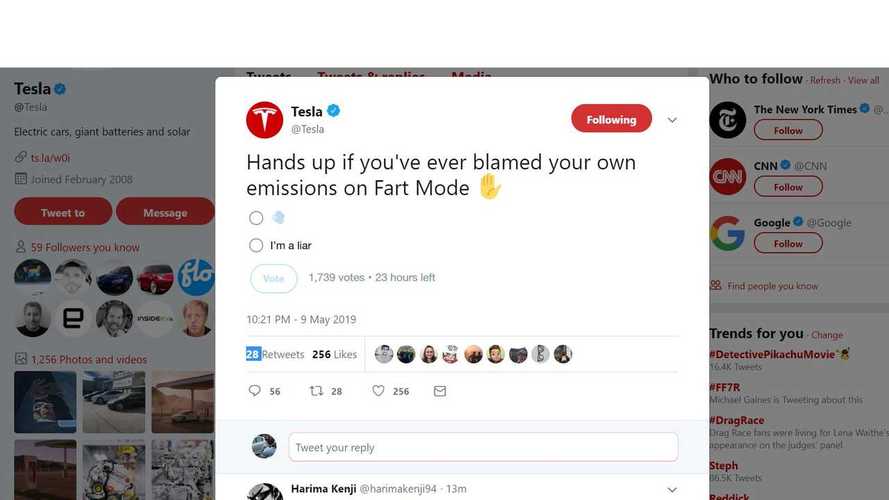 Tesla fans have noticed that the automaker's official twitter account has had a "special glow" about it in recent days.

Most corporate twitter accounts are pretty clean cut and conservative. Generally, a marketing team will want to stay on message and on brand. Tesla has up until this point primarily served customers in the market for high end luxury vehicles. Naturally, the attitude of their social media presence has reflected this audience.

With the advent of the Standard Range and Standard Range + Model 3, Tesla theoretically could pivot its marketing toward a younger and more tech savvy buyer. Broadening their reach on social media beyond the enthusiasts and existing customer base.

As of May 1st, Tesla's official twitter page seemed to be moving along the same trajectory that it had been for years. On that day, the company posted a pair of classy photos of a Tesla Model 3 and a Supercharger against a gorgeous desert backdrop. Posts like these would typically be made once or twice a day, with press releases or product information sprinkled in every few posts.

Vital Public Service Announcement: Your Model 3 Does Not Love You
⠀

Caught On Video: Tesla Fan Has S3X In Public (NSFW)

But earlier this week the tone seemed to shift. On Monday morning, the official Tesla twitter account kicked off the week with a very un-corporate, wordless post that has since gathered over 4k retweets and nearly 60k likes.

Since then, the quantity of posts and daily engagement with users have shot up significantly. Many of these posts have more directly interacted with their followers than the company had in the past. Thousands of owners responded to one late night inquiry about what they had named their Teslas.

Through the night, Tesla continued to respond with jokes, memes and one liners the same way any other Twitter user might. As night turned into day, the account continued to drift away from the company's typical social media strategy.

Instead, Tesla has moved more into the direction of... well, we don't know exactly. But the InsideEVs writing staff has gotten a kick out of it.

Someone is certainly having some fun at the office! So just who is this mysterious social media manager tweeting fart jokes deep into the night?

Did Tesla hire a 13 year old marketing intern to better appeal to the youth market? Perhaps the official Tesla Twitter account has been hacked? Maybe the social media manager is totally wasted?

It's possible that Tesla's 13 year old marketing intern got hammered drunk and hacked into the corporate twitter account.

We may never know the answer for certain. Some things are better left a mystery. Nevertheless, most Twitter users have come to the same head cannon conclusion: