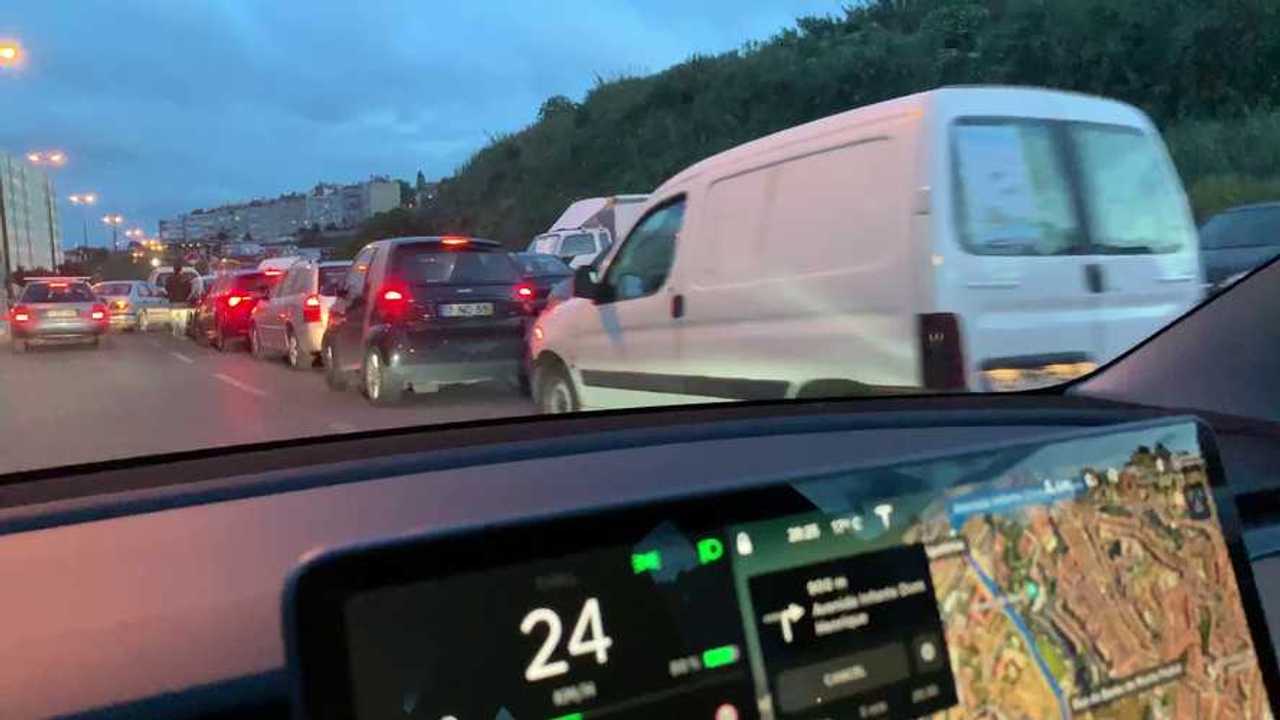 This Model 3 owner doesn't have to worry about being stranded or waiting in long lines like others.

Portugal is experiencing a serious oil crisis as fuel truck drivers are on strike, hundreds of gas stations have been closed and the situation is worsening. Even flight operations are being affected during this time of crisis.

A Tesla Model 3 owner recorded the footage of Portugal's dire situation where hundreds of ICE vehicles are seen stationary on the roads of Lisbon, waiting for 'gas' to arrive — massive gas anxiety has struck the country while Tesla and other electric vehicles shine like a star. According to Reuters:

An energy crisis was declared by the government on Tuesday evening, meaning security and emergency services now have priority when it comes to refueling at gas stations. In addition, an alert was issued to ensure security forces are mobilized to run fuel supply operations and guarantee people’s safety.

Across the country, panicked drivers queued outside gas stations to fill up their tanks. More than 200 gas stations were already shut.

Fuel company Prio, which operates in Portugal, told news agency Lusa that it expected almost half its stations to run out of gas or diesel by the end of the day.

@Lourencovc shared the video of hundreds of gas cars waiting to get refilled while he was driving his Tesla Model 3 which liberated him of this worry. He said in his tweet:

There is a huge gas crisis in Portugal due to a truck drivers strike. Getting home this is the scenario. A never ending line to the gas station. It can impact all of us if it’s not solved soon, but at least I’m good knowing my Model 3 has nothing to worry about.

Let's just watch for 10 seconds how it feels to be free from the clutches of the big oil, truly liberating.

Above: Video of a Tesla Model 3 roaming worry-free on the roads of Portugal while ICE cars wait in long lines outside the gas stations (Video credits: @lourencovc via X Auto / Iqtidar Ali)

Now if you're thinking 'what if Portugal's electricity used to charge Teslas/EVs is dependent on oil?' — nope, a big chunk is dependent on renewables and by 2020 54% of Portugal's energy generation will be from renewable sources solar, hydro, wind, and biomass combined (read more on Wikipedia).

According to the Model 3 owner:

Actually, in Portugal, my electricity bill is around 68% renewables. But you can actually subscribe to a Green Plan where all the energy is 100% renewable. We’ve had a few days a year completely run on renewables.

It was remarkable when Tesla started its massive Model 3 shipments to Europe. Although I'm not sure about precise EV stats in Portugal, other countries like Germany, Switzerland, Norway, and Belgium have been impacted by the electric vehicle revolution already.

If even 50% of Portugal's cars were electric, this situation would not have escalated to a national level catastrophe. To that end, this is the time when governments around the world need to rethink their strategy towards the adoption of EVs.

Tesla's electric vehicles have already proven useful in various times of crisis like last year's California wildfires where the Tesla Bioweapon Defense Mode helped rescue several people. After all, you can't run into wildfires with a tank full of gasoline.