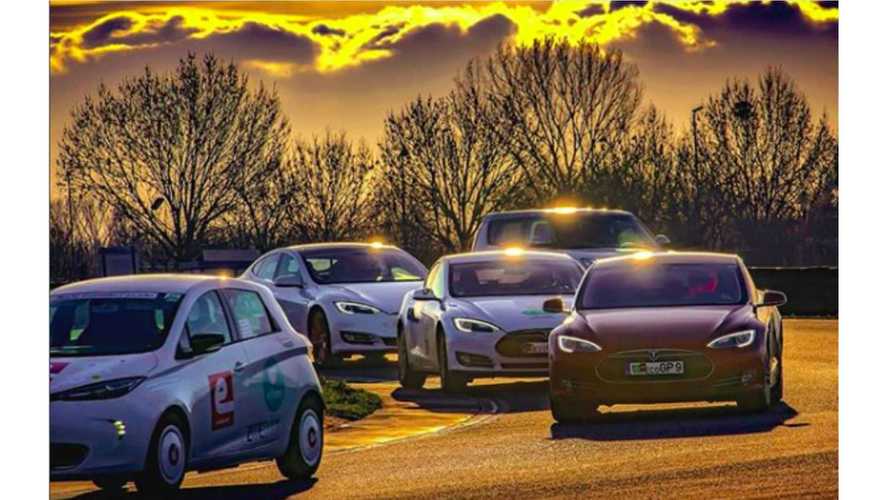 TESLAS AND OTHER STOCK EVS COMPETE IN THE ECO GRAND PRIX

The world of auto racing is getting electrified. The international Formula E series, now in its fifth season, brings world-class electric racing to cities around the world. Later this year, Tesla vehicles will begin competing in the FIA-sanctioned Electric Production Car Series. Electric vehicles have also distinguished themselves at the annual Pikes Peak Hill Climb, on the autocross circuit, and on the world’s shadowy street racing scene.

The eco Grand Prix is an inclusive and egalitarian racing series that has a mission to highlight the fun electric cars can deliver without damaging the environment. Adrian Smith, writing in Auto Futures, explains that, unlike Formula E, the eco Grand Prix is open to all drivers, not only professional racing teams. Since its inception in 2013, the series has conducted a dozen competitions. In 2018, it held events in Spain, Germany and the Pyrenean principality of Andorra, where several Model S drivers took part in a race on a snow-covered track.

Above: Electric cars battle it out in the snow during the eco Grand Prix (Instagram: ecograndprix)

The most recent eco Grand Prix event was an EV drag race that took place in Abu Dhabi in January, part of the Electric Vehicle Road Trip Middle East. As always, the race was designed to test and promote EV technology.

“Every event is an endurance challenge,” says Luc Perraudin, ecoGP’s Event Manager. “Every team, private or , will make as much distance within the provided time (at least 6 hours at present) based on CEE 32 amps 22 kW maximum - so every EV has the same potential chance to make it. EcoGP is only for 100% - products that everybody can buy. They are not allowed to be manipulated for the challenge.”

“Our aim is to show the multiple aspects of the existing serial EVs,” Perraudin adds, “during heat and wind (Spain), snow and ice (Andorra) and extreme endurance challenge (24 hours in Germany).”

Series Organizer Rafael de Mestre is a long-time booster of EV racing - in 2012, he set a world record by driving around the world in 80 days in a Tesla Roadster. He explains that ecoGP was created “to show the state-of-the-art endurance of electric cars under real conditions driven by normal drivers.”