Kia set about building an electric crossover that, according to the automaker, doesn’t belong to any specific segment. Some might say such a definition is exactly what a crossover is.

The company's first dedicated EV wants to excite you.

The designers at Kia behind this curious concept envision – or perhaps a better word here is imagine – a  world where electric vehicles aren’t personal mobility machines. Actually, yes they do, but they also want people to have an exciting relationship with their vehicle. Imagine By Kia (yes, that’s the name) is said to embody such warm feelings throughout its design, from the six layers of chrome silver paint to the 21 high-resolution screens that sit atop the dashboard like a series of razor blades.

“Automotive design is about capturing the heart and making it beat that bit faster for that bit longer,” said Gregory Guillaume, vice president of design for Kia Motors Europe. “We believe that there’s absolutely no reason why that should change simply because the car is electric. That’s why our all-electric concept is designed to not only get your pulse racing, but to also signpost our holistic and emotional approach to electrification.”

To evoke those emotions, Kia set about building an electric crossover that, according to the automaker, doesn’t belong to any specific segment. Some might say such a definition is exactly what a crossover is, but this vehicle does appear to blur the lines just a bit more than normal. The overall shape follows current design trends of popular coupe-crossovers with a tall beltline and muscular haunches, but it doesn’t sit quite as high. The roof rakes back rather steeply, and though it’s a liftback like many current offerings, the rear pillar is much thicker and almost sedan-like in its design. 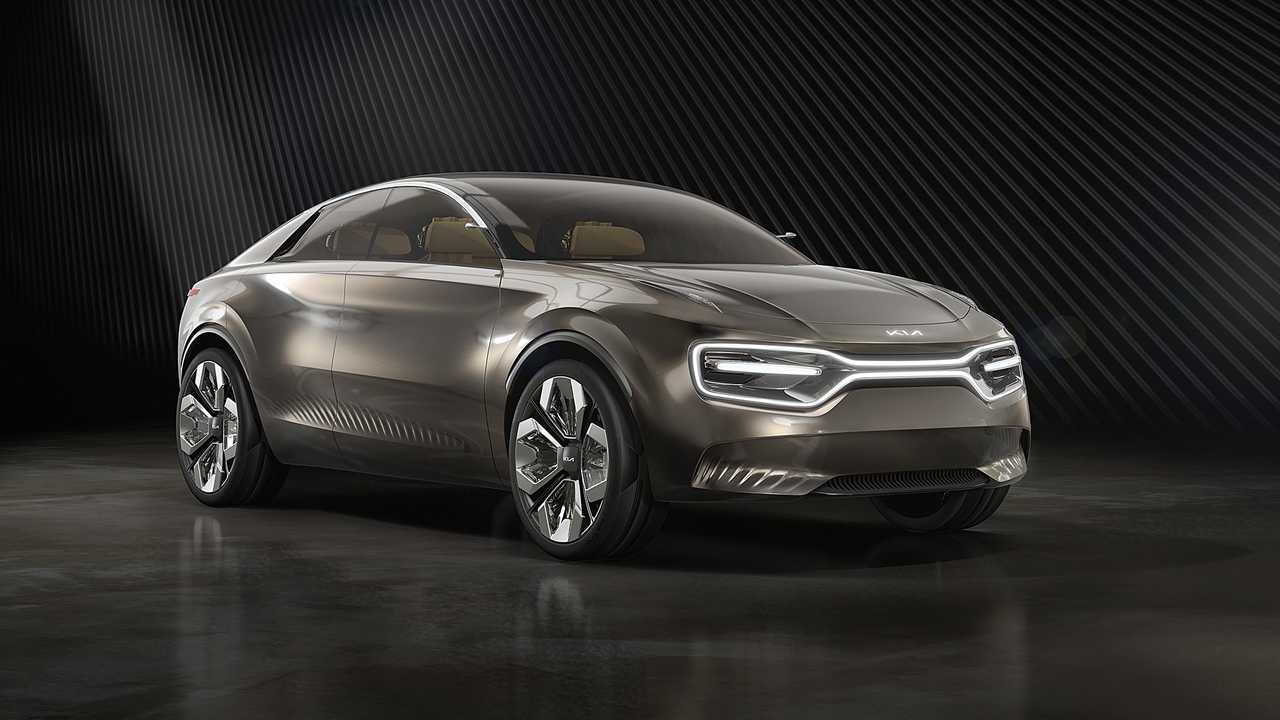 Inside is where Imagine by Kia gets really strange. The dash isn’t so much a dash as it is a shelf for the aforementioned 21 high-resolution screens, arranged in such a manner as to give a curved sensation for those inside the car. The screens show all the vital vehicle information in a way that Kia itself describes as “a humorous and irreverent riposte to the on-going competition between some automotive manufacturers to see who can produce the car with the biggest screen.” In other words, it’s literally a joke. But one that the automaker still considers a “fresh and witty approach” to today’s onslaught of internal screens.

Lost in all this hyperbole about design and emotion is the fact that Imagine By Kia is the automaker’s first dedicated electric vehicle. It’s not based on any existing model, but unfortunately, Kia doesn’t have any details on actual electric power or range. We’re only told it utilizes a compact drivetrain with an induction-charged battery pack, and that the lack of a traditional engine gives it more storage space in the front and back.

Imagine By Kia may or may not be an exciting take on an all-electric future, but it's certainly interesting.