The Nissan LEAF hit a rough patch in early 2017. That’s when it was upstaged by the 238-mile Chevy Bolt, which scored more than twice the LEAF’s sales in the US that year. The second-generation LEAF upped its range to 151 miles in 2018 – and improved its design – but Nissan was still not competitive on range. At last, Nissan will put the past two years in the rear-view mirror when the new, big-battery 2019 LEAF Plus goes on sale in March.

More about Nissan LEAF Plus 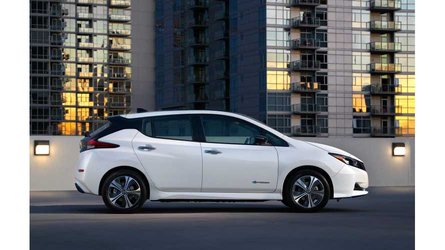 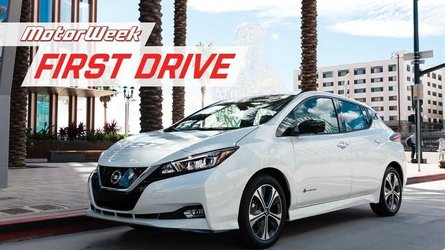 Last week, InsideEVs took a first drive in the long-awaited 62 kilowatt-hour Plus version of the Nissan LEAF. Our route was a mix of city, highway, and meandering coastal roads near San Diego. The day shifted from brilliant California sunshine to a February drizzle. But our top-of-the-line 2019 LEAF Plus SL steadily delivered on the expected range – using less than half the pack’s energy for the 112-mile journey. 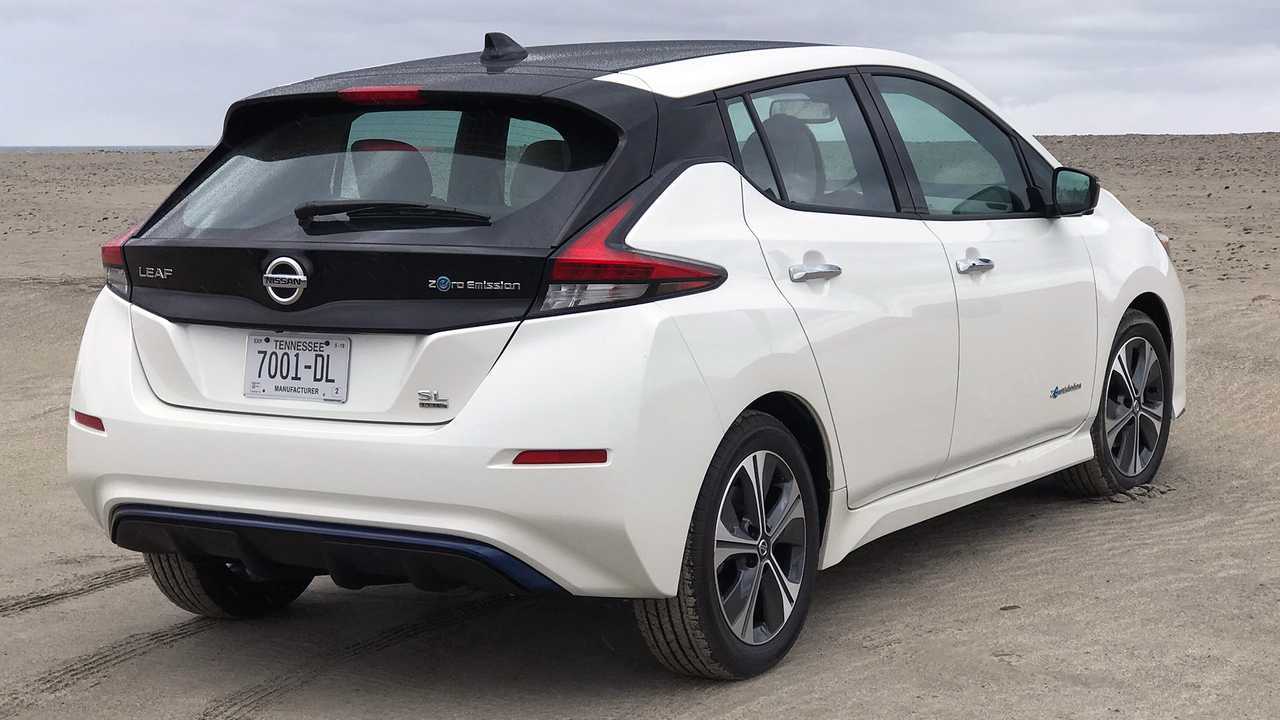 I was gentle on the accelerator for the most trip and engaged the car’s heavy-regen e-Pedal function. Other journalists at the event pushed the performance of the LEAF’s motor and refrained from e-Pedal – burning through more than half the pack in the same distance. Similar aggressive driving could reduce the LEAF Plus’s range to the edge of the 200-mile mark. 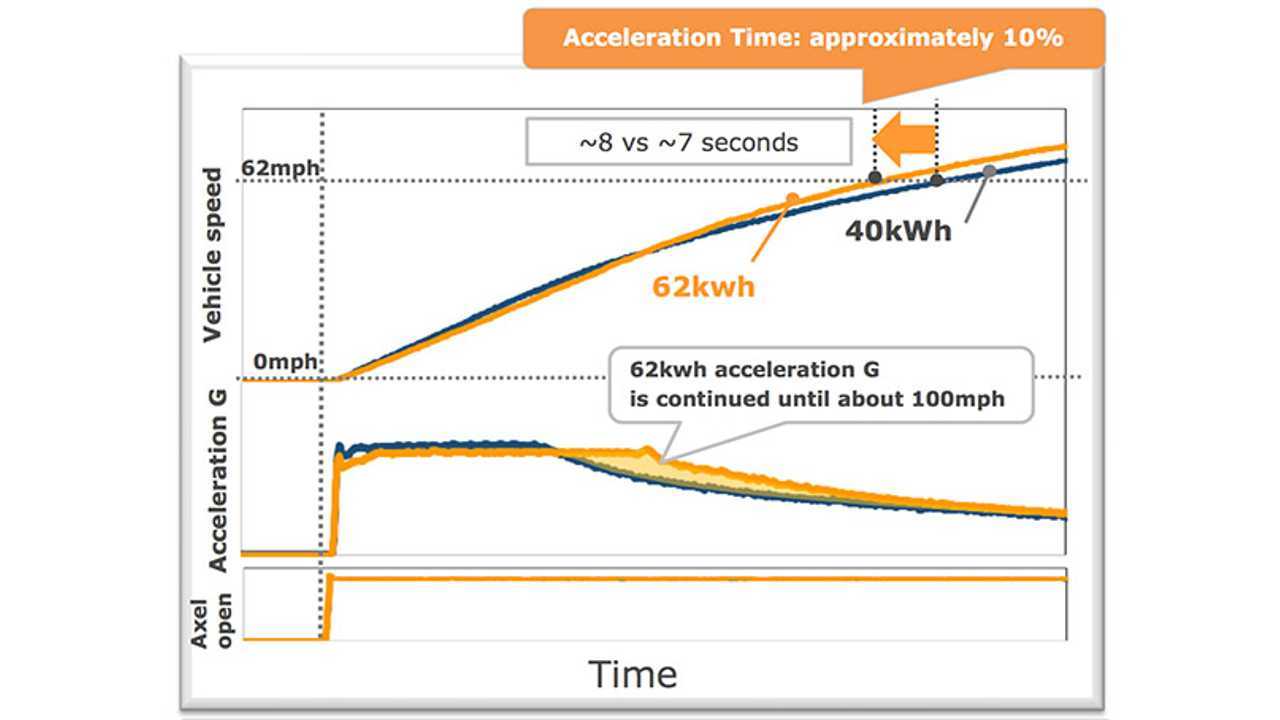 The LEAF Plus's extra power really kicks in at about 50 miles per hour. (Source: Nissan)

The story of the LEAF Plus, imminently arriving at dealerships across the United States, is not only about its impressive 50-percent increase in range. There’s also a 46-percent increase in output from its motor. The jump from 147 horsepower to 214-hp was visceral during our drive, especially during highway passing maneuvers at speed.

The extra oomph was less evident in town. Perhaps the additional 345 pounds of weight compared to the standard LEAF – of which 300 pounds come from the expansion from 192 to 288 cells in the pack – minimized the impact of the added horsepower. Nissan officials said the LEAF Plus’s zero-to-60 time is about seven seconds, a one-second advantage over the standard LEAF.

With the introduction of the LEAF Plus, Nissan is openly targeting the 238-mile Bolt, as well as the 239-mile Kia Niro EV and the 258-mile Hyundai Kona Electric. “We see the LEAF Plus as a conquest vehicle,” said Jeff Wandell, manager of EV communications for Nissan. “We’re in the game now.”

The Price Is Right

Official pricing for the LEAF Plus is not yet available, but Wandell said that the LEAF Plus would be “very competitive from a pricing standpoint.” That probably means the LEAF Plus base S trim will start around $36,000 with the upper SV and SL versions topping out in the mid-$40,000s.

Also, consider that the Bolt’s $7,500 federal tax credit will be phased out over the next year because General Motors reached the 200,000-sales limit. And Hyundai-Kia is not selling its fine EVs across the entire country. So the standard and Plus versions of the LEAF are well positioned.

Any conquests will be won based on price and availability – despite the LEAF Plus still slightly lagging in the range game. Official EPA range numbers are not yet published. But Nissan said the target for the LEAF Plus S is 226 miles – while the better-equipped SV and SL versions are targeted at only 215 miles. 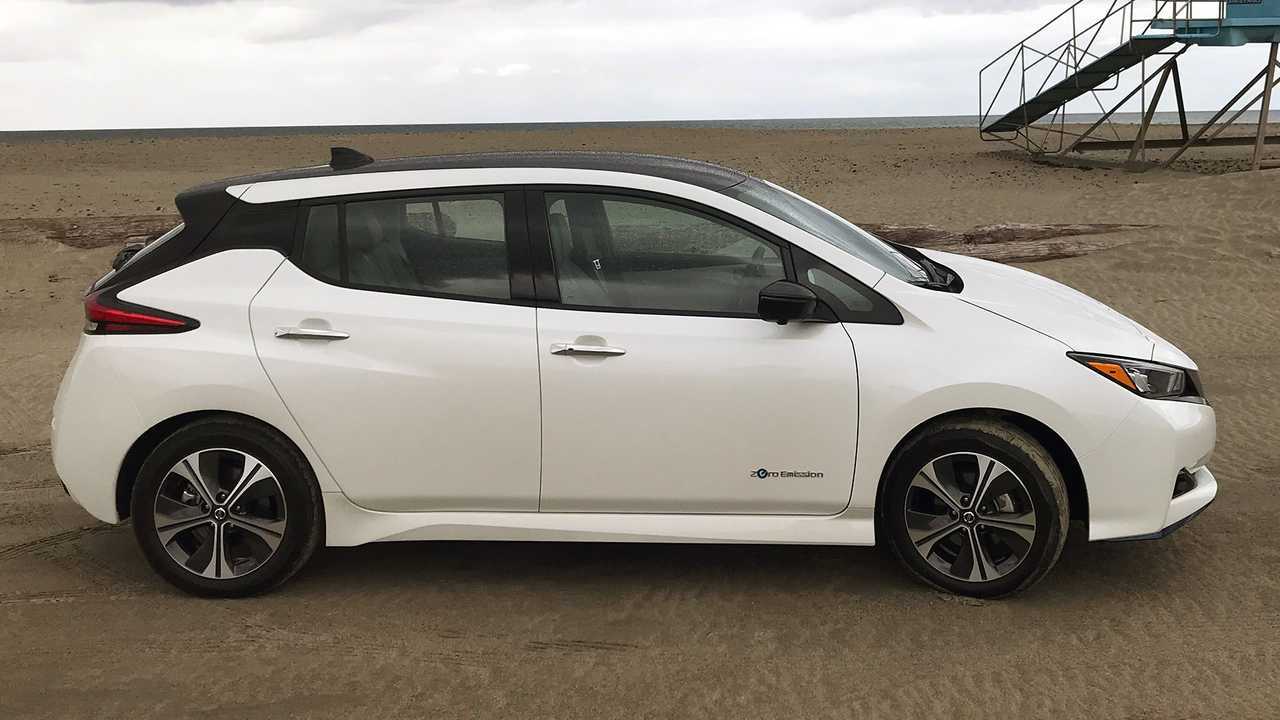 Nissan explained that reduced range in the upper trims is due to a combination of added weight, the use of 17-inch rather than 16-inch wheels, and changes in rolling resistance between the S’s Bridgestone Ecopias and the SV/SL’s Michelin Energy Saver tires.

Drivers of the LEAF Plus will easily make up those last few miles of range by engaging Nissan’s aggressive e-Pedal function. If I owned the LEAF Plus, I would use it all the time despite how the e-Pedal makes the accelerator pedal feels too restrictive (almost sticky) in stop-and-go traffic. On the other hand, in San Diego, the e-Pedal made for delightful cruising along sweeping roadways above 30 miles per hour. When engaged, e-Pedal removes vehicle creep.

Same On The Inside

The LEAF Plus’s cabin is unaltered from the standard version, despite the bigger battery pack. Nissan cleverly altered the battery’s configuration with cells placed three (rather than two) in parallel. “We now have a flexible architecture with modules of different sizes,” said Nate Herbrandson, manager of durability and reliability at Nissan. The LEAF Plus also utilizes four millimeters of the standard version’s “dead space” under the cabin – and lowers the ride height by about six millimeters. 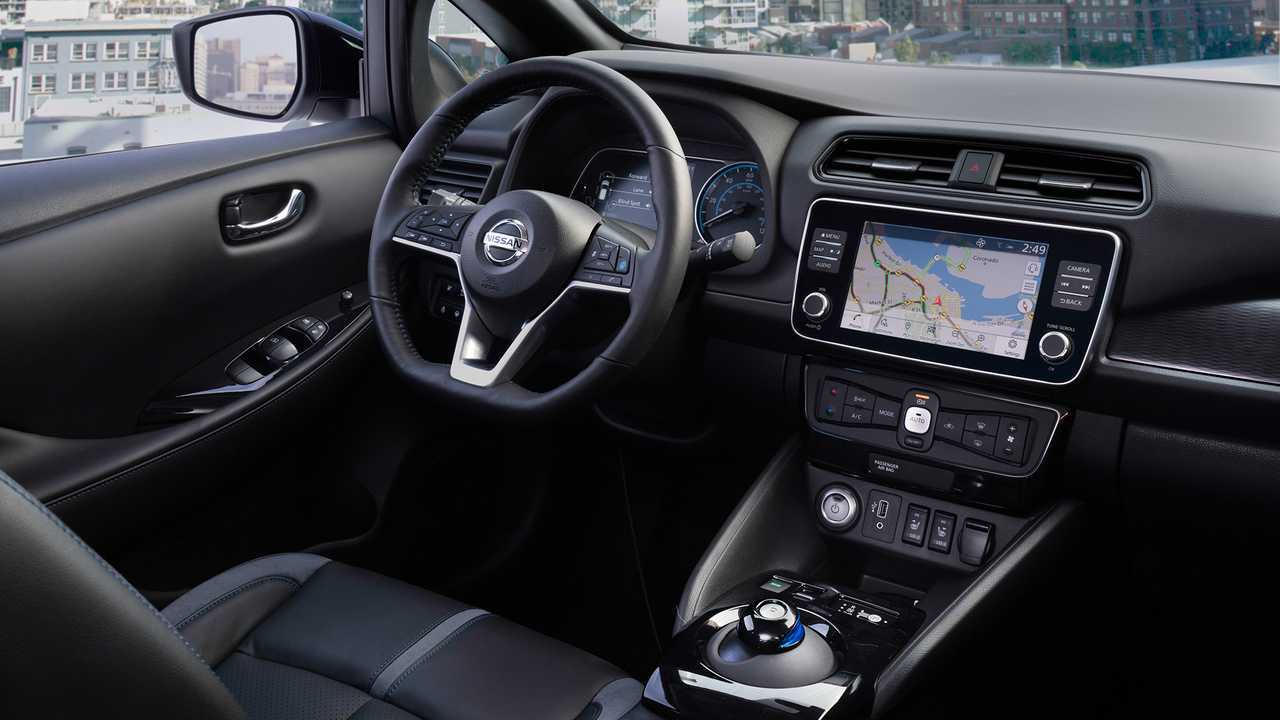 The LEAF is right in line in terms of passenger and cargo volume compared to its chief competitors. Regardless, there’s something about the LEAF’s layout that doesn’t quite work for my 6-foot-4-inch frame. The driver’s seat doesn’t travel quite far enough back for me to extend my leg – therefore it digs into the center console. At the same time, my seating position behind the steering wheel is too high for ideal visibility forward and through the tapered windshield. Most adult passengers will be snug in the rear seats.

The LEAF’s seats and the skillful combination of hard and soft plastics, and racing-style steering wheel, are arguably nicer than what GM offers in the Bolt. The Plus’s larger 8-inch screen, now with pinch-and-zoom gestures, is a welcome upgrade. (Based on my recent drive of the Niro EV, the Kia electric crossover is better appointed than either the Nissan or Chevy.) 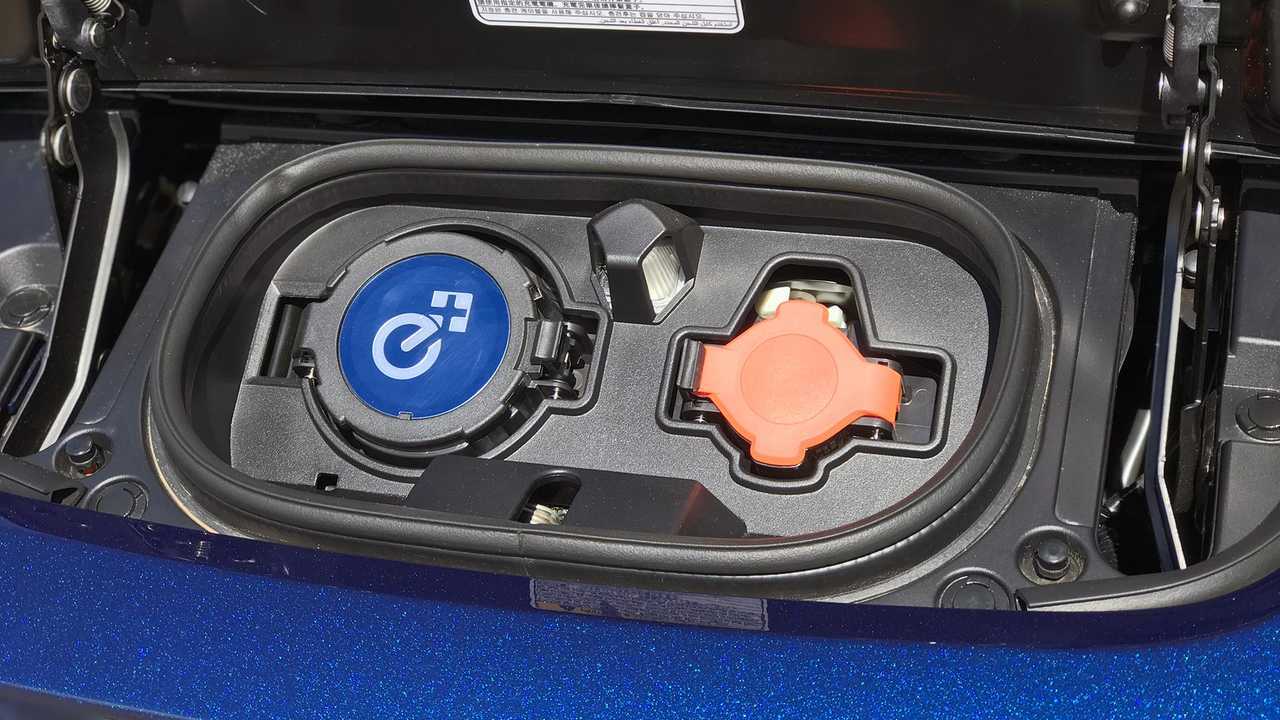 Nissan remains committed to the CHAdeMO quick-charging. The LEAF Plus version uses a special logo on the port.

Nissan is sticking with the CHAdeMO quick-charging standard and the use of passive air cooling of the battery (rather than liquid-cooling). Herbrandson, who is based at Nissan’s Arizona testing center, told me that liquid cooling “wasn’t necessary” for this vehicle. The bigger battery will be taxed less. “You can’t accidentally damage this battery by overheating it,” he said.

The Nissan Plus can now accommodate up to 100 kilowatts of juice – a measure of future-proofing for the EV. Although Nissan executives admitted that only about 10 CHAdeMO stations in the country are now equipped for 100 kilowatts. On a more practical note, the LEAF Plus’s standard portable charging unit can now handle Level 2 240-volt charging. So purchasing a separate home charger can be avoided.

The 62-kWh LEAF Plus handles with confidence while checking off all the essential boxes for good, reliable transportation in a compact electric hatch. When it hits dealerships in a few weeks, Nissan will uniquely be able to compete at two price levels.

The existing 150-mile LEAF, which starts just below $30,000, stacks up well against the likes of the 124-mile Volkswagen E-Golf and 124-mile Hyundai Ioniq Electric. And the new competent, high-tech, long-range LEAF Plus can go up against the Chevy Bolt, Hyundai Kona EV, and the Kia Niro Electric. This strata of EV roughly sells in the low-$40,000s. 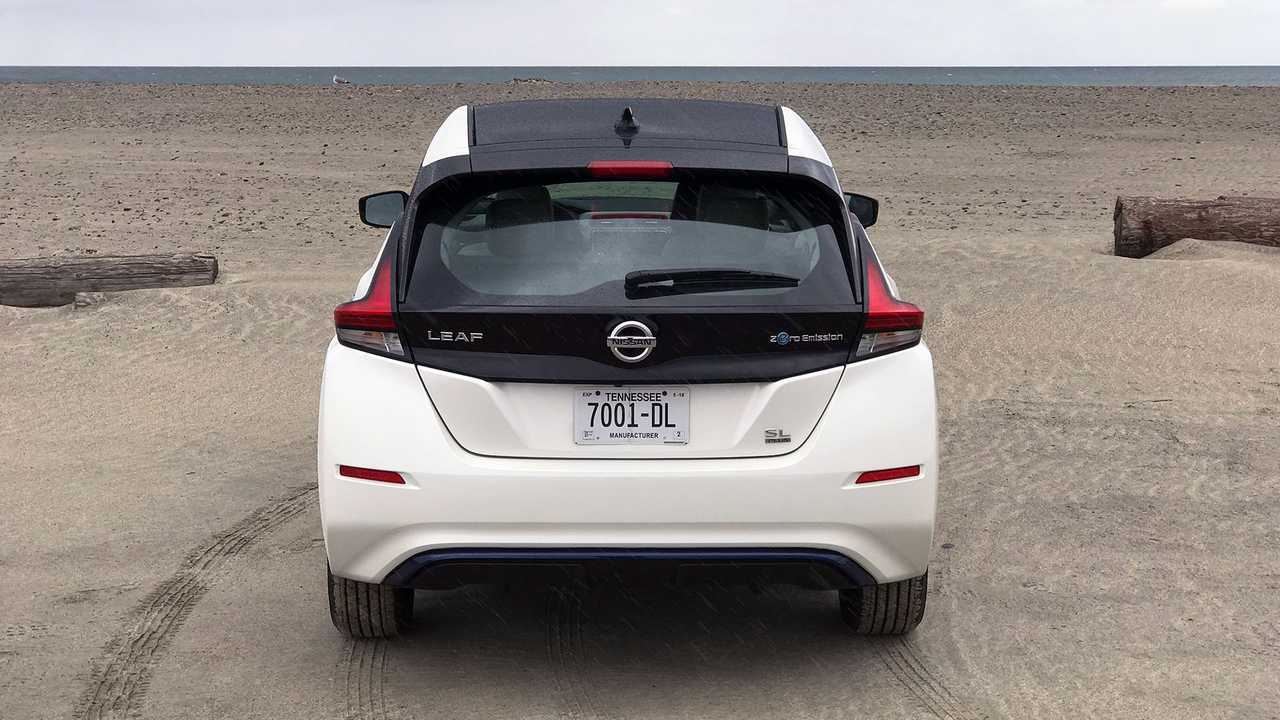 “The motto for Nissan always been to mass-market a good electric vehicle at an affordable price,” said Jean-Phillipe Lattes, senior manager of EV marketing and sales for Nissan North America. In my chat with Lattes, he threw in an apparent dig at Tesla for not yet achieving its affordability goals. “It’s almost easy to make a $60,000 or $70,000 EV,” he told me. Lattes said Nissan is committed to continuing to offer the 40-kWh model for around $30,000.

Lattes added that there’s a “huge market” for consumers that insist on an EV with at least 200 miles of range. Our brief first hours with the LEAF Plus revealed that Nissan now has a compelling option for those buyers.