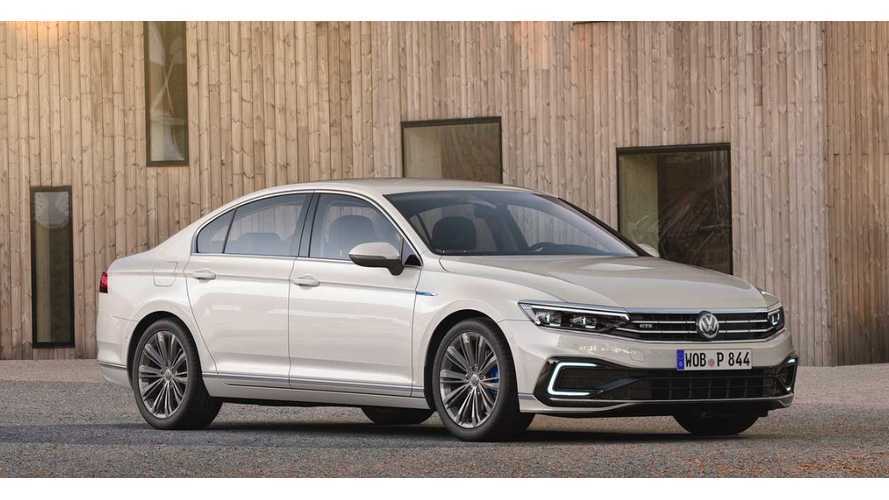 Volkswagen just introduced the new facelifted Passat, which looks sleek and without a doubt is one of the best-looking cars in its segment. The latest iteration comes on the market when the German manufacturer expects to sell its 30 millionth unit (second best-selling Volkswagen ever).

Besides the enhanced look, Passat got updated tech and most importantly for the plug-in hybrid version, there is significantly more range. We knew that the new PHEV was coming since summer 2018 when the test mule was spotted in camouflage.

According to the press release, pre-sales of new Passat will start in May in some European countries and the market launch will start from the end of August onwards (Germany), but we are not sure whether GTE will be available immediately like the conventional versions.

It's of course great to see that the Passat GTE will be back, after the previous version was prematurely deleted from the offer in September 2018, because it wasn't worth certifying it for the WLTP requirements ahead of the facelift.

Zero emissions in the city. Volkswagen will launch the new Passat GTE with an enhanced plug-in hybrid drive as both saloon and estate models. The combination of electric motor and petrol engine brings great benefits: On the one hand, the GTE models with their combination of electric drive mo-tor and efficient turbocharged petrol engine (160 kW / 218 PS system power) provide the benefits of a long-distance vehicle. On the other, they can be used as a zero-emission vehicle in the urban environment. With the new Passat, this now works even more impressively because the new GTE is equipped with an even larger battery. The battery’s energy content has been increased from 9.9 kWh to 13.0 kWh – a plus of 31 per cent. The pure electric range was thus extended correspondingly. This is now up to ap-prox. 55 km** in the new, realistic WLTP cycle; this is equivalent to a range of around 70 km** in the old cycle (NEDC) (20 km** more than the prede-cessor). In addition, a new operating mode configuration has made it much easier to reserve sufficient battery capacity for the target destination in a city. The plug-in hybrid drive is recommended for most commuters as the ideal engine and the Passat GTE can be used as a zero-emission vehicle in a targeted manner in urban areas and can therefore be exempt from road tolls in major cities such as London (congestion charge).

New operating mode configuration. The Passat GTE always starts in E-MODE if the lithium-ion battery is sufficiently charged. The high-voltage battery in the Passat GTE models can be charged via the external electricity grid or via the internal TSI engine and recuperation during the journey. In order to be able to travel in E-MODE in town at the end of a longer trip, Volkswagen has reconfigured the operating modes of the hybrid system and therefore simplified battery recharging during the journey. Instead of the previous five operating modes, there are now only three:

Intuitive charging during the journey. The driver selects the Driving Mode menu via the Infotainment system to charge the battery during the jour-ney. E-MODE and Hybrid modes are available for selection here. If the driv-er selects the Hybrid field, a battery with ten scale steps is shown together with an equals sign (“=”) as well as arrows pointing upwards (“∧”) or downwards (“∨”). If the driver selects “=“, the battery’s energy level is maintained at the same level; if they select “∧” then the battery is charged via TSI and recuperation to the selected level on the scale; if they select “∨” then the battery can be used until it falls to the minimum level.

Charging via the electricity grid. The Passat GTE is equipped with a 3.6 kW battery charger. When connected to a conventional electrical grid with 230 volts / 2.3 kW, the battery – if completely empty – will be fully charged within six hours and 15 minutes. The charging time falls to four hours with a wall box or a charging station with 360 volts / 3.6 kW. Charging starts with connecting the plug. Delayed charging is another available option. The time delay can be set using either the Infotainment system or an app. The charging process can also be activated directly via the app – in much the same way as a remote control. In addition to the charging process, the temperature inside the vehicle can be raised or lowered – depending on the temperature outside – via the time pre-set function.

Overview of drive components. The new Passat GTE is powered by a turbo-charged stratified injection engine (1.4 TSI) and an electric motor. This TSI engine delivers 115 kW / 156 PS. The electric motor generates precisely 85kW / 115 PS. The new high-voltage battery – located in the vehicle floor in front of the rear axle – supplies the electric motor with power. For power transmission, the Volkswagen is equipped with an automatic 6-speed dual-clutch gearbox (DQ400E) developed especially for use in hybrid vehicles. Other components of the hybrid drive include power electronics (this con-verts the battery’s direct current into alternating current for the electric motor) and the battery charger.