The energy tech company makes ultracapacitors (and other interesting things).

Tesla is buying up Maxwell Technologies. In a deal expected to be finalized in the second quarter of 2019, the California automaker has offered $4.75 per share for the company. That's a healthy 55-percent increase above the energy storage technology company's share price of $3.07 at Friday's market closing. The transaction is said to take the form of a stock swap and received unanimous approval from the Maxwell board. The acquisition is an interesting one. Maxwell is mostly known for its ultracapacitors, which are used by other automakers. Indeed, Volvo's Chinese parent company Geely partnered with the firm to use the energy storage devices in five of its hybrid products. But does that mean Tesla has picked them up for that particular technology? Maybe, but it should be noted that Maxwell, which has a footprint in Germany, South Korea, China, as well as the United States, has other tech that makes it valuable. 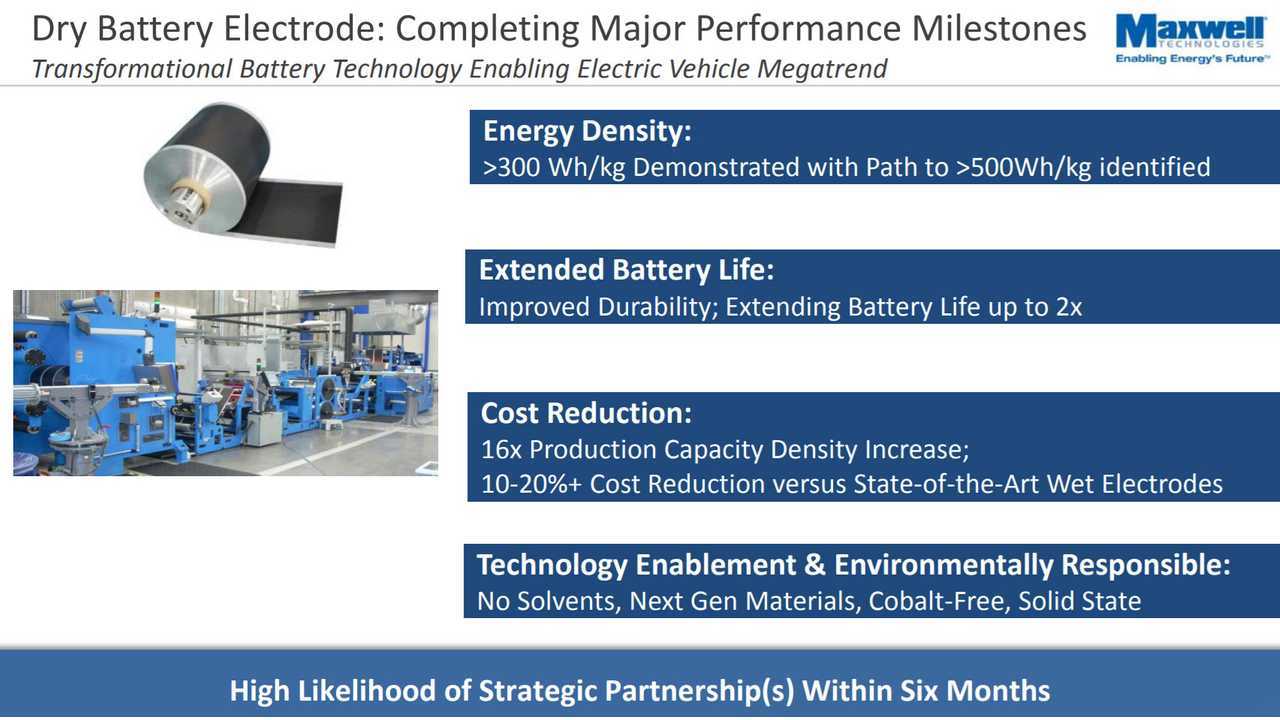 Besides making pseudocapacitors, a component that falls between a battery cell and a supercapacitor, it has developed a dry battery electrode with impressive energy storage potential. According to a slide (above) from the company's recent presentation (PDF), the tech has been demonstrated the ability to hold over 300 Wh per kilogram and could possibly go as high as 500 Wh/kg. That's a significant improvement over chemistries in today's top lithium batteries which are in the 250 Wh/kg neighborhood. The cobalt-free formulation could ease the way for Tesla to develop a solid-state battery.

While we think this could be a great deal for the California automaker, the market is less certain. Tesla stock plunged over $11 shortly after opening Monday, but has begun to recover and sits at $308.50 (−3.71 (1.19%)) as of this writing (it seems now the bounce in share price is related to news that Electrify America is buying 100 examples of the Tesla Powerpack). For its part, Maxwell Technologies is up to $4.58 +1.52 (49.35%). Check out the press release from Maxwell Technologies below for more of the financial details.

SAN DIEGO, Feb. 4, 2019 /PRNewswire/ -- Maxwell Technologies, Inc. (Nasdaq: MXWL or the "Company" or "Maxwell"), a leading developer and manufacturer of energy solutions, today announced it has entered into a definitive agreement (the "Merger Agreement") to be acquired by Tesla, Inc. (Nasdaq: TSLA or "Tesla"). Tesla will commence an all stock exchange offer for all the issued and outstanding shares of the Company (the "Offer"), after which the Company will be merged with a Tesla subsidiary and become a wholly owned subsidiary of Tesla.

The closing of the transaction is subject to the successful tender and exchange of shares, certain regulatory approvals and customary closing conditions. These terms, along with additional terms and conditions of the transaction, can be found in the Company's Form 8-K filed on February 4, 2019 with the Securities and Exchange Commission and in the Merger Agreement, which is filed as an exhibit to the Company's Form 8-K.

While there can be no assurances on the closing date, the Company anticipates that the merger will be consummated in the second quarter of 2019, or shortly thereafter, should all conditions be met and subject to the timing of the aforementioned approvals.

The Merger Agreement and the consummation of the Offer, merger and other transactions contemplated in the Merger Agreement have been unanimously approved by Maxwell's board of directors, all of whom recommend to the Company's stockholders that they accept the Offer and tender their Maxwell shares pursuant to the Offer. The directors and certain officers of Maxwell and I2BF Energy Limited have agreed to tender all of their Maxwell shares in the Offer, which in the aggregate represent approximately 7.56% of the outstanding shares of Maxwell common stock.

"We are very excited with today's announcement that Tesla has agreed to acquire Maxwell. Tesla is a well-respected and world-class innovator that shares a common goal of building a more sustainable future," said Dr. Franz Fink, President and Chief Executive Officer of Maxwell. "We believe this transaction is in the best interests of Maxwell stockholders and offers investors the opportunity to participate in Tesla's mission of accelerating the advent of sustainable transport and energy."