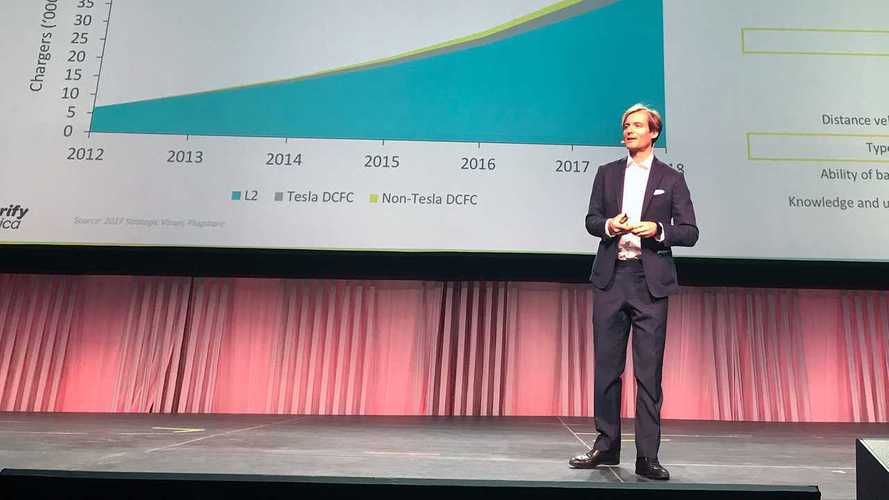 The plan for a new, massive network of ultra-fast chargers faces challenges. But it’s on track, according to Electrify America.

But the company has also encountered delays in California, opposition from competing charging networks, and hard-earned lessons about where to best install charging stations.

Despite the learning curve, Palazzo confirmed that by June 30, 2019, Electrify America expects to cumulatively have 300 stations on highways and at 184 metro stations, mostly 150 kilowatts, across the United States. “That means more than 2,000 dispensers by the end of our first cycle,” he said.

Only Two Percent Of The Job

Palazzo pointed to delays in California due to more rigorous oversight by the California Air Resources Board, as well as an onerous permitting and installation process. “The funnel to build a charging station is extremely long,” he said. “At the very beginning of a site acquisition, you go into permitting, which in California is an average of 55 days.” Palazzo said that finding the right locations that serve as highway connectors, and negotiating with site owners, can also be challenging and time-consuming.

Among its other learnings, the company discovered that it’s not cost-effective to install stations at multi-family dwellings. Instead, building 150-kW chargers at nearby metro stations,  grocery stores, hospitals or schools could serve hundreds of drivers – rather than a handful of drivers living at a condo.

A November 2018 staff report from the California Air Resources Board indicated that Electrify America’s investment through 2025 would only satisfy about 2 percent of the state’s EV charging needs in the state. Palazzo agreed with that assessment.

“The same holds true at the national level – despite the $2 billion investment from Electrify America,” he told me. “If you combine our contribution with EVgo, ChargePoint, SEMA Connected, EV Box, and you name it, then you arrive at about four to six percent of the need. So the question I have to the space is: Who will cover all the rest?”

The high-power, multi-dispenser stations being installed by Electrify America are expensive by industry standards. I noticed in the company’s documentation that these stations cost as much as $1 million each to launch. Rich Steinberg, the director or marketing and green cities for Electrify America, confirmed the high cost.

When I asked Steinberg (who previously worked on electrification at BMW) if the stations cost $1 million, he said, “Easily.”

Steinberg added that the locations have one DC fast charger and multiple other dispensers. “Could it be $2 million?” I asked. Steinberg replied, “I’m not the expert on that, but the targets are between a half and one million dollars.”

Electrify America, which is in regular dialogue with all the EV makers, has insight into the timing for cars that can handle higher charging rates. They are primarily from European, Korean, and Chinese automakers. “If you build up 50-kilowatt stations now, then it's very likely that you will be obliged to update that station no longer than 12 months,” said Palazzo. He explained that the emerging charging technology requires Electrify America to offer 150- to 350-kW charging.

Whether or not other players are similarly obliged, and the timing, is of course up to those companies. But Palazzo said that site hosts have the ability to choose multiple vendors. Electrify America does not require exclusivity for its sites.