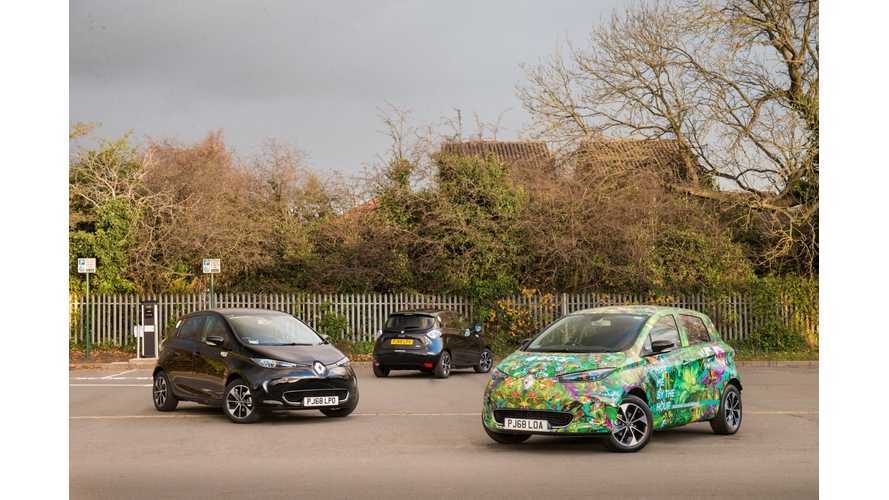 Over 5,000 ZOEs are included in European car sharing schemes

The French electric subcompact becomes popular in car-sharing services in Europe and operators seems to be happy with the outcome. Europcar, for example, is a returning customer - previously the company ordered 55 ZOEs in 2016.

"The UK’s leading low-emission car sharing club has reaffirmed the suitability of the all-electric Renault ZOE for its growing operation as its parent company, Europcar Mobility Group, orders a further 85 of the award-winning supermini.

E-Car Club – ecarclub.co.uk – has taken a number of units, supporting its expansion across the UK, from East London to St Andrews, Scotland. Through the innovative scheme, E-Car Club provides the public with a low-cost, hassle-free and environmentally friendly alternative to private car ownership and customers can hire a Renault ZOE from only £4.50 per hour, including power and insurance.

The majority of E-Car Club’s newly acquired, 40 kWh Renault ZOEs, will be used for a brand new scheme in North Solihull, which sees the popular EV available to members at nine locations throughout the region’s residential areas.

Local drivers can hire any of the new ZOEs, one of which has been wrapped in a distinctive ‘ECO Jungle’ livery, by simply signing up online. Completely self-service, bookings can be made via the E-Car Club website 24 hours a day, 365 days a year with customers gaining access to a ZOE simply by scanning their membership card against the windscreen. Drivers then unplug the ZOE from the onsite charger to experience all the benefits of all-electric motoring.

The rest of the Renault ZOEs will be used by Europcar to support its Deliver & Collect service in major UK cities. The use of the Renault ZOE works to significantly lower Europcar’s carbon footprint in these highly populated areas as well as reduce its operating costs.

The new order follows Europcar’s successful introduction of 55 Renault ZOEs for its Deliver & Collect logistics fleet in 2016, which at the time was the biggest ever UK order for the best-selling EV.

Europcar opted to extend its fleet of the 100 per cent electric, five-door supermini following feedback from both E-Car Club members and its own drivers. The ZOE has proved to be perfect for both its busy Deliver & Collect role and E-Car Club’s car sharing model, being immensely easy to drive and charge, spacious and boasting a very practical real-world range of up to 186 miles on a single charge. Notably, the reliability of the Renault ZOEs already on fleet also influenced Europcar’s purchasing decision.

Power is provided by the R110 electric motor and the Z.E 40 battery. The usability of the Renault ZOE is further enhanced through its flexible charging options."

“Since adding the Renault ZOE to our Deliver & Collect logistics fleet in 2016 we’ve found its usability has been a big plus for our operation. A vast array of our Deliver & Collect drivers use them, many of which have never experienced an electric vehicle before. The simplicity means that they can quickly familiarise themselves with the car. The instant response and fully automatic transmission also adds to a fuss-free driving experience in the often-congested urban areas in which our ZOEs operate. But more importantly they are playing a pivotal role in helping us to lower our carbon footprint and reach our goal of five per cent of our entire UK vehicle fleet being pure electric by 2020.”

“The Renault ZOE has always worked well and been popular with our members, it’s also been a great way to introduce the public to affordable, all-electric motoring. Our customers especially like how easy it is to use and, as we continue to launch in new areas, it’s highly likely that we will be adding even more to our fleet.”

“This sizeable order highlights not only the immense usability of the Renault ZOE, but also its suitability as the perfect EV to introduce drivers to the many benefits of all-electric motoring. We are especially pleased that through E-Car Club’s and Europcar’s deployment of its latest ZOEs that they will be making a worthwhile difference in lowering emissions and noise pollution in heavily populated areas.”