Mercedes-AMG One Gets Inspected By Top Gear: Video

The aerodynamic details are just as extreme as its F1-derived hybrid powertrain.

It’s been a little while since we saw the epic Mercedes-AMG One, but Top Gear is on-hand to help with an up-close look at the forthcoming hypercar. And it is indeed hyper in every sense of the world, from its complex active aero components to the hybrid powertrain and of course the F1-derived 1.6-liter V6 engine, screaming at the world with an 11,000-RPM redline. 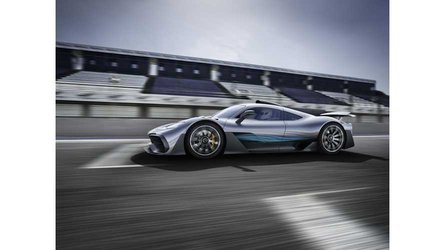 Mercedes-AMG Project One Made Not-So-Secret Appearance In Monaco 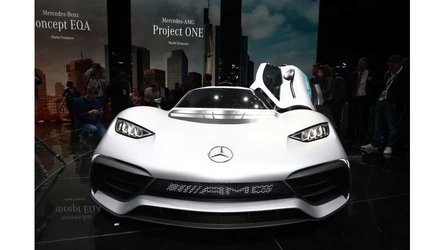 Mercedes-AMG Allegedly Decided Not To Build Project One Roadster

We’ve seen the car occasionally, but this detailed view is something to behold. The car is a case study on wind-tunnel testing and aerodynamics, and the video takes us all around the car pointing out various features. The deployable spoiler is something we see on other cars, as well as the fender flaps that open and close up front. We also see rear diffusers on many production cars, but we aren’t sure any of them are as big as the one utilized here.

The One’s center spine is special, however, as it helps optimize airflow before it hits that active rear wing. The spine also houses the camera for the car’s rear view mirror, and the intake scoop for the engine sits up ever-so-slightly from the roof to grab less turbulent air. But if you really want to know how serious AMG is about aero on this car, look at the iconic Mercedes-Benz star badge up front. It’s not a badge at all – the emblem is airbrushed on the nose because a small badge would affect airflow.

As a result of all this, Mercedes claims the One will produce more downforce than a full-on GT3 race car. Yes, it does have plans to run the One around the Nürburgring where – combined with its hybrid powertrain producing over 1,000 horsepower – it will almost certainly set a new production-car lap record. Apparently, the car has already turned some laps on the 'ring's shorter GP circuit, with Mercedes allegedly telling Top Gear that the One’s lap time is closer to an F1 car than people might expect.

If that holds true, the One should indeed be an absolutely incredible machine that's also road-legal with what appears to be a relatively comfortable interior. It also has the ability to run solely on its electric motors for short distances, and the mighty F1 V6 can be used as a range extender for the electric running gear as well.

Unfortunately, we still have some time in front of us before all these claims are put to the test. The first production models aren’t expected to arrive until midway through 2020, and each one of the limited-production examples is sold.