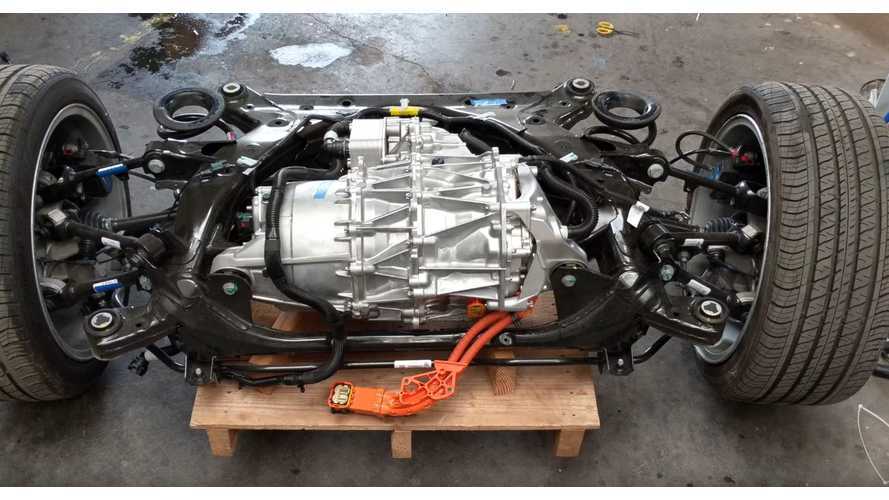 Videos come to us from Ingineerix, who several months ago shared videos of exploration of the trunk and underbody and as you might remember, showed this totaled Tesla Model 3 - this is the car from which the parts come from.

The first video presents the entire rear subframe, which houses the drive unit and suspension. The drive unit with PMSRM (Permanent Magnet Switched Reluctance Motor) and inverter can be seen in the next two videos.

As it turns out, the drive unit itself weighs less than 200lbs (around 90 kg). With a few hundred kW of power, it could be the new popular choice in various EV conversion projects around the world, especially since there will be an abundance of parts as Model 3 will be sold in a volume never before seen in the EV world.

This short clip shows the entire rear subframe complete with drive unit and suspension pulled from a salvage Model 3.

A short exploration of the bare drive unit removed from the subframe and with it's inverter removed. Before removing the inverter, I weighed the DU and it came in just below 200lbs. Halfshafts use the same spline and interface dimensions as S/X with the exception of the seal shoulder which is 40mm on 3 versus 44 on S/X. However, the seal OD (67mm) is the same, so you could swap in a seal from a S/X to use the heavier S/X halfshafts.

Note that Tesla is using 4 of these exact same PMSRM (Permanent Magnet Switched Reluctance Motors) in the Tesla Semi. Though the gear reduction part is totally different. Same rear casting in fact, even with the vestigial rubber mount that is not being used in the Semi.

This is a quick look a the guts of the RWD Model 3 inverter PCB. Impressive design!

Another set of videos are about the battery pack, high voltage system and cooling system. On the top of batteries is penthouse with Power Conversion System (on-board charger and DC/DC converter).

This is a short clip of the Model 3 74kWh battery pack pulled from a salvage. It's not a complete teardown, as I'd like to keep this pack sealed for a future use. More coming soon!

Shows how the Model 3 HV system is routed on the bottom of the car. The only part not shown is the connection for the charge port which is located on top. See this video for details on what's inside the penthouse: https://youtu.be/jm_tV8la-0c

Sorry for the fast camera movements, watch in 1/2 speed (Gear Icon down on the lower right) if you want to get it slowed down.

Shows how the Model 3 cooling system functions and is constructed. Sorry for the fast camera movements, watch in 1/2 speed (Gear Icon down on the lower right) if you want to get it slowed down.