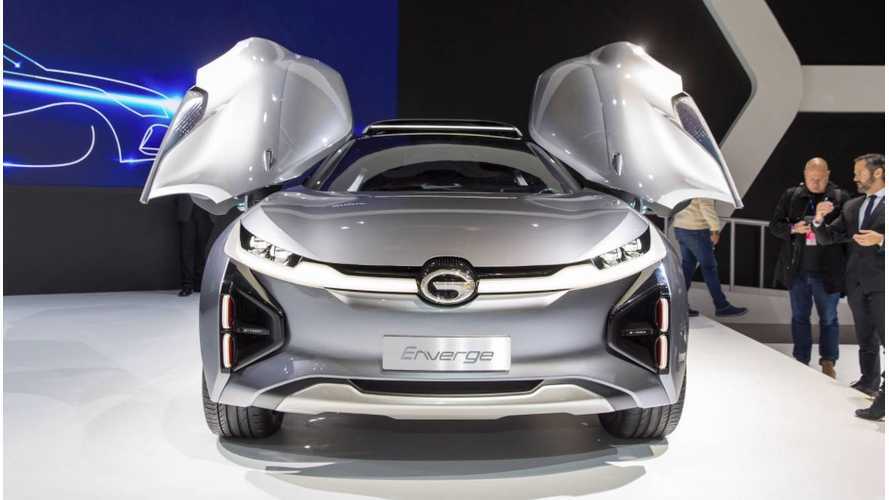 Those figures are almost surely not EPA-derived numbers though.

The Guangzhou Automobile Co. (GAC), China's 6th largest automaker, is coming to America, possibly as soon as late 2019. When it does, it may eventually offer an all-electric crossover with DNA that be traced back to the Enverge concept that it has just unveiled in Detroit at the North American International Auto Show (NAIAS).

According to Autocar, the concept is fitted with a 71 kWh battery over-optimistically said to be capable of achieving a 373-mile range. (One might expect a figure closer to 250 miles if rated by the EPA.) Featuring all-wheel drive, it boasts 235 horsepower and 302 lb-feet of twist which can propel it to 62 miles per hour from a dead stop in a startling 4.4 seconds. With a top speed of 99 mph, it would be capable of breaking speed limits, but not able to out run law enforcement if it does.

Of all the specs, charging speed is the most notable for a couple of reasons. First, GAC’s vice-president of engineering, Zhang Ian, says it can accommodate 240 miles worth of charge in ten minutes. We estimate that would translate to 160 EPA-standard miles in ten minutes, which is still pretty impressive.The kicker: according to The Verge, it can do so wirelessly. Now that we'd have to see to believe.

It's unknown, exactly, what parts of the Enverge may survive the translation to a production vehicle. It's quite unlikely, for instance, to be a coupe, and what doors it does sport won't open à la Lamborghini. Also, the interior won't have that aircraft-style yoke for a steering wheel, nor will those concept-y seats embrace the backsides of its passengers. It might not even be sold under the less-than-palatable GAC nameplate. Hopefully, the drivetrain, at least, would survive the process.

If an electric Enverge of some sort does appear in U.S. showrooms — with attendance at the upcoming National Automobile Dealers Association (NADA) annual conference confirmed, GAC is very likely to adopt the dealership sales model — it won't be complemented by other battery-powered vehicles. At least, not at first. Plans call for the internal combustion-powered GS8 SUV to be the first vehicles belonging to the brand to go on sale here.