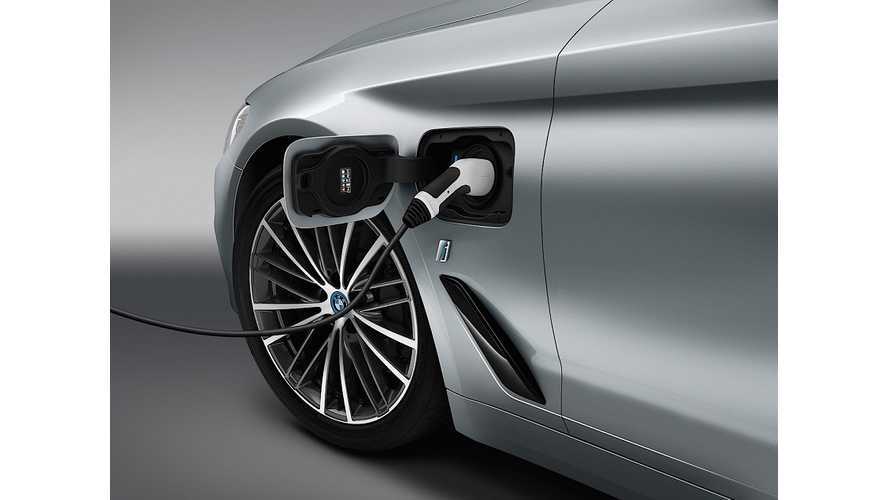 After an extended period of foreshadowing, the 2017 BMW 5 Series sedan lineup is now upon us; which truthfully we would not care about because...well, pretty much everything without a plug is dead to us. However included in the various 5 Series trim levels is the BMW 530e iPerformance.

As the "iPerformance" tag indicates, this 530e plugs in. Starting from this year, BMW now uses the iPerformance identifier to indicate when one of its traditional offerings has been electrified; which is handy because there are little other visual exterior clues (other than a charge port) to identify the 530e as a plug-in hybrid.

The above BMW-produced video will walk one through all the particulars of the brand, but we should note that the 530e iPerformance combines an electric motor and a 4-cylinder "TwinPower Turbo" gas engine, which the company says is good for "purely electrical, locally emission-free short-range driving with a dynamic driving performance".

What does that translate to in actual specs? Bearing in mind this information is via Europe...so put on your optimistic NEDC-rated goggles.

And as part of the new 5 Series lineup, other Tesla-like features such as Driving Assistant Plus and Remote Control Parking are now available (note the non-use of terms like autonomous or autopilot).

Driving Assistant Plus enables automated driving for things like traffic jams, slow moving traffic and of course - long journeys.  BMW assures that "...even when changing lanes, you are in good hands"

The BMW 530e is expected to arrive in March of 2017.  A full list of details on the new 5 Series lineup can be found on BMW's site here.