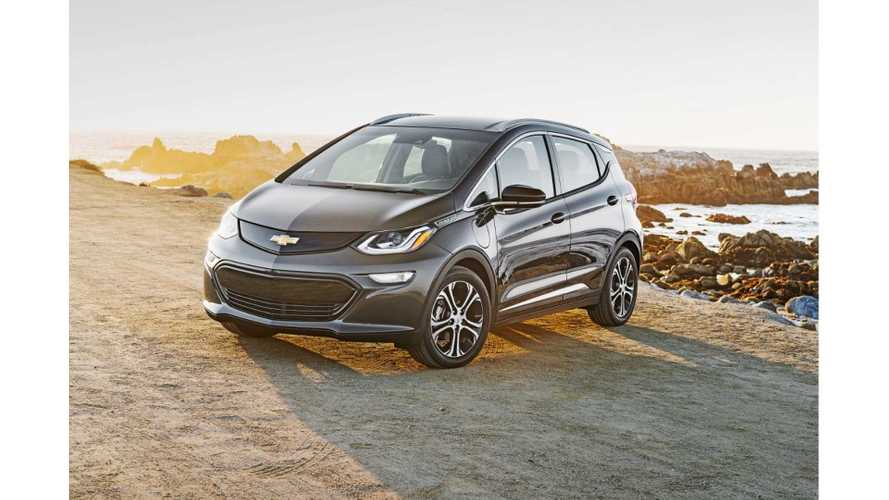 We say exceptional because, while Canadians typically get the short end of the stick for pricing compared to the US, the Canadian pricing is a decent savings over the $37,495 USD the Bolt EV was recently priced at in America.

With an exchange rate (at time of press) of 1.32 Canadian dollars equaling $1 USD, the Canadian pricing translates to $32,420 in the US.

In 3 Canadian provinces with rebate programs, the news is ever better (especially in Ontario), where the pricing is reduced further.

In Ontario, when applying the $12,839 rebate, the Bolt EV should lease from around $325 ($250 USD) with little down (~48 months) - a significant result indeed.  Unfortunately, that number will double for those finding themselves in locations with no rebates available.

Update (January 2017):  Ontario has adjusted its rebate program.  Now instead of the value being capped at 30% or $14,000 - whichever is lower, the 30% cap has been removed.   Meaning of course that the entry level Chevy Bolt EV just cheaper!

With the pricing set, the Bolt EV has now become the plug-in vehicle "value" champ in Canada when accounting for its abilities, as even its sister-car, the Chevrolet Volt is priced from $38,490 CAD, while the Nissan LEAF (30 kWh - 172 km) is priced from $37,398 CAD.

“Value is a hallmark for Chevrolet and the pricing of the Bolt EV proves we’re serious about delivering the first affordable EV with plenty of range for our customers. We have kept on our promise yet again, first on range and now on price.” - Alan Batey, president of GM North America and leader of Global Chevrolet.

Pricing on the Premier trim was not announced, however the Bolt EV's release timing was.

GM says to expect the Bolt EV in Canada in early 2017.  This date is also significant for those in the US outside of the initial "select dealership/states" roll-out, as it shows GM plans to quickly have the Bolt EV available throughout North America.

Here is a look at the two trim levels (and standard equipment) of the 2017 Chevrolet Bolt EV: