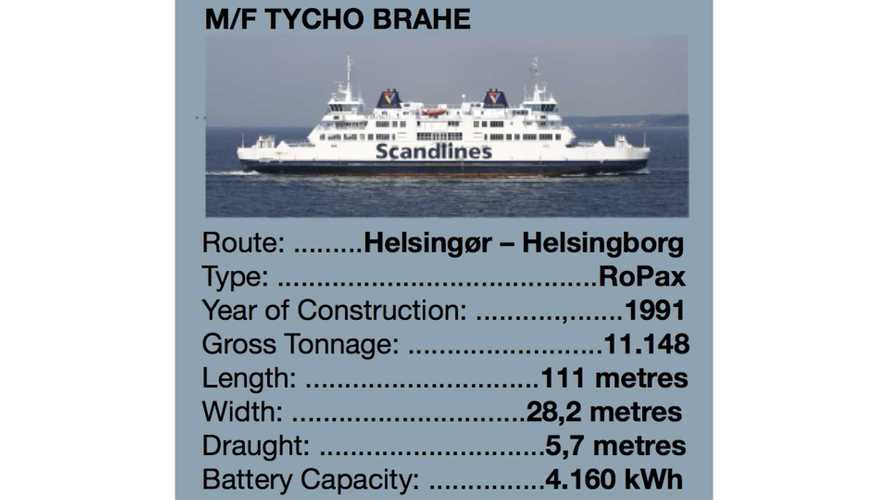 Two diesel-electric ferries (the Tycho Brahe and Aurora) are in the process of being converted to become the world's largest electric ferries, with diesel engines reduced to the role of back-up.

Especially impressive is the amount of batteries that will be used in each of those ferries - 4.16 MWH, that is equal to the batteries found in over 173 Nissan LEAFs (base).

The battery pack designed by Plan B Energy Storage (PBES) consists of 640 lithium-ion modules (6.5 kWh each) from XALT Energy. As one might imagine with the resources on hand with a boat, the battery will be water-cooled.

The project was supported by a 120 million SEK ($14.1 million) investment from the INEA, the European Union’s executive agency for innovation and networks.

Another great acheivemnt will be charging those batteries - the plan is to recharge some 1,200 kWh every short visit at port (5.5 minutes or 9 minutes), using  a ABB with 10 kV, 10 MW robot connection! There is an also an on-board transformer (10 kV to 800 V).

1,200 kWh of electricity will need to be available when two ferries from HH Ferries operating on the Elsinore-Helsingborg route convert to full battery operation next year. This will require automated charging and a unique cooling system for the lithium batteries.

Chimney smoke and engine rumble will soon become an old seafarer’s tale on HH Ferries’ two largest ferries operating on the Elsinore-Helsingborg route, which will be fully converted to battery operation next year.

The ferries ‘Tycho Brahe’ and ‘Aurora’ are now diesel-electric, and the diesel engines from Wärtsilä will remain as a backup – but after the rebuild, the electric motor that drives the screw, will be supplied by 640 lithium batteries placed in four 32-foot containers on top of the vessel between the two chimneys.

The batteries must be charged with approximately 1,200 kWh every time the ferries are at port. In Elsinore they have 5.5 minutes and in Helsingborg 9 minutes, therefore, there is no time to waste, which is why the charging process will be fully automated, says Henrik Fall Hansen – senior chief engineer on board of Tycho Brahe:

“Our main supplier, ABB, also makes industrial robots, and the plan is that we connect the high-voltage cables using a robot.”

The robot, an ABB IRB 7600, will be placed in a small area by the ferry landing.   When a ferry is approaching, the robot will receive a wireless signal telling it to get ready. A door will slide open as will a hatch in the side of the ship where the electric cables are rolled up.

“When the ship is approaching the dock, half meter before arriving at the port, the robot begins to reach for the cables and connect them to the connectors. As soon as we have moored the ship, we will turn off the power,” says Henrik Fall Hansen.

The robot orients itself using 3D laser scanning, and when it’s time for departure, the disconnection happens automatically.

‘The moment we want to disembark from the port and they press the button to raise the gate to the cars, the robot will also disconnect. It turns off the power, takes the two cables and puts them back on the ship and closes the hatches,” explains the chief engineer.

It is a magnetic clutch that holds the connectors in place, so if by mistake the ship should sail without disconnecting the cables, they will automatically drop when the ship pulls in the cables.

The power is transferred to the ship with 10 kV and 10 MW.  In order to provide the charging stations with this power, Elsinore Power Supply must begin burying 7 km of new cables within the city. On board the ship the power from the 10 kV is transformed down to 800 V, and is rectified to direct current (DC) before it is charged to the batteries.

Charging takes place at 3C – that is three times the battery’s standard charging rate – this puts great demand on the battery cooling system, which combined have a capacity of 4,160 kWh and weighs 80 tonnes.

Unlike other battery-powered ferries, air cooling has been ruled out, and instead a newly patented water-based cooling system from the Canadian/Norwegian company PBES is to be installed. Every time the charge on the battery is doubled, the heat generation is quadrupled, but according to PBES their CellCoolTM system can dispose of more heat than the ferry’s batteries are capable of producing.

Thus, the efficient cooling system, along with other safety systems, prevents overheating, also known as “thermal runaway”, in which the heat leads to a reaction between the cathode material and the electrolyte within the cell. This can cause the battery to short circuit whereby energy is released as heat, which accelerates the reaction, and the electrolyte eventually ignites and affects the surrounding cells.

The cooling system, which is produced at the PBES’ factory in Trondheim, contains built-in cooling elements within the holders surrounding the individual battery cells. They are produced in metal to ensure maximum heat transfer to the cooling water, and the circuit is connected to a heat exchanger outside each container.

During the 20-minute crossing the batteries are discharged by 29 percent – from 85 – 56 percent of maximum capacity. Hence there is a battery reserve, making it possible to sail in stormy weather etc.

“We could make two trips without charging, but it obviously reduces the battery life, the more you drain it,” explains Henrik Fall Hansen.

HH Ferries is the first shipping company in the world to introduce full battery operation on ferries as large as Tycho Brahe and Aurora, which can accommodate 1,100 and 1,250 passengers and 240 cars respectively, while sailing around the clock.

According to the company’s managing director, Henrik Rørbæk, the investment amounts to 300 million Swedish kr. (234 million Danish kr.), and the EU has provided a grant of 13 million euro, equivalent to 97 million kr.

At present, he dares not comment as to when, and if, the other three Elsinore-Helsingborg ferries – ‘Hamlet’, ‘Mercandia IV’ and ‘Mercandia VIII’ – are converted to battery operation.

“It’s a big investment, so we will evaluate it within the next few years, before we make a decision,” says Henrik Rørbæk.

The world’s first fully battery-powered car ferry was ‘Ampere’, which was put into operation on Sognefjord in Norway in the spring of 2015. Also, in the archipelagos of south Funen, a battery-operated ferry is on the way. It will sail between Fynshav, Søby and Faaborg.