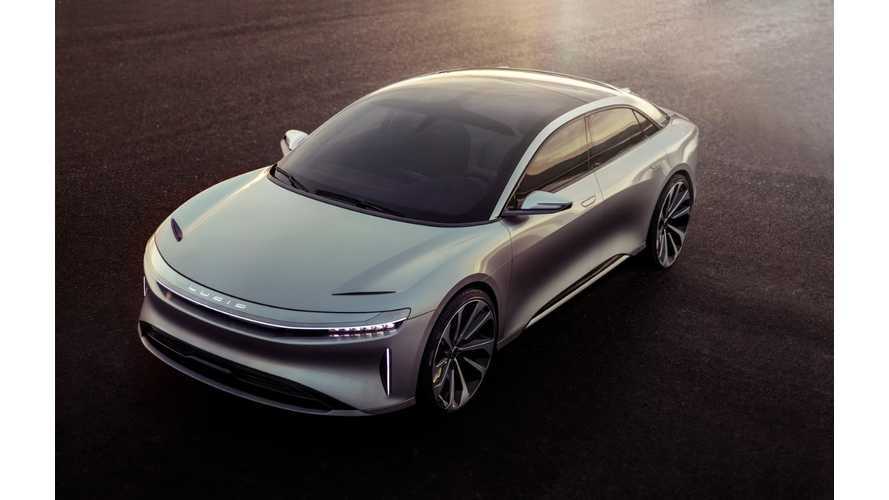 As promised Lucid Motors took the wraps off its first production-intent all-electric vehicle - the Lucid Air.

The company expects a well-equipped, $100,000+ Air to be in production in 2018 (from its announced ~$700 million factory in Arizona), and of course one can reserve a copy today.

And as expected, the standard car comes with a 100 kWh battery, with a 130 kWh option battery that has a ~400 mile range. Batteries are supplied by Samsung SDI.

Luicid's CTO Peter Rawlinson says the Air can be both a luxury and sports car.  With a couple electric motors combining for the 1,000+ horsepower, the Air will achieve 0 to 60 mph in about 2.5 seconds.

"Nearly ten years of battery pack development have led to best-in-class energy density. Our battery is capable of 1,000 horsepower and enabling up to 400 miles of range. Additionally, a unique battery chemistry provides breakthrough tolerance to repeated fast-charging."

The most obvious competitor in the space is the Model S, and like Tesla, Lucid says its care as "autonomous-ready" with both short and long range radar, cameras and Lidar.  Also, like Tesla the car will initially come with partial autonomy with more functionality added over time with over-the-air updates.

"Packaging perfection allows us to introduce unprecedented comfort via rear executive seats with up to 55 degrees of recline. This luxury option offers a first-class aircraft seating experience in the back of your car."

The interior features a large center touch console and a huge panoramic roof...and a lot of speakers.

"Without the masking sound of a gasoline engine, environmental noise detracts further from your luxury experience. The 29 speaker audio system with active noise cancellation and enhanced cabin isolation creates a uniquely tuned acoustic experience inside your vehicle."

We have to note that Lucid's charging set-up (pictured below) appears very similar to Tesla's home/destination solutions. No specs on DC fast charging or home/L2 charging where offered, other than to say the batteries can take all you can throw at them.

"Time is precious, so when charging on the go, you can get back on the road quickly. While many batteries age prematurely if fast-charged regularly, you can fast charge a Lucid battery at will without worries."

"Reserve 1 of 255 special edition cars first off the production line. Launch edition will be well optioned and include distinguishing features. Pricing and additional options to be finalized closer to start of production."

"Standard production models will be produced after the 255 launch edition cars are complete. Options and pricing to be finalized closer to start of production."

Bonus video (below): Lucid was also giving out "prototype drives" of the upcoming Air to media in attendance (in this case SlashGear)

A look at the Lucid Motors Air's drivetrain

Another look in the back

Another look at executive rear seating