With Longer Range BMW i3 Official, We Compare The New 94 Ah Battery To The Old 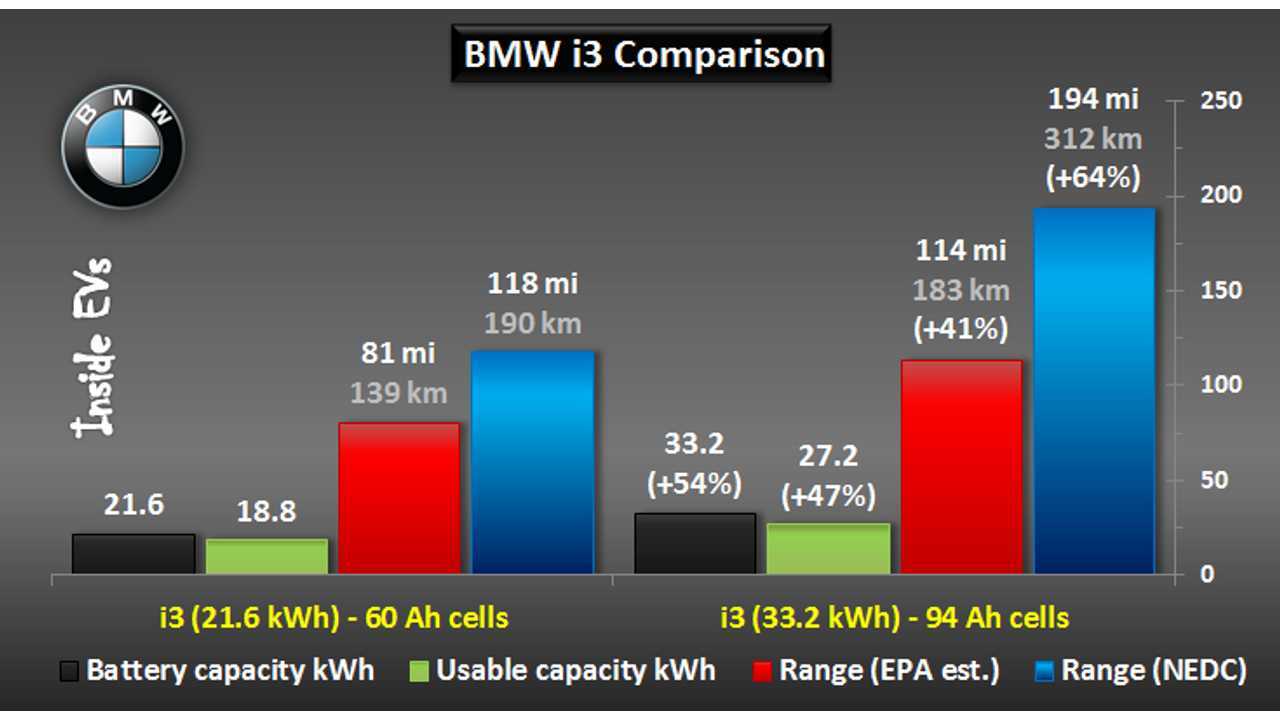 Visually The 2017 BMW i3 (shown here in black) Is Unchanged

This week began with major announcement of new 2017 BMW i3 with more energy dense battery cells and longer range.

The new i3 will enter market in late July and not all the data (prices, final EPA range) are yet officially known, but for know we can compare what we know.

The BMW i3 was previously equipped with 60 Ah lithium-ion battery cells (from Samsung SDI), that on the pack level stored around 21.6 kWh of energy (18.8 kWh were usable).

Now, the new 94 Ah cells are not only higher capacity, they are also more energy dense, so more energy is stored in a similar mass and volume - 33.2 kWh (27.2 kWh is usable).

Both BMW i3 versions (all-electric and range extended)will be available on the market in parallel.

With 60 Ah, the i3 is able to drive 81 miles (EPA). Estimates in BMW press release stand at 114 miles - 33 miles or nearly 41% more.  BMW has historically been a bit conservative, so the ending EPA numbers (noted as still pending) may see this number increase.

"The 2017 BMW i3 (94 Ah) has a capacity of 33 kilowatt hours (kWh) thanks to the higher energy density of the lithium ion cells. The BMW i team worked to ensure that the battery dimensions remain unchanged while still offering a significant range increase. Even in everyday conditions (2), the new Battery Electric BMW i3, in varying weather conditions and with the air conditioning or heating turned on, a range of up to 114 miles combined (1) (hwy/city) is possible as shown by independent BMW testing cycles(3)."

Regardless, increasing the battery capacity by more than 50% and thus extending the range well beyond 100 miles is pretty good deal, especially if we check price differences that we already do have confirmations on.

The prices of the BMW i3 models in Germany are:

Realistically, the price difference for a BMW owner (in relation to the MSRP of the car) is negligible, which leads us to conclude, the original (60Ah) i3 will only be around as long as existing battery supplies last.