Starting January 2017, All New Teslas Will Only Get 400 kWh Of Annual Free Supercharging, Small Fee Beyond That 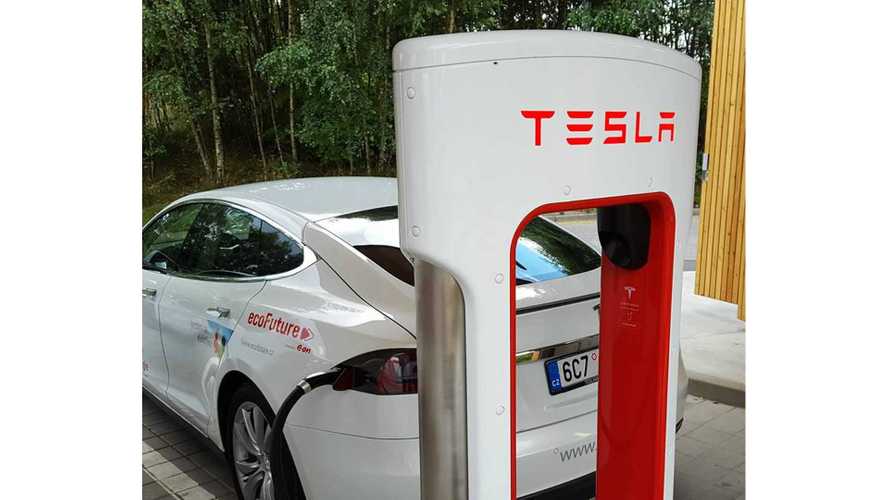 Just moments ago, Tesla put out a press release on its Supercharger program.

The release contains information on how many Superchargers are out there and on how those chargers have enabled Tesla owners to basically drive everywhere, but buried further down in the release is the news we all knew was coming:

"For Teslas ordered after January 1, 2017, 400 kWh of free Supercharging credits (roughly 1,000 miles) will be included annually so that all owners can continue to enjoy free Supercharging during travel. Beyond that, there will be a small fee to Supercharge which will be charged incrementally and cost less than the price of filling up a comparable gas car."

(full press blast from Tesla can be found below)

There was really no possible way that Tesla could continue to provide free, unlimited Supercharging - and with the Model 3 on the way, the automaker needed some method to limit use of Superchargers to their original intent of providing juice for long distance travel. We think that what Tesla has come up with is fair and reasonable and it should work to unclog Supercharger congestion.

Current Tesla owners are not affected by this change. And if you put your Tesla order in prior to January 2017 (and take delivery before April 1, 2017), then you too will enjoy free, unlimited Supercharging. We think this is a rather clever method for pumping up year-end sales.

Beginning with new purchases in January, the Supercharging Network will be paid access after first 400 kWh of use

In August, it was discovered that Tesla had already implemented a "Supercharger payment" section to its MyTesla page, allowing new owners under the program to 'top up' credits to use the Supercharging Network via a credit card - although at the time, it was thought to just be for future Model 3 users.

Earlier from Tesla’s annual shareholder meeting in Mountain View, California in June, CEO Elon Musk had given reasoning why the Supercharging Network had to be converted to a pay system - again in relation to the upcoming Model 3:

"… we wanted to make it really straightforward and easy, that’s why the Superchargers are set-up at least today – for people on board the car to travel long distances for life. Obviously, that has fundamentally a cost… The obvious thing to do is decouple that from the cost of the Model 3. So it will still be very cheap, and far cheaper than gasoline, to drive long-distance with the Model 3, but it will not be free long distance for life unless you purchase that package. I wish we could , but in order to achieve the economics, it has to be something like that.

What Tesla’s motivation is, to make electric transport as affordable as possible. That is what informs all of our actions. It’s not because we want to make things more expensive, it is because we can’t figure out how to make it less expensive. That’s all.”

In 2015, Tesla sent out "abuse" letters to those owners the company felt were using the Supercharging network excessively/not as intended by the company.

This change of policy for 2017 should eliminate the need for further letters, and will also help ease future congestion at many stations that may have otherwise been often frequented by individuals and businesses picking up multiple free 'opportunity' charges.

Tesla's release in its entirety below:

An Update to Our Supercharging Program

Four years ago, Tesla introduced the Supercharger Network – the world’s fastest charging solution – to enable convenient long distance travel. Today, more than 4,600 Superchargers allow over 160,000 Tesla owners to drive across the continental U.S., from the Arctic Circle to the south of Spain, and across all of the population centers in China and Japan, among many other places. Supercharging has even helped owners drive their Teslas around the world.

We’ve designed our network so that all customers have access to a seamless and convenient charging experience when they’re away from home, as our intention has always been for Supercharging to enable long distance travel. That’s why today we’re announcing a change to the economics of Supercharging – one that allows us to reinvest in the network, accelerate its growth and bring all owners, current and future, the best Supercharging experience.

Ensuring Use for Long-Distance Travel

For Teslas ordered after January 1, 2017, 400 kWh of free Supercharging credits (roughly 1,000 miles) will be included annually so that all owners can continue to enjoy free Supercharging during travel. Beyond that, there will be a small fee to Supercharge which will be charged incrementally and cost less than the price of filling up a comparable gas car. All cars will continue to come standard with the onboard hardware required for Supercharging.

We will release the details of the program later this year, and while prices may fluctuate over time and vary regionally based on the cost of electricity, our Supercharger Network will never be a profit center.

These changes will not impact current owners or any new Teslas ordered before January 1, 2017, as long as delivery is taken before April 1, 2017.

Just as you would charge your cell phone, we believe the best way to charge your car is either at home or at work, during the hours you’re not using it. For travelers, the Supercharger Network has become a powerful, unique benefit of Tesla ownership. As we approach the launch of Model 3, this update will enable us to greatly expand our Supercharger Network, providing customers with the best possible user experience and bringing sustainable transport to even more people.