Elon Musk Speaks In The Leading City In The World For EVs: Hong Kong - Video 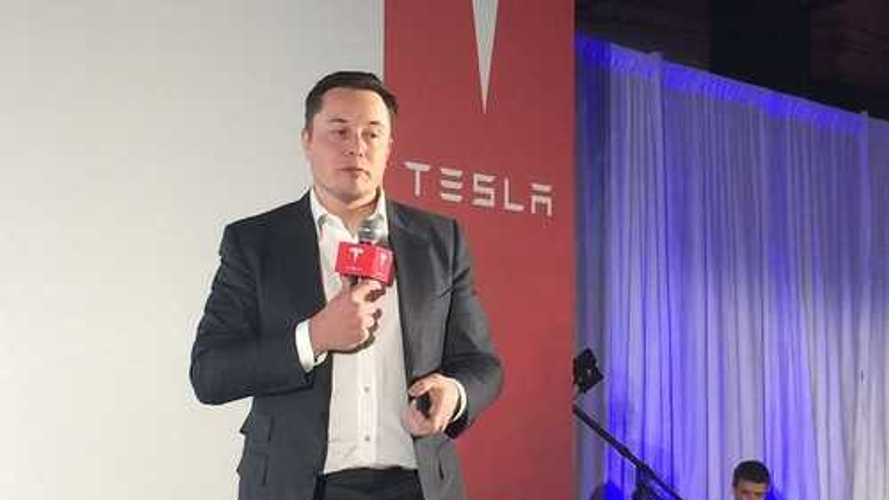 Elon on stage speaking to Hong Kong supporters for the first time.

Tesla Hong Kong invited owners to a special event on Monday for a chance to meet Elon Musk in person for the first time in Hong Kong.

The response from owners was phenomenal as online RSVP was closed off within a few hours. Even for those individuals who were able to reply, only about 200+ owners got confirmation with one additional guest could tag along (full event video + Musk speech below).

The event was held at the Kai Tak Cruise Terminal (located at the end of the old Kai Tak Airport runway that was closed down in 1998) where the first Model S launch also took place back in July 2014.

Valet parking was offered to Tesla owners and the scene was spectacular as they were all parked along the water front with the Victoria Harbour sunset view in the background. Guest were served with drinks and snacks while they were enjoying the sunset with a few brand new Model S on display.

Many guests had hoped they could see the first right hand drive Model X during the event, but were disappointed.

Party time at the event with food and drinks

After all guest had some time to mingle with other Tesla owners and to fill their stomach, the stage event finally began with the Tesla President of Global Sales and Service Jon McNeill entering the stage introducing himself followed by Elon Musk on to the stage.

The audience cheered with excitement and the moment where all the smartphones were raised over everyone's head to catch the first shots of the real Iron Man in Hong Kong.

As in most of his keynote Elon talks about the Tesla's mission and their vision towards producing a mass market vehicle like the Model 3.  He then went on to talk about specifics related to local development in this part of the region.

A few key take away from the event:

Alex Wai from InsideEVs at the special event

*- Right hand drive Model X expects to be available to Hong Kong customers in second half of 2016.

*- A new 100,000 sq ft service and delivery center is expected this year to improve service time.

*- The company will continue to increase charging facilities for owners as Tesla understands it is difficult to install private home chargers in Hong Kong.

*- Ludicrous mode and roadster upgrade packs will be available in the coming weeks for those who have pre-order.

*- Tesla is currently developing an app for owners to identify which Supercharging location has available charging stalls.

Stage scene before the keynote

Stage scene before the keynote

Additionally, Tesla will definitely spent R&D effort to use Hong Kong unique road system as a foot print to improve their auto-pilot system.

Elon himself will speak with local government officials while in Hong Kong about permitting the use of auto-pilot feature.