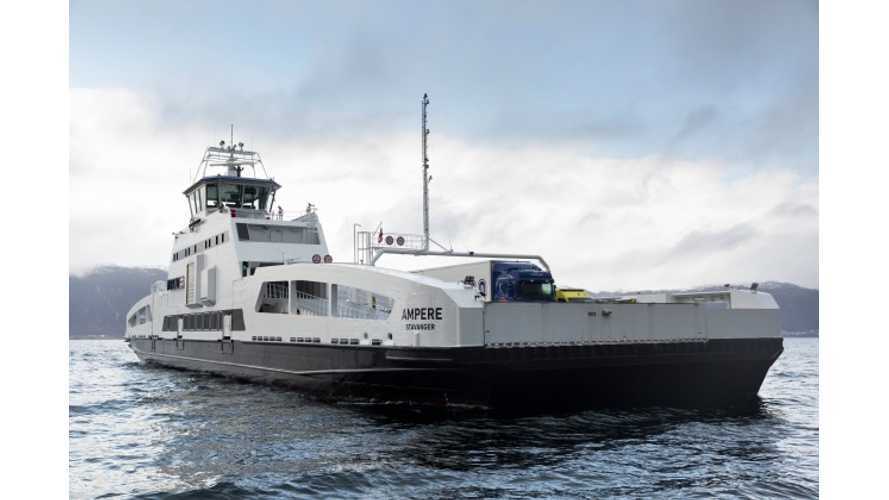 As we reported back a few months ago, the Norwegian "Ampere" hit the high seas (well, the ferry link across Sognefjord between Lavik and Oppedal, Norway, anyway) this month, according to the Seimens story, and is running just about the biggest Anderson-type-looking connector we could imagine.  Size matters, despite rumors to the contrary:

Big connectors for a big boat.

This sits on top of the charging station, also big.

Are we the only ones cracking up that this high-tech marvel of the 21st century engineering still uses spare tires as fenders on the dock?  Just checking...

The cooperative effort led to the creation of a fully electric ferry that travels across the fjord 34 times per day, with each trip requiring around 20 minutes to make the six-kilometer crossing. The ferry, which is 80 meters long, is driven by two electric motors, each with an output of 450 kilowatts. Both are powered by lithium-ion batteries. The batteries have a combined capacity of 1,000 kilowatt-hours (kWh), which is enough to make a few trips between the two fjord communities. After that the batteries need to be recharged.

The project also addressed the grid concerns we hear so much about in the skeptic circles.  Since the infrastructure in that area couldn't supply such a huge load during the recharge period required, they use massive packs on both ends of the route, acting as buffers - accepting slow, steady charging over the course of the day, and allowing full recharge of the packs at night:

... The 260-kWh unit supplies electricity to the ferry while it waits. Afterward, the battery slowly recoupes all of this energy from the grid until the ship comes back again to drop off passengers and recharge. The charging stations are housed in a small building about the size of a newsstand. The ship’s batteries are recharged directly from the grid at night after the ferry stops operating. This solution is both simple and ingenious. “Under the prevailing conditions, it was the only feasible way of building and operating a battery-powered ferry,” says Moen. “Otherwise we would have had to expand the entire grid, and that would not have been possible due to the high costs of such a project.”

According to Seimens, one of the overriding concerns in this project - started with a design competition over 5 years ago, was noise, and pollutants in the pristine waters of the fjord.

Bow-on: The Ampere plying the fjords

In addition, the boat is a ground-up purpose-built design collaboration, with "Fjellstrand’s knowledge of energy-efficient shipbuilding and Siemens’ electric propulsion expertise":

Despite its ten-ton batteries and capacity for 360 passengers and 120 vehicles, the ship is only half as heavy as a conventional ferry. That’s because it's made exclusively of aluminum rather than the steel normally used in shipbuilding. The ship’s corrosion-resistant structure also means it doesn’t require the special coat of paint that’s used to protect steel ships against rust. Its robust aluminum hull needs far less maintenance, says Moen. That too lowers the ferry’s operating costs. In addition, the ship’s designers searched for the most energy-efficient systems available.

Now, the dedicated reader will likely recall that Siemens' claim of this being the "world’s first electrically-powered car ferry" may be slightly, OK, totally exaggerated, but such is the nature of marketing in the EV world...  still, "World's biggest Anderson connector"?  You've got to give them that.