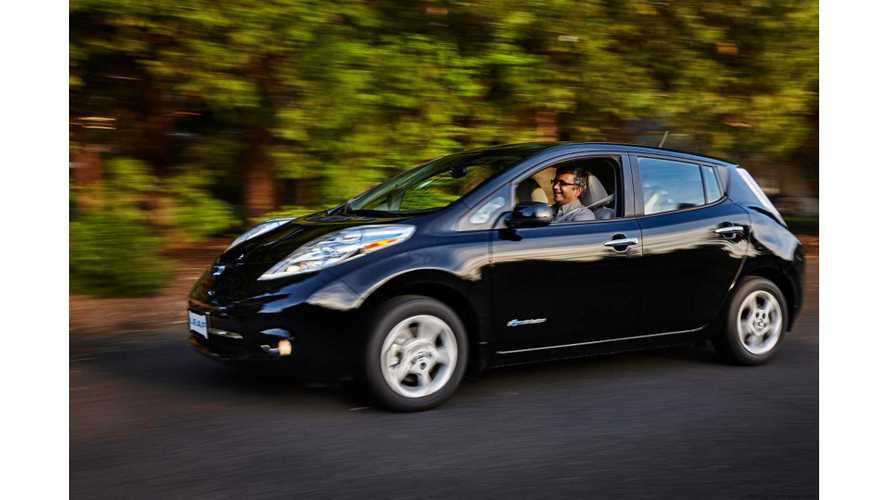 Nissan Erased Any Memory Of The LEAF's Facebook Page This Month. In Its Place? "Nissan Electric"  - Which Also Features The e-NV200

With the arrival of Spring, the thaw of oppressively low winter EV sales has also touched the Nissan LEAF, as 1,817 were sold in March.  The stronger showing was an improvement of 51% from February when 1,198 were sold.

This Senior Engineer And Portland Resident Was Selected By Nissan To Be The Symbolic 75,000th LEAF Sold In U.S. In March

During the month Nissan also celebrated its 75,000th LEAF sold in America, which was just about the time it also wrestled the crown away from the Chevrolet Volt for 'best selling plug-in in America'.

Both cars have been on sale now in the US for 52 months, with the LEAF now holding a slim 76,407 to 75,231 lead over the Volt.  Whether or not Nissan can hold off what is sure to be a hard charge from the next generation 2016 Volt in the Fall is still anyone's guess.

March's stronger result should assist Nissan in starting to return to their historical EV market share in America north of 20%.  For the first 2 months of 2015 that number had sagged to just 17.5%.

March's stronger showing also meant that the LEAF's national inventories dropped slightly in the US last month, the first such occurrence in several months, but still at a fairly healthy level just below 6,000 units on average according to our research.

Also of note, Nissan's LEAF Facebook page with over 360,000 "Likes" disappeared this month. In its place, "Nissan Electric" has appeared featuring the e-NV200 and e-NV-200 Combi (pictured above).  Could this mean that the all-electric van is coming to America?  How could it not?