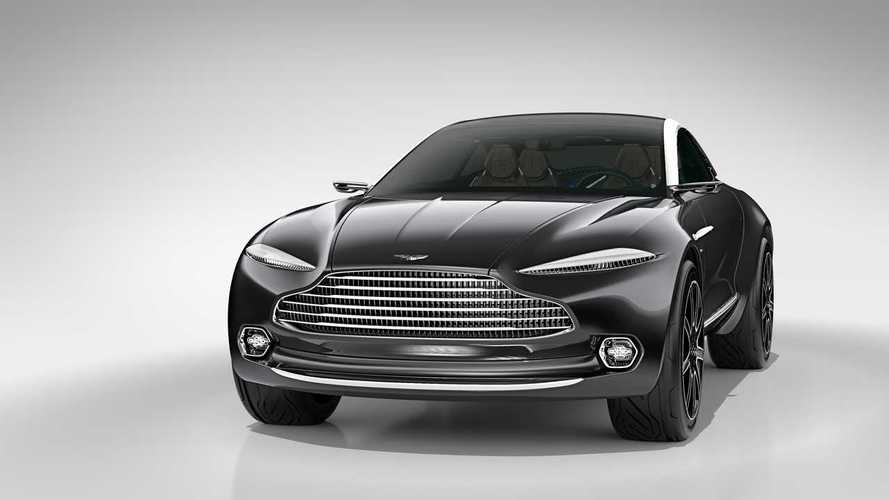 Aston Martin busted on to the plug-in electric car scene with this stylish DBX Concept on display at the 2015 Geneva Motor Show.

According to Aston Martin, the DBX Concept presents the automaker's idea of what could soon become reality.  That idea is an all-electric, all-wheel-drive Aston Martin that redefines the luxury GT segment.

"The DBX Concept is a challenge to the existing status quo in the high luxury GT segment. It envisages a world, perhaps a world not too far away, when luxury GT travel is not only stylish and luxurious but also more practical, more family-friendly and more environmentally responsible."

"I asked my team at Aston Martin to expand their thinking beyond conventions, to explore what the future of luxury GT motoring would look like in years ahead, and the DBX Concept you see before you is the result."

"This is, clearly, not a production-ready sports GT car, but it is a piece of fresh, bold thinking about what Aston Martin GT customers around the world could request of us in the future."

"The DBX Concept is more than a thought starter for us and for our customers, though. We will, in due course, be entering a car into the new DBX space and I am very much looking forward to seeing how this concept is received not only here today, but also by our legion of existing loyal customers and by those potential customers around the world who have, to this point, yet to consider one of our cars."

This is the same Andy Palmer who championed electric cars at Nissan for years.

There are only a few details on the mechanicals of the car.  Range is not mentioned, nor are battery specifics:

Embracing the very latest engineering techniques and theories, the DBX Concept needs no engine compartment thanks to its use of electric, inboard-of-wheel, motors powered by lithium sulphur cells.

We sure hope Aston Martin, backed by electric car supporter Palmer, introduces a production electric vehicle in the near future.  This would certainly challenge Tesla head on and competition can only strengthen the segment.  Bring it Aston!

3 March 2015, Gaydon: Aston Martin today challenges the nature of luxury GT travel in the 21st Century with the debut at the 85th Geneva International Motor Show of the innovative DBX Concept.

Created to defy conventional thinking about the luxury GT segment, the DBX Concept widens the appeal of the iconic British luxury brand and reaches out to a more diverse global audience than ever before.

Imagined by Chief Creative Officer Marek Reichman and his team at the brand's global headquarters in Gaydon, Warwickshire, the all-electric DBX Concept showcases not only cutting edge engineering but also a major evolution of the British brand's world-renowned and highly-regarded design language.

Capable of accommodating four adults in comfort, the DBX Concept also majors on day-to-day practicality. It offers generous luggage capacity by virtue of the fact that its rear trunk and forward load bay can both accept passengers' belongings.

Opulence and cutting edge style go hand-in-hand in the DBX Concept thanks to a unique fusion of high luxury and advanced technology. These characteristics, allied to the ingenious use of unconventional materials and finishes inside and out, are calculated to further broaden the appeal of Aston Martin.

The concept's exterior bright work emphasises the brand's approach to the use of authentic materials, and is made up of machined billet aluminium with visible milling lines in a piece of exquisite craftsmanship intended to be seen as the car's jewellery. The DBX Concept's unique paint finish – Black Pearl Chromium – has been specially created to mimic the look of a genuine black pearl, and comprises a micro-fine layer of chrome to deliver a level of reflectivity that cannot be obtained through normal paint finishes.

Inside, the deliberate use of non-automotive standard materials generates a uniquely soft, cocooning ambience. The extensive application of velvet-like Nubuck leather contrasts with the concept's hard, hi-tech equipment. The exposed leather reveals a sandwiched accent layer, more akin to high-end furniture, while the car's interior bright ware matches that of the exterior with the addition of a gold 'pin striping' element on the edging.

Embracing the very latest engineering techniques and theories, the DBX Concept needs no engine compartment thanks to its use of electric, inboard-of-wheel, motors powered by lithium sulphur cells.

Dr Palmer explained: "A concept car such as this should, in my view, challenge conventional thinking and explore the art of the possible. In the DBX Concept, I believe we have created a new type of luxury car that can not only broaden the appeal of Aston Martin to a whole new generation of customers, but sit with pride alongside the rest of our range."