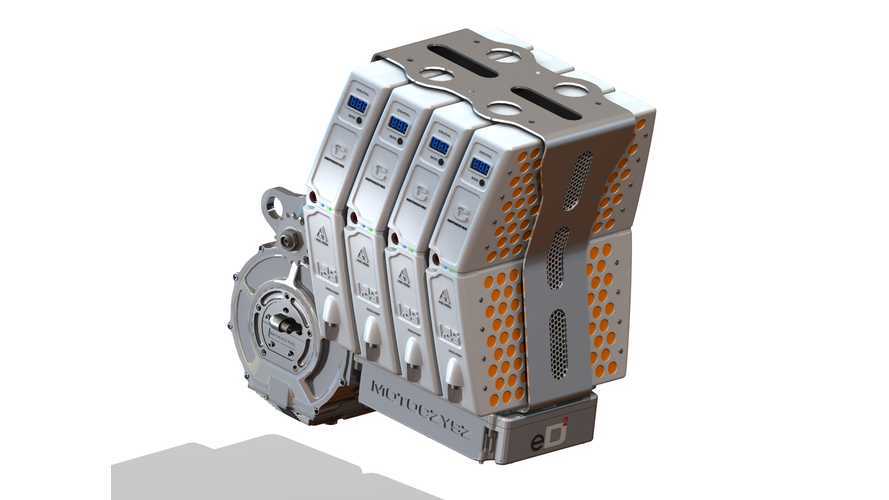 From the very start of high-performance electric motorcycles, we've seen virtually every player offer its own "electric drivetrain" package.  Brammo would have us believe there's enough demand, and a viable business model there to spin off its main product line, the Brammo motorcycle, to Polaris and concentrate on its own EV power train solution.

Which begs the question.  Have we seen any examples of a company shopping out a drivetrain to an OEM?  Let's look at the biggest small-EV drive players, and see what they've done.

The rendering above is from a Plugbike story back in 2010, when MotoCzysz started winning races with their 2009 ep1c bike, and they announced the "suitcase" drive package dubbed the "MotoCzysz Electric D1g1tal Dr1ve" system, or EDD.  Soon the bike morphed into something that wasn't using anything resembling this package, and today the company shows the "D1g1tal Dr1ve D1"  looking like more of a suitcase than their "suitcase", and boasting some specs that are now eclipsed by the rest of the electric superbike field, at 60kw continuous power output and, strangely, no energy capacity specifications.  We should also note, the graphics appear to be of around a 2010 vintage as well.

Are we aware of any application for this package?  No, we are not.  One would assume it would be fairly identifiable, visually, and we haven't seen it.  One would also assume that it would be identifiable by specifications, and we haven't seen anything that matches up there, either.  We're forced to guess the package may never have made it out of the rendering phase, though, by appearances, it may be the heart of this bike - the 2012 IOM TT contender:

Unfortunately, there's very little information posted on the site about any developments past this bike, or this power train.  (For details on the 2013 matchup between the E1pc and the Mugen bike, see this story on Autoblog.)

Moving on to the next motorcycle powertrain contender, let's look at Mission Electric.  Though the company has been through all sorts of corporate drama in recent months, (which we tried to report on here), one of their first moves after fielding their bike was offering their drivetrain work to other manufacturers.  Via a 2010 story in Greentech Media:

"The company has formally unveiled a program ...to sell electric drive technology to established manufacturers, according to CEO Jit Bhattacharya. Under the program, Mission will sell battery packs, motors, controllers and management software, along with other components, to other companies. The company will sell both complete drivetrain blocks as well as modular components.

But not all of the customers are motorcycle makers.

"It is a much more diverse vehicle set," he said. Hybrids, plug-in hybrids, trucks and buses could all end up with Mission's technology. Two large customers have already agreed to insert Mission's technology into prototype vehicles. Bhattacharya wouldn't identify the manufacturers, but he said back in February that China could become an initial test market for lithium-ion battery powered motorcycles. Japanese manufacturers, although wielding hefty name brands, were less interested.

The next-generation Mission R and RS bikes show a pretty unique motor/reduction gearing enclosure, and our reports are that they offer their own branded controller system, the MC600 Motor Control Unit.  Understand, however, having a manufacturer design and build a system and package it to your specs is as widespread a practice in this industry as in virtually every industry on earth.  Though the box says Mission, it could very likely be built by, say, Rinehart to Mission specs.  Here's where the question of who owns the design becomes important, and are we convinced that the Mission design is something an OEM couldn't just spec for themselves, if they were, say, Honda?

Let's move to one of the more interesting, and long-lasting players in the game: Zero Motorcycles.

Zero has been forging along with what has appeared to be a laser focus on building, selling, and supporting motorcycles.  Even their racing has been completely non-company efforts by employees and volunteers, yet, again in 2010, we got reports of them offering a drivetrain and getting funding for it.

Today, that looks like this: the Z-Force motor, the PowerPack, the add-on PowerTank, the app, all with the integrated BMS and modular design.

The motor has evolved over the last few model years from an off-the-shelf PMDC, to a PMAC unit made to Zero's specs by a US manufacturer, to the current design that is nearly 100% Zero's own work, and manufactured in China.  If that's not a proprietary drivetrain, we don't know what is.

Have they sold it to anyone else?  Not to our knowledge, and we're pretty sure we'd recognize that motor's anodized fins, and, again, its specs.  Just to be clear, we have tried to buy everything from the bits and pieces to the complete, plug and play system, and they're available.  Even to li'l ol' us in our garage.  We've got to assume the only company running the Zero drivetrain, as awesome as it is, is Zero.

Finally that brings us to Brammo.  With the Polaris buyout, Brammo is pitching their drivetrain through the BrammoPower site, and we get a pair of battery packs.  On the site, we're seeing listed partners in the rest of the segments, notably Parker, Sevcon, Team and Polaris, but we're not seeing specs on motors, controllers, housings or anything else.  We're forced to wonder if Polaris is their only customer, or they have a bunch in the funnel that they simply can't talk about right now.  Keep in mind, Brammo has farmed out much, if not all of their battery pack design and manufacture for a couple of years now.

Here's the issue.  A lot of this hinges on the battery technology, and that's a very fast-moving target.  The Zero battery packs are probably the highest performing packs to-date, and would be our choice if we were to look at a motorcycle-type application - that is, one where power-to weight, and energy-to-volume are the key considerations.  Still, we've got to assume that next year, the Zero packs will have evolved, simply due to evolving battery chemistry, making any powertrain work that's battery-specific pretty much moot.  Hanging your hat on building a cutting-edge battery pack, especially if you're not a battery manufacturer?  Not the best business plan.

Keep another thing in mind, too.  Virtually every company manufacturing li-ion cells of virtually every description also offers them packaged as modules, and with their own BMS.  You're going to compete with that?  Not likely, what's more likely is you're going to spec that, buy it from them, and brand it as your own.

One of the things we've learned over the years mostly from building our own electric-powered contraptions is that the so-called powertrain, or, in simpler terms, battery, controller and motor is, by nature, easy to package as a unit.  Your controller and motor are married parts and your battery pack is another module in that puzzle.  It's a natural to build a bike with your basic bike components, and be able to look at the drivetrain as one, interchangeable and upgradeable chunk.  With a few bike builds to our resume, we've run 6 different battery systems, and 4 different motor systems. Could we package a killer, cutting edge "drivetrain"?  Without breaking a sweat.  Could we sell it?  That's another story.  Has anyone actually sold it?  Not that we know of.  Ever.

We've got to conclude that, after all the work these companies have done, and the successful bikes and other products they've produced, shopping around an EV drivetrain "solution" is simply opportunistic, no-risk marketing.  They've got it, why not float it out there and see if anyone wants to buy it?  We do have confirmations that Harley's Livewire team went to Mission for help designing their drivetrain, though there's no way to really determine the extent of that help, and certainly, a lot of talent and brainpower has been hired out on occasion, from several talent pools, to help design specific products, but that hardly qualifies as selling drivetrain technology.

Building a business on solely an electric drivetrain?  We're going to have to conclude, "myth busted."