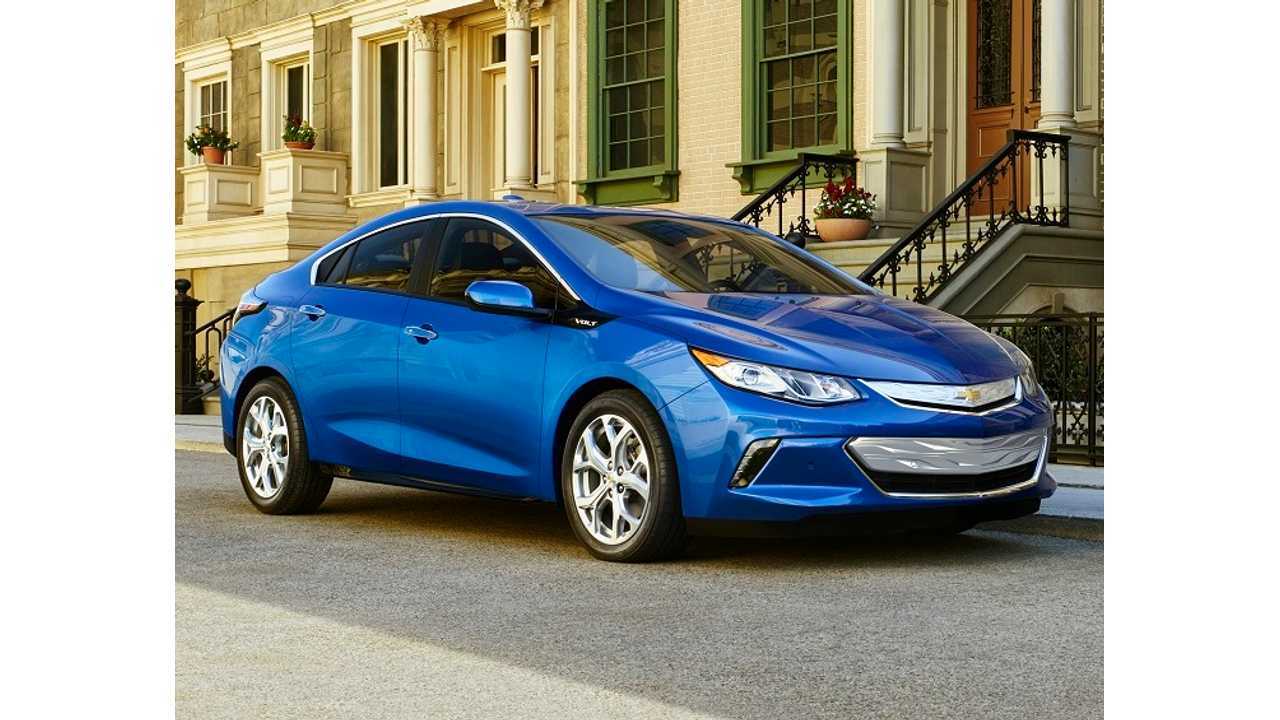 The Chevrolet Volt has long been considered the forerunner of the current plug-in revolution.  So when the original plug-in car turns the page on a new chapter, people pay attention.

Today, General Motors has taken the wraps of the 2016 Chevrolet Volt, and finally delivers all the next generation goodness that eager plug-in car buyers have been anticipating for so long now.

GM states that the 2016 Volt will achieve an estimated EPA rating of 50 miles of range from a larger, but lighter 18.4 kWh battery that features a new chemistry (192 cells vs 288 cells).  The new pack has 8% more capacity than the 17.1 kWh pack found in the current generation of car, but is more than 20 lbs lighter according to the company.  A check of the stats from last year show a net 32 pound savings on the pack overall.

“The 2016 Chevrolet Volt provides our owners with a no-compromise electric driving experience. We believe our engineering prowess combined with data from thousands of customers allows us to deliver the most capable plug-in vehicle in the industry.” - Alan Batey, president of GM North America.

As for when the car when the car will arrive, GM is only saying "the second half of 2015" - which looks like the 2015 will be undergoing a traditional product cycle and we will be seeing the 2016 around August.

Pricing as one would expect is also a mystery at the moment.  However, GM has strongly hinted at a lower starting MSRP than that of today's $34,345 (+$825 destination) figure.

Editor'sNote: Check out lots of additional videos and more pics of the 2016 Chevrolet Volt in our Gallery Recap here.

As for driving efficiency, the 2016 Volt gets 41 mpg (combined city/highway) in extended range mode and an overall 102 MPGe rating.  Those figures are up 11% and 4% respectively.   Also of note, premium fuel is no longer required.  GM says the new drive unit is 12% more efficient and weighs 100lbs less.

Editor's Note:  Full statistical fact sheet on the 2016 Chevrolet Volt can be found at bottom of this article.

“Volt owners complete more than 80 percent of their trips without using a drop of gasoline and they tell us they love the electric driving experience. Putting that experience at the center of the new Voltec system’s development helped us improve range, while also making the new Volt more fun to drive. We established a precedent when the original Voltec propulsion system debuted and this newest iteration sets the EV technology bar even higher.” - Andrew Farah, vehicle chief engineer.

Perhaps most importantly, is that the 2016 Volt can now seat 5 persons, albeit not too terrible comfortably (no one likes to straddle the battery 'hump') - but that was never the issue.  The fact you can seat 5 is a real selling bonus for the extended range car.   Heated seats in the rear and a heated steering wheel are also now available options.

Live From The NAIAS - What Everyone Wants To See - The Rear Seating!

As noted in early previews of the car, Regen on Demand™ (who knew that could be trademarked?) is now available and has moved to the back of the steering wheel.

Charging abilities are little changed.  Level 1 (120V @12 amps) takes 13 hours, while L2 (240V) takes 4.5 hours.  No fast charging options are available, but an illuminated charging port is now available.   The portable 120v cord set has also gone on a bit of a diet and is more compact that today's version.

The 2016 Chevrolet Volt Gets A More Traditional Interior

Interior dimensions are almost exactly identical to the 2015 Volt, with slightly more shoulder room in the front of the 2016, and slightly less headroom, but more legroom in the rear - the changes are so minute however, no one will be able to detect any changes of significance.

Dimensionally, although slightly larger in every aspect but height, the car is still classed as a compact - which is no surprise considering its share componentry with the next generation of Chevrolet Cruze.  Despite a larger size, GM has managed to shave over 250lbs from the car overall.

Here are the specs on sizing of interest (current generation in brackets for comparison):

GM also made the following notes on the 2016 Chevrolet Volt:

Using real-world experiences of today’s Volt owners, Chevrolet made the charging system in the next-generation Volt more convenient for customers to recharge the battery – and to check the charge status.

The new and enhanced features include:

“Owners will now be able to set their charging preferences exclusively for “home” charging and the vehicle will automatically adjust to that setting when it is at “home” based on GPS data,” said Farah, the chief engineer. “The new Volt will give owners greater flexibility for charging on their terms and make public charging easier.”

This will allow owners to pre-set their 120V charging level (eight amps or 12 amps) and whether they wish to charge immediately, set a departure time for each day of the week, or set a departure time and a utility rate schedule to charge only at off-peak rates. These setting will only have to be programmed once and the Volt willdefault to them when the vehicle return to its home location.

The next-generation Volt makes it easier for owners to confirm their Volt is charging and gauge charge status. The new status system features a specially designed tone that indicates when charging has begun, with additional tones for delayed charging. It will even indicate if the charge port door was left open after unplugging but before entering the vehicle.

With a glance through the windshield, an updated charge status indicator light on the on the top of the instrument panel will show the approximate charge level through a series of flashes. An available illuminated charge port makes it easier to plug in after dark.

A new 120V portable cord set has a simpler, compact design with more convenient storage location. The storage bin for the cord is now located on the left side of the Volt’s rear cargo area, above the load floor, for improved accessibility.

The new, active safety technologies and structural enhancements build on the Volt’s legacy of top safety performance, which include a 5-Star overall New Car Assessment Program rating from the National Highway Traffic Safety Administration for the current model.

GM is investing $435 million in the production of the next-generation Chevrolet Volt at the Detroit-Hamtramck Assembly Plant and at the Brownstown, (Mich.) Battery Assembly Plant, where its lithium-ion battery pack is produced.

Since its introduction in late 2010, the Volt has established southeast Michigan as the hub of vehicle electrification development and manufacturing. The next-generation Volt will feature approximately 70 percent U.S. and Canadian components within its first year of production, a nearly 20-percent increase from the first generation.